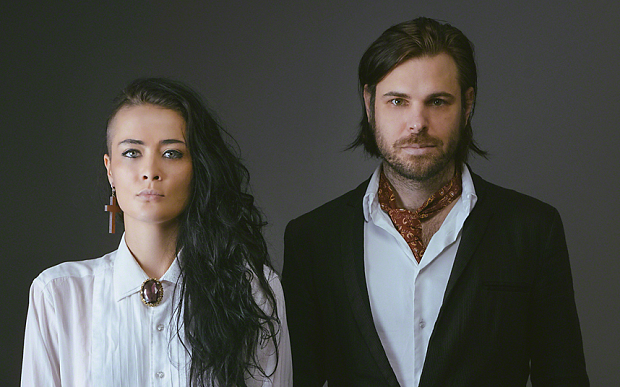 Well, there’s no doubt who has won the ‘best dressed’ competition tonight. This might be one grimly and fiendishly outfitted audience, with black leather jackets and tattoos the norm, but the man wandering around the crowd dressed as the Grim Reaper certainly takes the satanic biscuit.

But it’s that kind of night. Tonight’s headliners Saint Agnes, returning from a two year hiatus, cultivate the kind of spooky image that while not strictly goth, certainly toys with its edges. Luckily, there’s less adherence to said genre – not in the strictest sense anyway – in the London four piece’s music. Rather, they employ a bedrock of monster sized Zeppelin riffs and rock solid Bonham-style beats courtesy of their dreadlocked drummer Andy Head.

Guitarist Jon Tufnell – no relation to Nigel we can verify – provides generous amounts of sleazy slide guitar, lending the whole sound a deep south swampiness, meanwhile, as singer Kitty Austin alternates from airing her extremely powerful and commanding lungs at the microphone, teasing exquisite notes from a glitter-covered guitar and playing the kind of authentic Hammond organ style keyboards.

This is the official launch for their single ‘Sister Electric’, and they show considerable bravery in opening their set with its breakneck charms. They drop another new and slightly more restrained song called ‘Listening To The Phones’ later on, although it’s still jagged and jarring in a PJ Harvey/Nick Cave way and they’re rewarded throughout by big, big cheers.

Tonight’s support comes from Dolls and CuT, both going down very well despite very different approaches. Dolls are like a much smoother and better rehearsed version of riot grrrl band Voodoo Queens, or Deap Vally after a successful stay in rehab. It’s fun, with a surf influence more apparent, but seems a little too squeaky clean in such debauched company.

CuT, meanwhile, have the unenviable task of warming the room up at the ungodly hour of 7:30pm, but throw themselves into the task with the kind of abandon that is at the heart of all true rock ‘n’ roll. They appear to be chaotic – there’s certainly a lot of wild feedback and distortion going on – but at the heart of the storm lies a brace of truly memorable songs and stirring lyrics, like hearing The Clash and Ramones being given a psyche-rock kicking. By the time they’ve played their final song ‘Free Transmission’, their singer Dan exhorting people to free themselves and rise up in revolution, even the Grim Reaper himself is smiling.