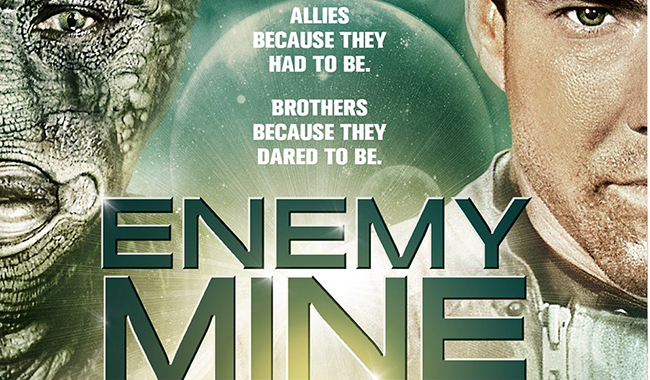 Wolfgang Peterson is one of the few directors to work within the studio system who worked across a broad scope of genre films. But back in the 80’s he made his way step by step out of Europe. Das Boot garnered him some serious recognition. He dipped his toes into the fantasy realms with The Never-ending Story, and here with Enemy Mine he had a go at science fiction.

Deep in space, war has erupted between mankind and a lizard looking race of creatures.  And as bad luck has it; one of each side (Denis Quaid/ Louis Gossett. Jr) crash land on an all but barren planet. Initially turning upon one and other, both are forced to work together to fend off being a meal for what lurks under the ground, and to get by on a daily basis. Both hate each other, but survival will only work if they work together – and through this hardship a bond is forged.

Anyone that has seen enough films can draw the obvious parallels between this and the John Boorman 1968 WWII drama Hell in the Pacific.

And this is where Sci-fi (and fantasy) works best; When it is all used as metaphor or a parallel with what is happening or has happened in the real world.

The trouble though is that Enemy Mine suffers from budget constraints that make the film look today rather laughable.  You might think some of the dodgy sets look like something out of a Star trek episode (And of course this story has also been told on that show.  The episode Darmok featuring Patrick Stewart and Paul Winfield take s along hard pee all over Enemy Mine).

Points have to be given to Louis Gossett Jr. for managing to perform beyond the makeup he is trapped under. And the make-up being the better part of the film.

Dennis Quaid’s array of crazy beards and wigs on the other hand will have you laughing. He was also perhaps not at his most seasoned best in this film as an actor – Despite this period being the time when Quaid got many of his kudos and long term fans.

The film ultimately drags and drags despite its hurry to get things going at the start.

The focus on more action towards the last act does little tom redeem it, and even a belated entrance from cult star Brion James does little to liven things.

The Blu-ray is probably the best you’ll see of the film. It’s still noisy and dirty in places which does not do much for the Masters of Cinema brand.  Perhaps in the hands of Arrow or SHOUT then we might have gotten a worked on print and a decent extras package.

This is likely to get the attention of 80s sci-fi aficionados, but they are just as likely to end up disappointed by the final film.