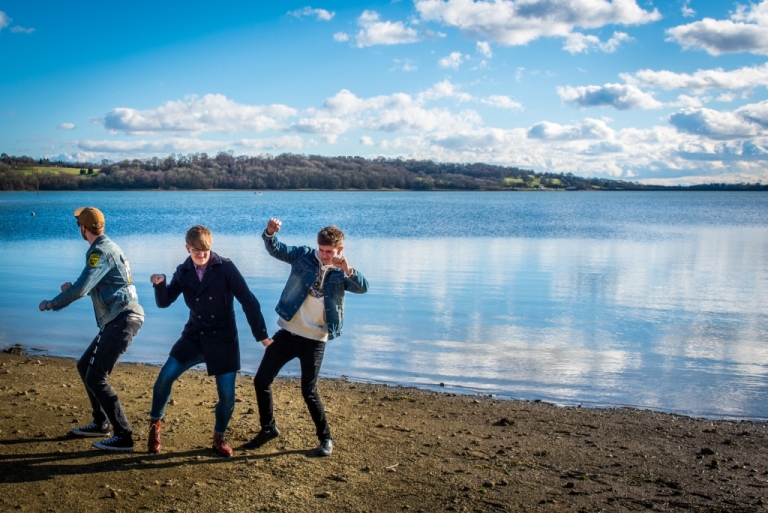 Welsh trio The Decoy release their debut album ‘Avalon’ on 29th July via Ghoulish Records, so we sent Glasswerk reporter Oisin Fogarty-Graveson along for a chat with Lewis Barber, front man of the experimental rock newcomers.

Hey guys, so you’re about to release your debut LP ‘Avalon’, how are you feeling about it?

“I think its a collective feeling of shitting ourselves hoping that people like it as much as we do. Its that whole debut album thing, the first time…NERVOUS man…”

What was your recording process this time around and how did it differ from Parasites? you worked with Chris Coulter (Reuben, Arcane Roots), what was that like?

“It was longer, so it was better, so it was more fun. We’re little Welsh boys so going to a big ass place like London is mad. Travel Lodge is definitely not as good as Premier Inn. Love the noise box that is The Coulter room. The man is a crazy finger dancer on the keys and makes shit sound FAT.”

I wrote a review for this record recently and I thought the most impressive thing about the LP was that you managed to write an experimental song like Black Mountain Radio and still have a catchy chorus that tied it all together. Can you tell us a bit about what went into writing that song?

“Ever played Fallout: New Vegas? Get you an Xbox, and play you that game. You’ll love it and probably it’d explain most of the song. But also, thanks for liking it. It’s a bit mental so the fact that it’s catchy is quite kind of you.”

Come to think of it, all of your songs throw out playful hooks, who generally writes the melodies for the vocals?

I was impressed by the juxtaposition between ‘freedom by definition has no fee, so if you cannot be charged you will not receive’ with ‘its all shit its all cunts’. It worked, don’t get me wrong, but you’ve gotta have a good sense of humour to write deep lyrics and throwaway ones in tandem ike that. How does that humour fit into your band outside of song writing?

We’em cunts. We’em loves it. Nah, it’s just funny innit? It can’t really be explained because I’m not really sure where the ideas come from, sorry. It just kinda births like a thing. But yeah, spend a day out on tour with us and you’ll experience the bat shit crazy world of the three of us. We did a gig in Bournemouth a couple of months back with a great promoter called George Fullerton, we spent the afternoon walking the streets playing Peter Tosh and then after a cracking gig in The Anvil we had an house party in his. What ensued involved a crocodile and werewolf onesie wrestling match between Blake (The Decoy Drummer) and George until 5 in the morning. That pretty much sums us up.

Despite the humour, there are without a doubt some serious messages in ‘Avalon’. What can you tell us about the meaning behind these songs?

They’re mostly about stuff that happens, and things that be, and general stuff. It’s just ideas really! There’s quite a few references to Pontypool, Cwmbran and Newport where we’re from, but some situations most could apply to their own areas. But again, thank you.

I couldn’t help but feel that there were moments when your music wanted to let itself go into a more prog or experimental direction, certainly the instrumentals could have gone that way pretty easily. Do you have a background in those genres? How did that inform this album?

Sorry, not sure. I think most of the sound comes from having a few random ideas and then somewhere they just all pop together like things. Prog is cool though, maybe prog could be a thing, but I think we like making short songs so they don’t get boring! I cant imagine us making long interesting songs like the prog giants have done. Wham bam thank you mam.

What’s on the cards once the record is released, are you planning on touring?

Yes. We got a whole of dates coming up around England and Wales including appearances at Underground Festival in Gloucester Guildhall on the 25th September and we’re on the Giant Squid Stage at Y Not Fest on Sunday 31st July. We’re also doing some headline shows as part of our album release tour, so we’re super chuffed with how things are going (see below for dates).

What’s The Decoy in concert all about, in a few words?