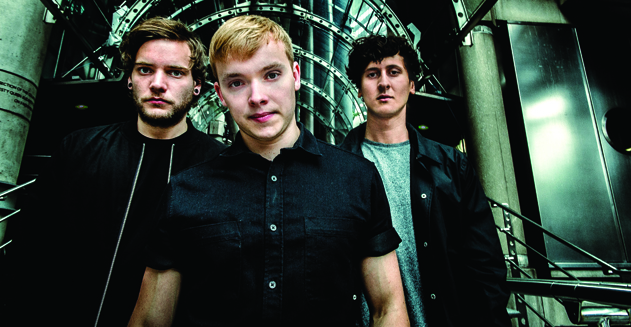 We sent Glasswerk reporter Jess Kempner along to 2000 Trees Festival this year tasked with a mission to speak to some of our favourite bands – to that end, we challenged Luke Caley from Crawley alt rock trio Press To Meco to complete an entire interview in just 180 seconds. Here’s how he got on:

2. Spider-Man or superman?
“Haha Lewis (drummer) will be literally screaming Spider-Man right now, but superman is like the ultimate unstoppable force. But then I feel like relationships could be a massive problem if you were Superman, just like trying to do simple chores round the house “Superman dearest, could you open this jar for me” then you like apply 1% of you strength and smash the jar into smitherines, so probably Spider-Man … was this supposed to be quick fire?”

3. Now you’re a little bit warmed up, it’s the start of another epic festival season, what bands are you looking forward to seeing this summer?
“I can go one better and tell you the bands I thought were awesome. Basically, Refused are one of the best bands I’ve EVER seen. If there was anyone there watching their set, doubting the recognition and respect they have, I’m sure that performance would’ve absolutely flipped that thought on its head, like seriously amazing. I was also blown away by The Xcerts. I’ve always liked a few of their tunes and wanted to catch them for a while, I think their set at 2000trees was particularly special though. Like, a couple proposed and the singer started crying on stage. It was sick. Dinosaur Pile Up, SikTh and HECK were WELL good too. Apart from that we’re playing a festival called FORTFEST which looks proper sick. Our mates FOES & Max Raptor are on the bill along with Lonely The Brave and Arcane Roots.”

4. Are there any bands at the moment that you wish were on a line-up with you?
“YES! PUP! I’ve been a big fan since their first album but genuinely think their latest release is even better. My album of the year so far. Adam and Lewis love them just as much and I think we’d fit really well on a bill with them. Apart from that a tour with ACODA, Allusondrugs and MaxRaptor (basically the Scuzz TV tour + ACODA) would be the best thing ever.”

5. 2000 trees is notorious for being awesome and the ultimate chill festival. What one luxury couldn’t you live without whilst touring?
“This sounds really sad, and I hate that it’s this, but it would probably be my phone. Like the amount of times an out-of-date sat nav sends you to the middle of nowhere, you have to call venue owners and promoters in emergencies or even just to keep people up-to-date with changes on the tour and basically EVERYTHING to do with touring revolves around being contactable and connected now. So it would definitely be that. Also, when you’re a week or so into tour and you start fancying your band mates it’s nice to hear your girlfriend’s voice.”

6. Do you have a favourite song of the moment to play live?
“Yeah! We’ve just started playing a song off our debut album called ‘Ghost’, it’s going down really well in the set at the moment and just like loads of energy short n sweet! ‘Affinity’ is always fun to play too.”

7. There has been some scandal on social media at the moment about people not bothering to turn up for support acts to shows anymore, what do you think about this, and what’s your message to the people that are doing it?
“It’s tough because often support bands are so average and they’re only there due to some kind of industry politics that have worked in their favour. BUT you should always get to shows to check out support bands, ALWAYS. If you don’t like them you don’t have to watch them. But I discovered Oceansize by turning up early to see Coheed and Cambria when I was like 14 and everyone would’ve recently bared witness to our friends Black Peaks supporting Deftones at Wembley. If they aren’t two examples to persuade you I don’t know what will!”

8. What’s coming up for you for the rest of 2016?
“WRITING WRITING WRITING then recording our second album! We’ve got a couple of really cool shows dotted around before then too though so check them out on our website – presstomeco.com“