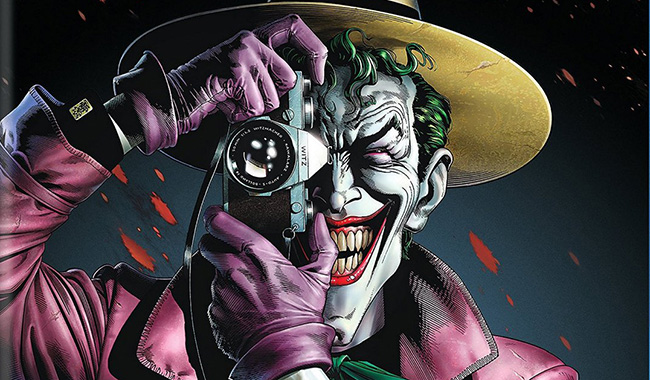 Finally Warner Animation has got round to doing The Killing Joke. Many of the well known Batman graphics novels have been covered including Year One and the Dark Knight returns. Both of which say the animation style adopt the style of the respective comic.  So with that in mind, fans have been salivating at the idea of this one coming about.

But then someone had different ideas.  First up is the fact we must address right there is that this film does not really adhere to the visual style of the comic.  Sure the shots look familiar, ir slightly altered. But by and large this is like the budget version of the animation provided. In places it looks down right cheap, devoid of detail which robs viewers right there of the thrill of seeing one of their favourite comics on screen.

The second issue which the internet has been aflame with for a while now is the fact that they have tacked on a clumsily written (and preposterously characterised) 30 minute prologue centring mainly on Barbara Gordon as Batgirl.

Ok so The Killing Joke section runs at about 40 minutes in length, but it isn’t like Warner Brothers have not released a Batman disc of this short length in the past before?  Fans would hardly have felt robbed so long as the story was adapted correctly.  Plus you can always throw in plenty of extra features to pad that package out, or just reduce the price of the download slightly.

Instead we have to follow the end of Batgirls career as an on the streets crime fighter. It’s a take it or leave it bit of crime fighting that commits a truly ludicrous development between her and Batman that just seems so out of place – Particularly from batman’s perspective.

You can if you like skip this and start the show (as this reviewer did on their first pass) to the moment where the Killing Joke actually begins (just over 30 minutes in) and the story is there intact. But as previously mentioned the animation is simply just not up to it.  There are well known writers and producers on board who have delivered better Batman animated films, but the guy they put in charge of directing it isn’t up to the challenge.

But we also have to point a finger at the voice acting in many places as well. The interpretation is devoid of the hard drama that is demanded of this story and often the line readings from the comic are weak (and yes we do mean Mark Hamill as well here!).

It’s a true disappointment for something that we have been waiting for so long.

The extras on the blu-ray have a few behind the scenes chatting heads about the comic and a couple of added Batman: The animated Series episodes. But you won’t want to return to this any time soon after.