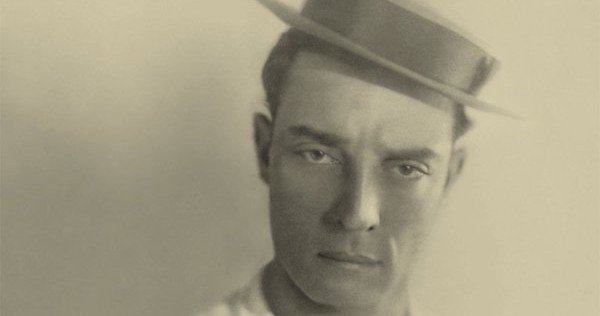 Breaking it down I would argue that there are two giants among the myriad of silent comedians. The word genius is
probably a moniker that it is used all too readily, but this title can certainly be levelled at the likes of Charlie Chaplin and Buster Keaton. Both men knew how to set up a gag and both knew how important their music hall/vaudeville background was. Keaton came from a vaudeville family where he was not averse to being tossed around on stage by his father. His early films, almost half on the re-release of Eureka’s box set of Keaton’s shorts he teamed with one of Hollywood’s most tragic of comics, Fatty Arbuckle who in 1922 was accused of raping and leading to the murder of a Hollywood wannabe at a hotel party in San Francisco. Arbuckle was cleared but his career and reputation were in tatters. He had begun working with Keystone as one of The Keystone Cops and was the more experienced of the two when he made these films with Keaton. Yet between 1917 -1920 Keaton and Arbuckle were a double act and were very much on an equal footing and, despite his large size Arbuckle was able to be as adroit as the slim stone faced Keaton.

From 1920 Keaton was on his own and produced his finest work, honing his craft and his inventiveness with extremely physical gags. His shorts would be two reelers that lasted approximately 20 minutes. He would defy any logic with regards health and safety and his athleticism was clearly apparent in all these films. One of his best known and dangerous sight gags was in One Week (1920), his second solo film and one of his best in which a house front falls on him with the upper window going over him and thereby meaning he is not crushed to death. This dangerous gag was calculated to the centimetre and would later be repeated on a bigger scale in Steamboat Bill Junior (1928). One Week is also a fantastically constructed story about a newlywed couple who move to a lot where they receive a flat pack house that is built by numbers. Naturally a jealous lover moves all the numbers around with Buster constructing a strange shaped house filled with obtuse angles.

Many times Keaton would expand on gags, honing his craft until he was able to make the film a perfect construction. But he did not only play with characters and situations but was able to fill the screen with people in the streets and alleys. In Cops (1922), in a case of mistaken identity and taking things at face value he seemed to have the whole police force chasing him, turning into a whole mass of people on the screen and allowing him to choreograph a whole crowd rather than a stunt. This made The Keystone Cops a very poor relation indeed. In this and many other films such as The Boat (1921) and The Balloonatic (1923) Keaton was able to use the situation he was in as props that would revolve (him) around his world where houses, boats and air balloons would be something to control against the odds. This was also true in Cops in which a chase across a ladder becomes athletic stunt work. Of course others such as Harold Lloyd also did this but whereas Lloyd’s stuntwork was largely an illusion, Keaton’s was all too real. Lloyd also had a tendency to be very sentimental, as also of course was Chaplin. Keaton would play one of life’s downtrodden, a fighter who refused to let anyone beat him and that is how he always came across on the screen as a kind of übermensch if you like.

This collection of 32 short films, mostly two reelers of which 13 were with Fatty Arbuckle is as complete a collection of Keaton’s shorts as you could get and have been beautifully put together by Eureka! in their Masters of Cinema series. While some of the soundtracks, such as the new one for Coney Island (1917) with its irritating song grates and spoils the enjoyment or the new intertitles this collection should be a completests version with even a few alternate endings. As well as coming in as four disc box set it is also replete with a 184 page booklet and numerous recorded essays by the likes of David Cairns as well as a couple of commentaries on some of the key films. Given the age of the films the quality of some of the films is variable, especially the older films but never the less to have a silent comedians entire oeuvre still existing is extraordinary in itself.