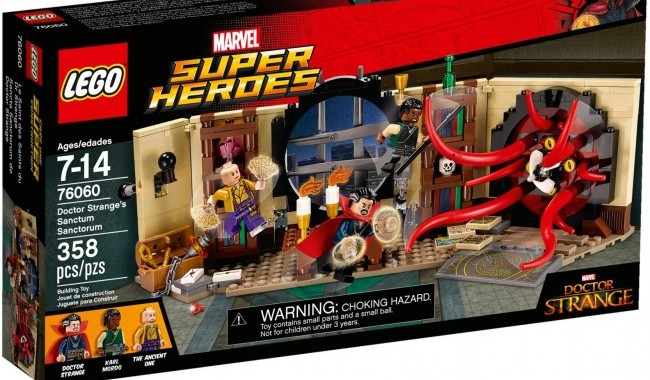 The latest Marvel Superheroes set comes in advance of the next MCU movie Doctor Strange due to release in November this year. Much of the content of the movie is unsurprisingly still unclear, but it appears to circulate around the origin story of Doctor Strange where Stephen Strange (Played by Benedict Cumberbatch) learns his mystic skills from sorcerer known as the Ancient One.

The Sanctorum Sanctum set appears to be placed very similarly to 2015 Ant-Man Final Battle (76039). Lego seems to have a real push to release at least one set for each new Marvel movie coming out. This is a nice way to expand the Lego Marvel line up while not necessarily committing too heavily to movies that might not end up more than introductions to characters in the Marvel Cinematic Universe.

The three minifigures included in the set are a fairly safe selection being Doctor Strange, The Ancient One and Karl Mordo who traditionally at least is one of the main villains in the Doctor Strange stories. The figures are more based on the look of the characters in the available material from the movie rather than on their comic book looks.

Doctor Strange minifigure is very striking with his red cape with a high collar and lots of detail all over him. The costume seems a good likeness to the one seen in the movie trailer although I’m not sure there is any way to capture Cumberbatch’s face in Lego form and the hair definitely seems wrong. The costume in this iteration is very dark blue which contrasts nicely with the bright red cape and there is a lot of subtle colour in the detailing giving the figure a nice 3D feel. There’s no doubt Strange himself is the strongest of the minifigures in the set and it definitely captures the essence of the character from the trailer as well as the comic books.

The Ancient One has been reimagined in the movie as a woman and the set follows the look as a whole. Tilda Swinton plays the character in the movie and the look takes inspiration from Tibetan Monks with her bold head and bright coloured robes. The Lego iteration follows the bold head and gold robe, though the darker parts have been created in bright purple which certainly isn’t obvious from the trailer. She also gets very nicely detailed fan pieces with very intricate runes printed on every fold. The Ancient One’s look in the movie is certainly completely different from the classic wizard look of the old comics but the movie look does work. However, I’m not entirely sure if Lego have really got the printing of the clothing quite right on the figure and while it does retain some of the noticeable features it doesn’t look that familiar to what we’ve seen so far.

Karl Mordo, better known as Baron Mordo is another student of the Ancient One who as mentioned above is traditionally an enemy of Doctor Strange. However, looking at the trailer, perhaps the movie is set on a time period before him becoming the enemy as he seems to be friendly with Strange. The costume on the character this time is a dark green robe with gray legs and tan arms. Again this doesn’t appear to look like what we can see on the trailer, but I was able to find a promotional picture from the movie set which clearly is the source of the look for this figure. In a typical Lego fashion, the colours are much brighter and the arms do appear to be gray in the picture as well but these are pretty minor faults. Again the detail is very crisp and colourful and I love the way the printing perfectly transitions from the torso part to the legs making the details appear whole. Lego really has mastered the art of printing these super detailed costumes that would have seemed impossible in the early days of Star Wars sets for example.

It is interesting to wonder if Lego took the view that Baron Mordo really was the villain of the movie based on his comic book status and therefore ignored Kaecilius played by Mads Mikkelsen who appears to be the main antagonist in the trailer at least.

The usual superhero set either includes a vehicle or a play set style mix of objects from an interior but the Sanctorum Sanctum instead features a set style wall with the classic Sanctum Sanctorum circular window, book cases, table and most obviously a huge monster coming through another window or perhaps a portal on the wall. This makes the set an amazing display set as well as a play set.

The most obvious feature is the monster with long tendrils coming through the wall. The design of the monster is simple but very effective and has one of the only traditional play features included which allows you to move the tendrils by rotating a wheel from the back of the set. The way the tendrils are set up, if you follow the instructions closely, also means that the tendrils open and close allowing it to grab a minifigure which makes the feature a very cool design.

The circular window seems a minor background item at first, but it’s amazing how accurate the hash design familiar from the Sanctorum Sanctum in the comics is. The construction couldn’t be simpler either with just some large blade parts crossing the window frame on the rear side of the opening.

The book cases and tables are pretty familiar designs from many previous sets and add a lot of character to the set without making it too busy. There is also a lot of paperwork mess in the form of maps, books and letters scattered all around the space. These also take most of the stickers included in the set, so there is only one larger sticker included which is the ramp piece in front of the monster.

There are a few other play features which in my opinion are not that successful. First we get two opaque sticks which allow you to make the minifigures fly in the space. Similar features have been done before on sets, but I’m not quite sure what the point of them here is. If the set is for display then they are not really needed and if you are playing with it, then it would seem much more flexible to just make the characters fly by hand as usual. As the pieces are opaque they are not that distracting, but for display purposes I would certainly consider removing them from the set, and it must be noted that this will be difficult to do without breaking down the entire set if included during the build.

Finally we have what can only be described as a ball on a stick that pokes out from the left-most wall of the set. The box art reveals this to be some kind of floating coat hanger for Doctor Strange’s cape, but I can’t imagine any scenario where you would want to take it off the figure. Perhaps to make this work, they should have included another cape in the set or left it out entirely.

As expected there’s nothing complicated in the build and the set can be completed very quickly with no previous Lego experience. As mentioned though, it’s worth paying close attention to the tendril positions during the build just to enable the squeezing action when the wheel is manipulated in play.

The Doctor Strange’s Sanctorum Sanctum is an interesting addition to the Marvel Superhero line up. It has a very different feel reminiscent of fan created vignettes you can find online such as the Ideas set The Big Bang Theory (21302) that got made into a retail version.

It’s nice to see Lego try different styles of set for even the more established themes. Doctor Strange’s Sanctorum Sanctum is a definite winner in my book. It manages to do a small set with just 358 pieces into something that will really look good on display while still retaining plenty of playability. The movement in the tendril monster is very well designed and there are no breakable walls anywhere in sight which really is a standard in play sets nowadays that is starting to feel a little tired.

The minifigure line up is just about right for a small set like this and the quality of the figures is as good as it can be to get the set out before the movie is even released.

As I mentioned in my previous Superhero review, the Marvel line up really has produced many of the best Lego sets out this year with its ever growing cast and innovative set designs. Long may it continue!