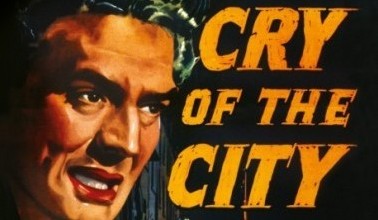 Cry of the City DVD Review

Victor Mature made two film noirs in the late 1940s. Kiss of Death made in 1947 and Cry of the City, now released by BFI and made the following year in 1948 is the other. Mature in many ways was the Sylvester Stallone of his day with his big body builder appearance (after all he would also play Samson in 1949) and his stony features. One thing with Mature was that he was quite self deprecating and often stated that being an actor was just a job. But here he shows that is not quite the case, for although he was never a great actor he does convince in Cry of the City. The film opens with a hardened criminal called Martin Rome (Richard Conte) who has been taken severely wounded to a prison hospital to recover from gunshot wounds. He was found at the scene of a crime that resulted in the death of a policeman. Delirious, while in prison he is visited by his fiancee (Debra Paget) and a slimy lawyer who he attempts to attack. He is also questioned by a police lieutenant (Mature) who incidentally grew up with the criminal in the same tough side of the streets but, like James Cagney and Pat O’Brien in Angels With Dirty Faces (1938) the men choose different paths. With the help of an old lag and prison trusty Rome escapes to find who has framed him for the theft of a horde of jewels. He finds his first clue with the lawyer who had visited him, but does find the jewels in the man’s safe. In the ensuing struggle, the lawyer is killed, as his secretary accidentally. Still injured, he then makes his way back to the loving embrace of his family, including his younger brother Tony, who idolises his older brother. Once again shaking off the pursuing police, Rome is helped by an old flame (a young Shelley Winters), a doctor who illegally patches him up and the other villain in the piece, a rather rough masseuse (wonderfully played by Hope Emerson). Can Martin Rome find redemption or will his past catch up with him?

By the late 1940s  Robert Siodmak, the German filmmaker who had emigrated to Hollywood brought with him the style of German Expressionism and in doing so applied the shadows of these films to film noir perhaps most memorably in The Spiral Staircase in 1945. In 1946 Siodmak had also made The Killers, the film that introduced the cinema to Burt Lancaster as well as many others with its strong noir crime story with femme-fatales and revenge. Cry of the City was not the best film noir, nor indeed was it Siodmak’s best film noir, but it as an interesting film. Where possible the director had shot as much of the film as possible on the streets of New York. The same year as this film was made The Naked City has often been reported as the first crime film shot almost exclusively on the streets with a narrative that takes on a police procedural drama with a semi-documentary feel. Many films would follow this line and where possible film the shadows in the same Expressionistic style. Another key example of this was Panic in the Streets (1950), that in many ways drew upon both styles of Cry of the City and The Naked City.
The film also boasts some good performances including a usual solid one from Mature, as well as a strong lead from Conte who we see, in the lead role as an anti-hero, the man who should be the villain of the piece having a more layered and complex character than crime films would normally offer. We see the world from his perspective, even though he is quite a selfish individual who will even sell out the loving bosom of his family. Elsewhere, in an early performance Shelley Winters plays his ex-girl, the tart with a heart who helps him out, who although in the film briefly has quite a key performance. There is also the virginal and sweet angel that is Paget, Conte’s girl. but best of all is Emerson as the rough masseuse who, despite the Production Code has insinuations of being a low rent hooker or masseuse who offers extras. Emerson is the direct nemesis and equal of Conte’s character and perhaps comes across as the most despicable of all and does it so well.
Cry of the City is an unusual release from BFI, but a welcome one. The picture is clear bringing out the best of the shadows and has a good rack of extras including an appreciation of the film by Adrian Wootton.
Chris Hick
Share
Tweet
Pin
0 Shares