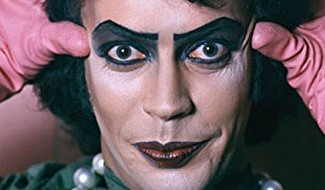 In Munich there is a relatively small cinema called Museum Lichtspiele where every Saturday night continuously for the past 30 years the cinema has screened The Rocky Horror Picture Show where people come dressed up as their favourite character and hurl objects and lines at the screen while the film is playing. Although this little fact is not mentioned in Dave Thompson’s book, ‘The Rocky Horror Picture Show FAQ’ it goes quite some way to give an example that this film from 1975 is still a huge cult success. The musical film taken from the fringe theatre London production was made at a time when it sat on the threshold between Glam Rock and Punk and brings in both these elements and, as the book points out was a big influence in characters who were at the centre of punk who would watch Rocky Horror avidly including Toyah Wilcox and Joan Jett and The Runaways (years later Joan Jett’s ambitions would be realised when she appeared in a successful New York production in 2000 as Columbia).

‘The Rocky Horror Picture Show FAQ’ is not as the title suggests a kind of encyclopaedia of the musical and film but as with other books in this series, presents a history of its making and coming into being as well as its legacy. The book starts by giving a leftfield history of controversial theatre in London from the late sixties through to the 1970s when musicals such as ‘Hair’, ‘Oh! Calcutta!’ and the play ‘Romans in Britain’ pushed new bounds in nudity, sex and sticking the finger up to the establishment on the West End stage. This was the background to which ‘The Rocky Horror Show’ came into being and began its life at the Upstairs Theatre of one of Britain’s greatest theatres for new productions, The Royal Court Theatre in Sloane Square, the theatre that saw the likes of John Osbourne’s plays first performed. The background to the show before it became a film is a really interesting and, dare I say zeitgeist story in which a couple of émigrés from Australia, Richard O’Brien and Jim Sharman met in London and would pursue their dreams for music and acting aspirations. O’Brien even acted as a stuntman for a while and was a stuntworker on such films as Carry On Cowboy (1966) before aimlessly drifting through the late 1960s and early 70s. It was seeing an offbeat and eccentric play by American actor and writer Sam Shepard (yes, that Sam Shepard) called ‘The Unseen Hand’, an almost Dadaist homage to science-fiction that inspired Sharman and O’Brien to write their own musical that was originally titled ‘They Came From Denton High’. Shepard’s play was also shown at the Upstairs Theatre of The Royal Court Theatre.

For those who are not familiar with the story of The Rocky Horror Picture Show the story opens with conservative straight laced Brad and Janet who become lost one stormy night and find themselves at the castle of Dr. Frank N Furter and his household of freaks including Riff Raff and Magenta. Over the course of the night Frank N Further brings his buff creation Rocky to life and corrupts Brad and Janet as Frank proves himself to be the most transsexual transvestite in Transylvania. It’s classic, campy stuff but more than this it’s sexually challenging and breaks down a lot of boundaries in sexuality. It immediately became a sensation when it played in Chelsea but once it went stateside and played on Broadway it bombed drastically. It failed elsewhere too and looked like it might not survive, besides the original Frank, Tim Curry was a tough act to follow.

And then the film came along using most of the original cast including O’Brien as Riff Raff and Patricia Quinn as well as bringing in the likes of Meat Loaf who played Eddie in the Los Angeles production. Shot at Bray, appropriately the former studios of the old Hammer Films the film proved to be a cult favourite although this would also take a few years. The film opens with the blacked out face and red lips singing ‘Science Fiction Double Feature’, Sharman and O’Brien’s homage to the science-fiction and horror films they grew up watching in their childhoods and the musical/film would go on to present the world with many famous lines and scenes including the now legendry ‘Time Warp’ routine and Frank N Furter greeting Brad and Janet at the door of the castle with the simple greeting “You’re wet!”. It is perhaps the Glam Rock number ‘Sweet Transvestite’ that most defines the age and the film itself. Yes, horror films are the influence but the breakdown of sexual taboos is the films message. The song itself, impressively sang and performed by Curry is pure Glam Rock. More recently it and the film/musical’s influences can be seen in such films as Velvet Goldmine (1998) in which gender bending and the disappearance of a camp star is pure Ziggy Stardust/Frank N Furter. The homage to both Bowie and Rocky are evident throughout. The musical and film Hedwig and the Angry Inch (2001) is another example of taking huge influences from Rocky in a story about a gay East German who goes to the United States and becomes a transvestite rock star.

The Rocky Horror Show’ has had a chequered history and Thompson’s book puts that across very well, although the title of the book would perhaps be better called ‘The Rocky Horror Show FAQ’ as it focuses more on its theatre life than as a film. However, it is at its best when talking about the musical during its development, as well as theatre in the period and through it becoming a film and global sensation leading to the cult followers throwing objects at the stage and dressing like their favourite characters to go and see it both at the theatre and the cinema. The book’s title is somewhat misleading as there is less focus on the film and more on its theatre production history. What is evident is how difficult the casting of Frank N Furter is with Curry still the best known to the point that anything he would appear in after would be referenced against Rocky. It was also difficult for Sharman and O’Brien to follow this up with anything equally as successful (the sequel or follow-up, Shock Treatment made in 1981 was not a success). Others would go on to play parts in ‘Rocky Horror Show’ interpretations such as Gary Glitter (ew!), Jason Donovan, Anthony Head from the soapy 1980s Gold Blend commercials and of Buffy fame, Adrian Edmondson, Anita Dobson as well as the sickly Eurovision couple Bardo. Other productions are likely to come to the stage but hopefully there will never be a new film version.

As mentioned the title of the book is something of a misnomer but this is undoubtedly a well-researched book telling the story of the musical and film up to the present day but there could equally have been more on the film itself.