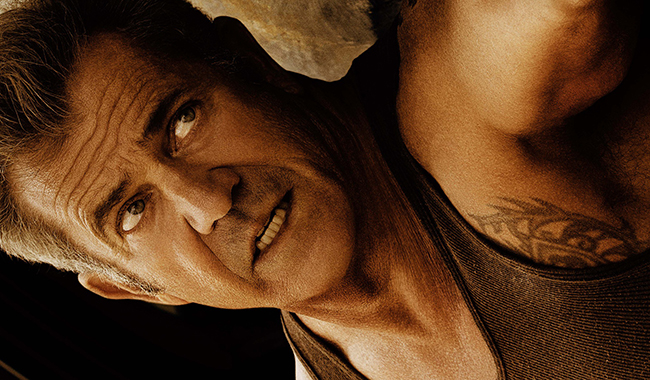 Blood Father is one of those films that will make critics say something to the effect of “Mel Gibson is back!” or “Gibson puts in his strongest performance since…” or “A career best performance”  … You get the idea.

First of all, Gibson was never gone. And secondly, he rarely puts in anything substandard when it comes to his on screen performances. Blood Father is indeed a gritty and hard performance from the man. But we have seen him toy in this arena many a time, and every time he gets it right and it’s always been a high point of said film.

Mel Gibson has of late been putting a couple of Villain roles to his list of credits (Machete Kills! And The Expendables 3) and he was (again) clearly a highlight of those films.  So it isn’t going to be a shock to the fans that he’s the best thing in Blood Father.

Gibson plays an ex-con and recovering alcoholic whose runaway daughter, Lydia, shows up back in his life in need of help. She has become a drug addict and has been living under the wing of a small time gang, the leader of which (her boyfriend) she has just shot. And now retaliation seems to be on the cards as not long after she has stopped by dad’s trailer has a car full of gun-toting hoods shown up to wipe her of the face of the earth.

With his own parole now in violation he takes his daughter and hits the road with her – gun-toting maniacs on the prowl after them.

So father and daughter get to spend a bit of quality time together reliving their past and making as many possible amends as they can before the chaos erupts around them again.

William H Macy makes yet another affable supporting player as Gibson’s neighbour and sponsor. Michael Parks also gets to eat up some screen time as the man Gibson took his prison fall for. And in one chilling scene, he berates Lydia and the lifestyle she thinks she is leading compared to the one he used to exist in. It’s a real wake up moment for the daughter and clearly the scene in the film that Parks was probably anxious to play: A real actor’s moment.

But as stated, Gibson steals every second of screen time he gets away from anyone. Where trying to keep his life quiet, or watching his contempt and nerves start to boil over, to the full on rage explosions he has throughout the film. There is so much subtlety put into his performance that it doesn’t fail to impress of sustain dramatic tension. And at 60 now (and at his most muscular to date) it’s quite the feat.

Blood Father is a short (88 minutes) and compelling thriller, fully driven by a ferocious performance from Mel Gibson. And the funny thing about that is that you know that given the opportunity he probably could have pushed even harder. Compulsory viewing!