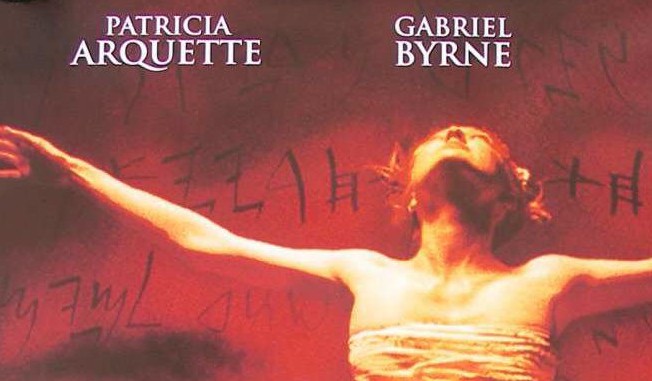 Released by Eureka! Stigmata (1999) is one of many religious possession films released in the 1990s and noughties. They are usually set in contemporary America in which an ordinary person becomes possessed by something from an ancient, medieval or biblical text. Think of The Ninth Gate (1999) with Johnny Depp, The Order (2003) (also known as The Sin Eater) with Heath Ledger or The Exorcism of Emily Rose (2005) and the hundreds of other demonic possession films that followed on the backs of Rosemary’s Baby (1968), The Exorcist (1973) and The Omen (1976). I don’t usually like to make too many tenuous comparisons, but in this case I will. It does feel like an uneasy blend of The Exorcist and The Omen with plenty of Dan Brown thrown in with a disjointed blending of contemporary styles of music with the more traditional possession monastic music more familiar with the likes of The Omen. In fact Stigmata opens in a very similar fashion and style to The Omen.

The opening shots are set in a small village in Catholic Brazil in which a Jesuit priest and science investigator, Father Andrew Kiernan (Gabriel Byrne) has been sent by the Vatican to investigate a statue of the Virgin Mary in which the statue appears to be bleeding from the eyes. The priest who ran the church has also died and was said to have suffered ‘stigmata’ wounds which have miraculously appeared on the wrists simulating those of Christ when he was nailed to the cross. Meanwhile in Pittsburgh USA, a young beautician called Frankie Paige (Patricia Arquette) suffers a violent affliction while in the bath in which stigmata wounds appear on her wrists. Taken to hospital, staff there believe that she has tried to commit suicide. A while later she suffers terrifying visions and further attacks including whip lacerations on her back while travelling the subway as well as cuts to the head, simulating the wounds to Christ with the crown of thorns while on the cross. Father Kiernan is sent to also investigate this case by a Vatican Cardinal (Jonathan Pryce) who is of course motivated to defend the Catholic faith. Kiernan makes contact with Frankie and tells him that she is an atheist. He educates her on the history of stigmatas and religious iconography, in the process dispelling the myth from most iconographic Christian imagery that the nails were placed through the wrists rather than the hands. The priest and Frankie become close as she begins to show stronger signs of being possessed by an internal force and suffers further wounds. However, when the Cardinal learns that while possessed she is able to speak and write in Aramaic (the ancient language Jesus is said to have spoken), the words are reportedly the word and gospel of Christ himself which, it is said, could bring down the Catholic Church he takes matters into his own hands.

Stigmata feels as though it is a confused film as to the direction it wants to go. On the one hand it tries to be a piece of Dan Brown type of Omen storytelling, on the other it tries to be a modern upbeat film appealing to a slightly younger 20 something audience. Falling between two stools doesn’t really work. Thankfully when viewing the alternate ending available on the extras, the other ending was not used. This would have made the conclusion too sentimental and crass. As it is, both versions only go to highlight how the Christian symbolism is over egged and nowhere near as subtle or clever as Dan Brown had made it in his seminal books. Arquette and Byrne are both well cast, with Byrne typically brooding and being given free rein as an Irish priest. His character is something of a fallen angel itself as he has doubts despite the courage of his convictions and admits that he hasn’t prayed for years, while still almost being tempted by the flesh.

The background to the story is the reports of real-life stigmatas appearing to the devout that have been recorded on film. The background to this is covered both in the film and in more detail on a Making Of documentary among the extras on the disc. The other aspect covered is the myth of the Gospels of Jesus, allegedly written in Aramaic, the language spoken by the people of Nazareth. The existence of these scrolls is denied by the Catholic Church as this would damage the underpinnings of the Catholic faith and therefore much of this film draws the plot into Dan Brown type conspiracy theories. It feels like there is a good film in there but has not been given shape by British director Rupert Wainwright. After all the guy had also directed such NWA videos as ‘Straight Outta Compton’ which explains the strong music element to the film.