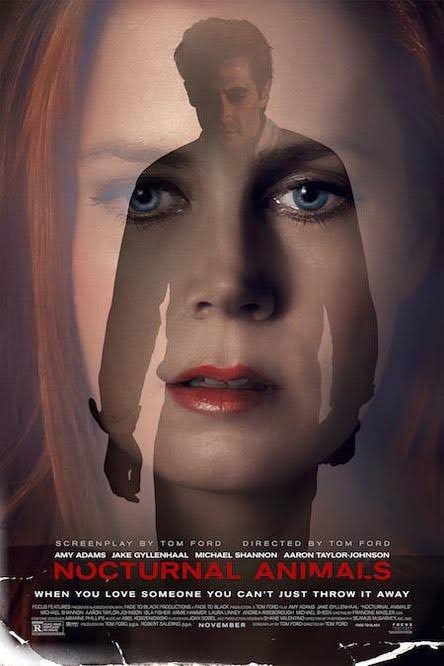 Tom Ford returns to the filmmaking world with his deeply dark, noir thriller about betrayal and revenge on an emotional level. Twin narratives run simultaneously, one of Amy Adams’ Susan, a successful art dealer in an emotionless marriage. Out of the blue, she receives the manuscript of a new novel from her ex-husband, which has been dedicated to her.

The mirrored narrative is that of the novel which Tony (Jake Gyllenhaal) has written, a piece of fiction set in their home state of Texas. While Tony has always been described as sensitive and, at times, weak, the material of his novel could not be more further from this. It is harrowing, destructive and a tough read for Susan. This was evident from the offset, it’s title being that of a nickname Tony once had for his light sleeping ex wife.

Ford dramatizes the events of the novel in front of us, as Susan imagines Tony as Edward, alongside characters such as Ray Marcus and Detective Bobby Andes, brilliantly portrayed by Michael Shannon. The guts of the film take place in this fictional tale, while through it we continue to learn of Susan and Tony’s relationship, and how it spiralled dangerously to the issues that caused it to crumble.

The contrast between the uber rich and luxurious style of the LA art scene, and the west Texas desert is jarring and Ford nails the tone here; it is both brilliantly devastating, and devastatingly brilliant. The Texan story gets tough to watch, just as Susan’s reactions to the words written in front of her. Amy Adam’s really turns up here, one of her best performances in some time.

That said, it’s hard to shy away from Gyllenhaal, who gives the performance of his career. He has been on a steady rise of late, with films like Nightcrawler and Prisoner showcasing that the young man we met in Donnie Darko is still a hot prospect. Much of his time on screen is as Edward, but when we see the weak, sensitive Tony, there are layers that prove one of his lines to be true; to the affect that novelists “only write about themselves”.

When you take this into account, you feel that the manuscript Nocturnal Animals could be seen as a thinly veiled threat to Susan, adding more intrigue to their history and just how these young college sweethearts, who were each other’s “first crush”, fell from grace.

Shannon’s Detective Andes is a man on a mission, while Taylor-Johnson’s Marcus is erratic, dangerous, and a perfect villain. Though he is only one villain of the piece, as nearly all the characters here are villains in their own right. Susan for reason we learn over the course of the picture, Tony for his novel which is thrust onto Susan to shake up her superficially perfect life.

There is also Susan’s current husband, Walker (Armie Hammer) who is distant and deeply unloving to his wife, who ultimately doesn’t like him. Even Detective Andes has a darkness to him. There is seemingly a never ending list of deplorable characters in Nocturnal Animals, and Ford does a great job in telling their story.

Indeed, his management of the intertwining stories, the loud imagery, the flashbacks and the project as a whole is testament to why audiences got excited at the announcement of this picture. This stylish, increasingly beautiful tale is something special, one of the best films we’ve been lucky enough to witness this year. A huge step up from A Single Man, it would be interesting to see what would become if Ford decided to focus on filmmaking.

Alas, quality over quantity should always be the case, and if that means another 6 year wait until the next Tom Ford film, then it will be completely worth it.