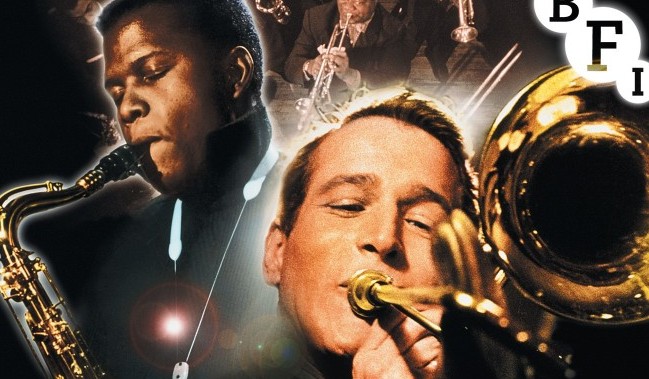 For Black History Month, a celebration of black history that takes places every October in Britain, Canada and the USA, the BFI’s contribution is their season ‘Black Star’, a presentation of screenings, TV presentations and DVD/Blu-ray releases of films showcasing black talent. Some of these are more contemporary films, shows and performances and others are classics including films highlighting the talents of such established names as Sidney Poitier and Harry Belafonte. Given the age that Paris Blues was made (1961), the race issues presented in the film are not without being problematic. As Nicolas Pillai highlights in the disc’s accompanying essay, in the original source novel by Michael Flender there was more of a focus on Poitier’s character of Eddie Cook, who was really the protagonist of the novel. Here he is second fiddle to the moody Ram Bowen played by Paul Newman. Yet this film is far from being colour blind and issues surrounding blackness have many key moments as well as a few controversial ones.

Shot in moody black and white by Christian Matras, it perfectly captures the smokey cellar bars playing jazz and the nocturnal narrow cobbled streets resembling the wonderful photographs of Brassaї and Doisneau that captured the romance of Paris streets. The camera enters one of these smokey jazz bars, Club 33 where trombonist Bowen is sharing a stage with pianist Eddie Cook and the rest of the band, including their guitarist, Gypsy (Serge Reggiani) (resembling Django Reinhardt). Both Bowen and Cook are American ex-pats, refugees from their past if you like. Bowen is attempting to write his magnum opus jazz piece and relies on support from Eddie, but feels that he is at an artistic block and having doubts. The next day he arrives at Gare du Nord station to meet a famous jazz trumpeter from the USA, the much feted Wild Man Moore (Louis Armstrong, playing a role that seems to resemble the famous musician himself). Fans have gathered at the station when Ram begins talking to a black American woman tourist called Connie (Diahann Carroll) who has arrived with her friend, Lillian (Newman’s real-life wife Joanna Woodward). Initially the idea was for their to be a inter-racial relationship in the plot. This was seen as a plot device too far for United Artists in pre-Civil Rights America much to the chagrin of the films jazz composer Duke Ellington. Lillian is persistent and finds Ram playing at Club 33. Ram initially tries to deter the tourist of pursuing anything with her. He relents, with both Eddie and Ram now dating the two American tourists. As the relationships develop both women try to convince the men to go back to the US with them. Ram does not want to give up his freedom or join the grind of pursuing the ‘American Dream’ in middle-class Mid West small town America and would rather live in his small Montmatre apartment and play jazz clubs. The same is also true for Eddie. Connie is very politically aware of black politics in America and accuses Eddie of running away. He looks at it differently; he says that in Paris, he is “Eddie Cook, musician, not Eddie Cook, black musician”. On this they vehemently disagree.
But this film is not just about black politics, but it is also about Paris and is very much a non-glossy travelogue for the city that helps build a mythology around the jazz craze and French sophistication. Jazz was enjoying an equally enjoyable revival in the USA as well as in Britain (although it was more Trad Jazz in the UK). Much of it is shot on location and takes great care to ensure that much of the city is well utilised. But this is not the Paris that focuses on the usual tourist attractions. Although the sites are visible, Matras’s camera prefers to show the streets and the River Seine, as well as other perhaps less famous sites such as the the early morning central market of Les Halles, Parc des Buttes-Chaumont or the Rue Lepic brick-a-brac market.
This was one of five films that director Martin Ritt made with Newman and he has taken particular delight in portraying the smokey jazz club including one key jam scene in which Armstrong’s Wild Man Moore jams with the other musicians capturing the energy of ‘Satchmo’s’ live performances. Another is the fantastic re-working of ‘Mood Indigo’. As previously mentioned, one of the musician’s in the band is called Gypsy; he is either a Romanian or Spanish gypsy. He is also a heroin addict who Ram tries to manage. When he is cold turkey he can’t play, once he has a fix he is able. In one scene Ram is walking with a recently fixed Gypsy through a flea market when he recognises a man who was once a well known flamenco guitarist, now addled by drugs. “That’ll be you in a year” Ram informs Gypsy.
Paris Blues may have plenty of cliches, but they are all well done: smokey clubs, bedsit living, drug addiction and free love. It relishes its cliches without a hint of irony. But it is also solid drama with serious issues including race and drug addiction and it wears this drama on its sleeve. It did receive much criticism from serious jazz aficionados. Even Duke Ellington and Poitier were critical of the film and it would be fair to say that some of the race issues addressed in the film could be regarded as divisive. A good choice for release by BFI that can at the very least be a starting point for discussion. There are only minimal extras on the disc, but the image is very clear.
Chris Hick