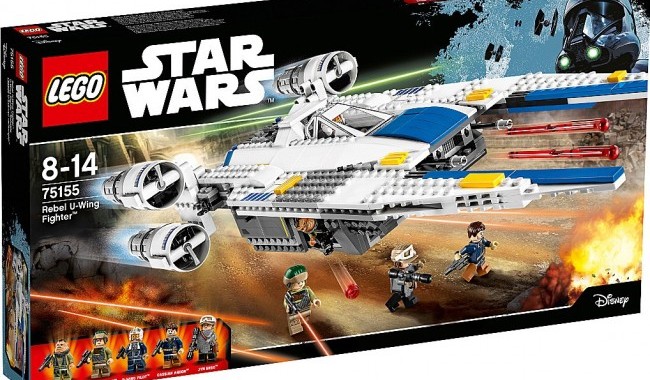 The U-Wing is a new ship created for the Rogue One film and appears to be more of a transport/gun ship than a fighter indicated by the Lego name. The ship is well featured in the trailers for the film, so we have a pretty good understanding what it looks like and based on that information at least, Lego have done a good job in capturing its look.

For minifigures the Rebel U-Wing Fighter set is probably the most important of the Rogue One sets released so far as it is the only set to have Jyn Erso, the lead character of the film.

The Jyn Erso minifigure looks pretty faithful to the look seen in the trailers although this does make it fairly plain. She has a gray torso with printed details, but these all get covered by the gray, soft fabric poncho. The poncho is nicely held in place by a satchel. The legs are plain black which is a little shame as some printing would have given the figure some detail to really make it stand out. She does get a brand new hat with a moulded ear piece and goggles on the top which is a nice add on.

Cassian Andor figure is much better detailed and probably the best of the figures in the set.  He has a blue detailed long jacket that is printed down to the leg piece. The details include the usual utility belt, a furred collar as well as some binoculars that are nicely printed across the torso and legs. His hair piece is pretty small and while it looks very good, it does curiously leave some of his beard on the double sided head piece visible in his neck.

Bistan is the alien rebel reportedly from planet Iakaru. He has a slightly ape looking head which has been  moulded in great detail as usual for these unique heads that Lego has become very good at producing. Bistan also has printing across the torso and legs, featuring mainly various straps across his uniform green flight suit.

Finally we get two unnamed rebel soldiers as support figures to the set. The first is the U-Wing pilot wearing a blue, fully printed flight suit. He has a traditional looking Rebel flight helmet except for the markings which look unique and have been printed in great detail. I also really like the printing of the visor into the head piece which gives a very nice, complete look for the helmet.

The second is a regular rebel trooper with an olive green and brown suit. Again we get printing on both torso and legs which mainly features ammo clips for his blaster rifle. He also gets a brand new helmet which seems to be a variation of the sort of helmets the rebels were wearing in Episode IV which is a nice touch.

The build of the U-Wing or UT-60D ship is perhaps surprisingly fun. The ship features four large external engines, a large troop carrying hold underneath as well as very large wings which sweep to either a frontal position or to the rear for a more conventional looking wing arrangement. The wings lock into place in both positions making the set up sturdy that never feels flimsy and in danger of breaking off.

The ship features a lot of interesting details. One of the most notable is the cockpit with a conventional view, but also a lower window allowing the pilot the kind of landing view that a troop transport requires. The design of the spring loaded missile system is also probably the best I’ve seen so far. The missiles themselves are nicely hidden in the nose of the ship therefore not ruining the aesthetic of the model. The fire mechanism is operated from the top of the nose with two very well hidden buttons. Lego have really taken a massive leap in the design of their play features and designing them in such a way as to keep them unassuming but functional that suits all audiences.

The troop compartment is probably the weakest side of the design. It is a little fat in design comparing to the real ship though this is not a big deal as it is mostly hidden underneath the wings. However, it also has very bad access to be used as a play feature. While both of the sides of the compartment open, access is blocked by the cannons and while there also is a rear ramp, this entrance is completely blocked by structural features. So while there is enough space to fit the crew in there, you would struggle to place them in anything other than a big heap.

Perhaps the most striking thing about the Rebel U-Wing Fighter is the sheer size of the ship for the piece count. The wings really make the ship look bigger than it is and therefore a very impressive set overall.

The minifigures are a big draw to the set and in usual style look excellent. Jyn Erso, being the most important figure of the film is perhaps the only slight disappointment. Overall the figure still looks great, but I would have loved to see some printing in either the legs or perhaps the arms just to give it some special attention.

It remains to be seen how integral the U-Wing fighter is to the Rogue One film, but certainly Lego have continued to produce great sets based on limited amount of information ahead of the release. With the now annual release of Star Wars films going forward from Disney, I’m sure we again have a lot of great Star Wars Lego to look forwards to.