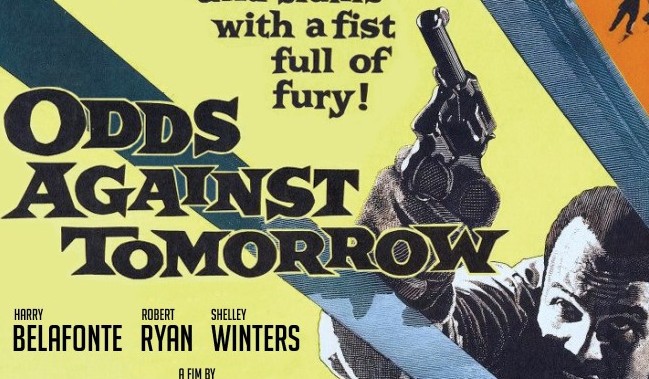 BFI’s new release to celebrate their ‘Black Star’ season during Black History Month is the 1959 film, Odds Against Tomorrow. The other film BFI released this week was Paris Blues (1961). Although made at roughly the same time and each with a leading black actor, this film is very different in tone, if not style. Whereas Paris Blues has Sidney Poitier as a refugee from racist America and feeling freer in Paris as a jazz musician (ignoring the racial tensions with North Africans and other Algerians at the time in France of course), in Odds Against Tomorrow, Harry Belafonte is a middle-class black man in New York on the sharp end of at least one individual’s racist taunts. This films question of race is more open and gets under the skin of American culture.

The plot is not a complex one. A retired and disgraced police officer, David Burke (Ed Begley in probably one of his best roles) gathers together two men: Johnnie Ingram (Belafonte), a middle-class black man who has becomes separated from his wife and daughter due to his gambling addiction. He is also facing pressure from gangsters to pay up his debt. The other member of the gang, Earl Slater (Robert Ryan) is an ex-con down on his luck. Slater lives with his girlfriend Lorry (Shelley Winters). He is bitter that life is passing him by and begrudges being financially supported by his waitress girlfriend. He is also a racist with a bad temper and does not feel comfortable at doing the job with a black man.

Odds Against Tomorrow is a what can be termed a late film noir. Orson Welles’ Touch of Evil made the year before is usually regarded as one of the last of what we now term film noirs. It is shot in gritty style on the streets of New York, a favoured location for film noirs by the 1950s where location shooting and the urban feel of the city was central to the film. Think of early police procedure noirs such as The Naked City (1947), Edge of the City (1957), Panic in the Streets (1951) or Where the Sidewalk Ends (1950) where the city is integral to the films. Odds Against Tomorrow was shot by a little known French cinematographer, Joseph C. Brun (he had also filmed Edge of the City) he used infa-red film which means that even a blue sky would appear overcast, giving a November feel to the film. This is best played out in when Belafonte’s character is in Central Park taking his daughter out for the day but is distracted and calling people to try and clear his gambling debt.

The heist itself is simple and does not dominate too much of the film. It is not interested in the mechanics or details of the heist when one thinks of such classics as Stanley Kubrick’s The Killing (1956). In that film each detail is accounted for with the POV for each of the gang members. Odds Against Tomorrow is purely interested in the social slant and how the character of Slater in particular marks the downfall of each of the three men allowing prejudice to get the better of him.

Ryan is superb as the racist. He is a complex character that is built throughout the film. We soon establish that he is an old fashion man’s man who does not feel right that he is being carried financially by his girlfriend and, as already mentioned he angrily begrudges working with a black man bringing out any number of Uncle Tom cliches. We understand that he is an ex-vet, not made clear whether its from World War Two or the Korean War. In one scene Slater is sitting in a bar alone and minding his own business. Further down the bar is a young soldier brashly joking with two women about combat. Knocking in to Slater, this leads to a fight as the soldier accuses Slater of being an old man.

The film has a steady hand under Robert Wise’s direction, a director that has made many great films in all sorts of genre from horror to science-fiction, from musicals (he received Oscars for West Side Story, 1961 and The Sound of Music, 1965) to thrillers. Many it is this broad cross-genre working that has meant Wise has not been received the recognition as a director he might otherwise have been if he had focused on one area. The disc is, as with most BFI releases a complete package with more contextual extras than on Paris Blues. There is a good oral essay by Adrian Wooton, as well as recorded interviews with Robert Wise and one of Robert Ryan recorded in 1969. There is also a post screening interview and Q & A of Odds Against Tomorrow with Harry Belafonte.