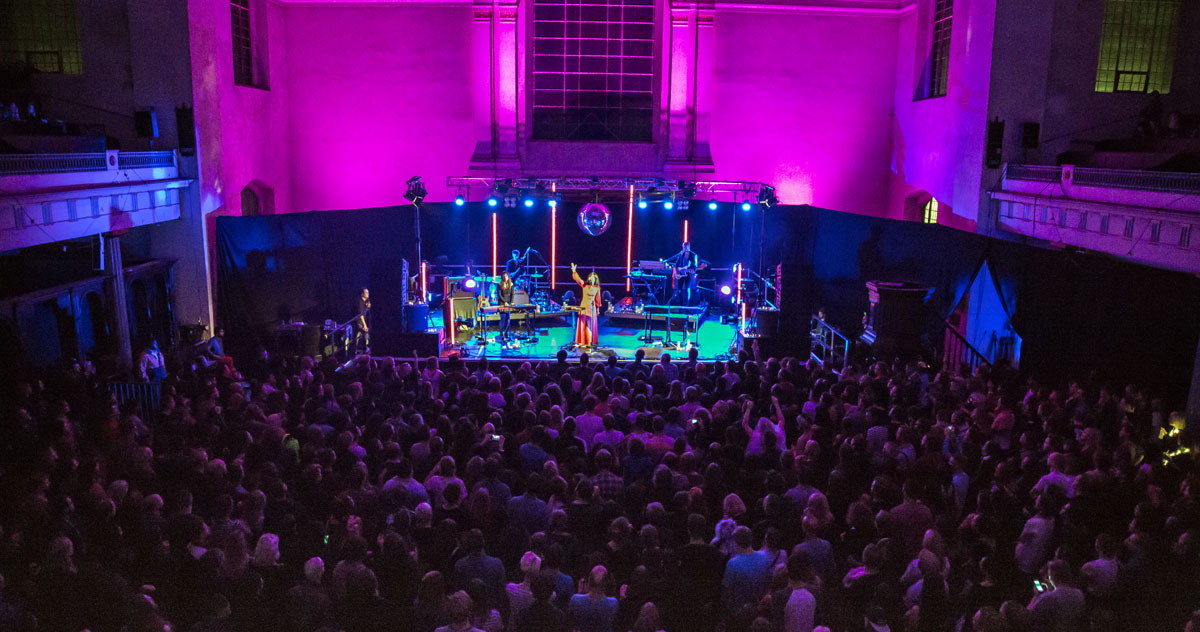 Mirror, mirror, on the wall. Who’s the fairest of them all? It’s MIRRORS festival, of course, proving once again that the festivities of live music need not be confined to the longer days or warmer months.

Set across a handful of stages in the heartlands of Hackney, it reaps the eternal benefit that metropolitan festivals have: enjoyment can be found, come rain, hail or shine. And for a fortunate bunch on an unseasonably mild autumn’s evening, a shitload of enjoyment was had.

The day begins with Babeheaven playing at the Oslo. Nancy Andersen’s voice is no doubt gorgeous, having the dual qualities of being both haunting yet delicate. Yet as a live band, something seems lacking. Perhaps it’s the liberal use of the smoke machine creating a fogged disconnect from the crowd. Or perhaps it’s the static pace of all things ambient, ethereal and dreamy merging into one. Or perhaps it’s the difficulties of translating what is often enjoyed as bedroom chill music, live. Because despite it being very easy on the ears, the overall impression is slightly underwhelming.

The pace picks up with Brighton five-piece MarthaGunn over at Stage 3. Dressed liked folk troubadours, the band play what can only be described as contemporary-folk-pop-rock. Think foot stomping, finger snapping, tambourine waving joviality, against the backdrop of speeding percussion and the draw of powerful vocals. It’s an energetic effort, and a shout out must be had for the drummer, whose ‘drum face’ is the most entertaining drum face we’ve witnessed for years. Not quite gurning, not quite sex – but a concentrated union of the two.

Back at the Olso, it’s Cherry Glazerr who play a raucous set of catchy, fuzzy, garage fun. The band perform an angsty rendition of their hit, ‘Had Ten Dollaz’, which goes down well with the crowd, as do other hits such as ‘Told You I’d Be With The Guys’ and ‘Grilled Cheese’. There’s plenty of high pitched aggression from Clementine Creevy’s vocals, which which adds to the charismatic fuck-off attitude of the whole show.

Next up are the ever-so-gorgeous Allah-Las. Their lush vintage melodies match the ramshackled vibes of St John’s at Hackney Church perfectly, as they fill the large venue with their sun-drenched warmth. It’s music that makes you temporarily forget where you are, with the international flavour of London adding to this. Behind me are a group of Spanish girls, dancing and singing along with every word. In front of me are a pair of American blokes, nodding in agreement throughout the set. The audience embrace every track, with both new and old releases being happily lapped up. On record, the band elicit feelings of 60s styled chillax. Live, this feeling is amplified, with their subtle vintage look and their hella vintage equipment creating the most unforgettable psych vibes.

Punks do love to get sweaty, for next up are the much-loved Fucked Up, performing to a never-ending mosh pit. The Toronto band perform their ten year old debut album, Hidden World, in full, and the crowd head bang to every moment of it. And while the logistics of playing a 74 minute album within an hour’s slot seem difficult, they manage to pull it off. There’s obviously limited time for casual crowd chitchat, but frontman Damian Abraham is constantly in people’s face, getting the crowd going by shoving microphones into their faces, and walking up and down the pit.

We manage to catch the second half of Bat for Lashes, which is a bit of a contrast on the eyes and ears. With her concept album, The Bride, based on a woman’s wedding day, Hackney Church is a fitting backdrop. Natasha Khan owns the stage in a bright 70s dress, and her recognisably beautiful voice transcends the room. She plays her early classics, including ‘Laura’ and ‘Daniel’, and towards the end of the set, tosses a bouquet of flowers into the crowd.

MIRRORS is a small festival, but perfectly so. Of course, there were some minor issues – including the slow bar at St John’s, and the impossibly stationary queue to get into see The Parrots at Moth Club. But hey, it’s only in its second year. For such a young event, the bands, venues and logistics seem to work fine. MIRRORS manages to fill that post-summer festival hole that everyone craves. And in a time when many major festivals are being criticised for their male-centric line-ups, it’s refreshing to have a festival that is so female-led.

After this reflection, we’re eager to see what next year holds.