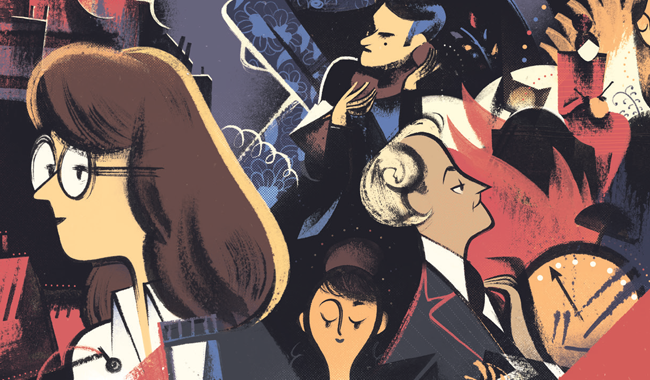 The film opens with a man coming out of a subway station. He walks through the throng of people, goes up to a man and slaps him. “Cut” shouts the director who barks for another take. And again. The camera pans back to show all is artifice – the whole street is a set while the two actors (well known French actors Jean-Pierre Léaud and Jean-Pierre Aumont) practice the slap between takes. The director, Ferrand (played by films real life director and this films director, François Truffaut) tries to keep the whole band of cast and crew together while making the film. Meanwhile, behind the scenes the producers are trying to get financial backing and Ferrand has to listen to all the cast and crew’s whines, moans and problems. The film they are shooting is a melodrama called ‘Je Vous Présente Paméla’ (Meet Pamela) – and therefore of course plays out as a film within a film. The story of Meet Pamela is about a British woman who has an affair with her husband’s father – a plot that could very well have come from a Truffaut film when we think of such classics as Jules et Jim (1961) and La Peau Douce (Silken Skin) (1964). The lead actress in the film is a diva at the end of her career, Séverine (Valentina Cortese), supported by the other two actors we have met, the other veteran actor, Alexandre (Aumont) and the younger Alphonse (Léaud). Ferrand also brings to the film British actress, Julie Baker (Jacqueline Bisset) who has recently recovered from a nervous breakdown and a scandal back home and tries to recover (and escape) in a European film. In between the days of filming the cast and crew share their problems while the producers try to deal with the stresses of the business side.
Truffaut, often cited as the original auteur and father of French New Wave Cinema (along with Jean-Luc Godard) brings his passion of cinema to this film-within-a-film. In his early career Truffaut was a writer and critic for Cahiers du cinéma (the French equivalent to Sight & Sound) and was a theoretical champion in his writings on Alfred Hitchcock before becoming a director and making the classic 400 Cents Coup (The 400 Blows) in 1959 (also starring a young Léaud). In the film he makes many references to his love of cinema with shots of books on the likes of Howard Hawks, Ingmar Bergman, Carl Dreyer, Luis Buñuel, Godard and Robert Bresson among others. Made in 1973 and titled in English as Day for Night; the original French title of the film is La Nuit américain. These titles have the same meaning, the French title being the word French filmmakers use for using filters over cameras and giving the impression of a night shot. The French word for ‘night’ is ‘nuit’ and could sound like ennui meaning boredom but the word American also pays homage to American cinema.
While this may not necessarily be Truffaut’s most entertaining film it is arguably his most intelligent, although did lead to a fall out with his former friend Godard. The crew of Day for Night are also the crew of ‘Meet Pamela’, again morphing the differences between reality and the artifice of cinema. Ferrand makes it clear that while he is the gentle father figure of the film and, dare I say it artist, is also obsessed by cinema and that cinema is his life. This is also true of Truffaut such as the aforementioned scene where he receives the books of the great film directors. In addition there is also the three times seen dream sequence (shot in black and white) depicting a boy walking down the street and only in the final dream sequence do we see the end of the dream where we see the boy barred by a gate from entering a closed cinema but he steals the promo stills for Citizen Kane, thereby again bringing about the birth of Ferrand (Truffaut’s) obsession. This is, as is probably already clear Truffaut’s most personal film and though while it may not be original to focus on the process of people making a film it is one of the most intelligently made.
The new 2K restored Criterion release of Day for Night is packed with extras putting the film into context and highlighting the process and breaking down the film. There is no extraneous material here and all is important material to understanding the film. There is a superb visual essay of the film by the filmmaker, ::Kogonada, a 2003 documentary by scholar Annette Insdorf, a short contemporary film about the making of the film. Another interesting documentary is the one by Dudley Andrew that charts the fall out between Truffaut and Godard. Between the early 1950s-1968 Godard and Truffaut had been contemporaries and friends. The events following May ’68 changed that and when Truffaut made Day for Night. Godard wrote letters criticising Truffaut’s film and its lack of politics and his looking at cinema as a magic process. Truffaut of course responded ending their relationship.
Chris Hick