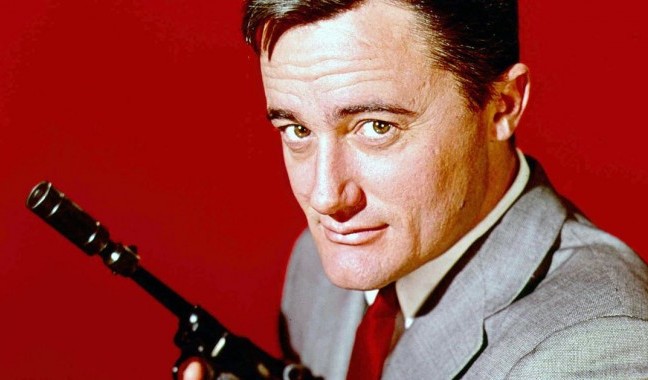 As if it wasn’t bad enough that Leonard Cohen had passed away on Friday 11th November, later in the day news reports also came through of the passing of Robert Vaughn, most famous for his role as Napoleon Solo in ‘The Man From UNCLE’ films and TV series. Unfortunately for Vaughn he found it difficult to break away from the role and was always referenced back to it, never really able to fulfill his real potential as an actor.

Robert Francis Vaughn died just shy by 11 days of his 84th birthday. He was born in New York on 22nd November 1932 to two acting parents, his mother from the stage and his father from radio. His upbringing was troubled as he had to hear his parent’s constant fighting and bickering leading to their eventual divorce. Robert was then moved to Minneapolis where he went to live with his grandparents while his parents, now divorced continued to pursue their acting career. He eventually went to university in Los Angeles where he studied the craft of acting and renewed his relationship his mother. He was later to earn a PhD., writing his thesis on the blacklisted actors under McCarthyism which he gained in 1970.

In the mid-1950s Vaughn appeared in several TV shows and had bit parts in movies including B movies. His first significant role was in the drama The Young Philadelphians (1959) in which he played opposite Paul Newman and was to earn an Academy Award Nomination for Best Supporting Actor. This performance directly led to him coming to the attention of director John Sturges and one of his most important early roles in the blockbusting western The Magnificent Seven where he acted alongside Yul Brynner, James Coburn and Steve McQueen.

Robert continued to act on TV. Back in those days and until relatively recently TV stars were TV stars and movie stars were movie stars. Vaughn was able to cross that bridge fairly successfully. It was in 1964 that he was offered the lead role in ‘The Man From UNCLE’, an almost spoofy James Bond type TV series in which he played UNCLE agent Napoleon Solo and was complimented by the cool blonde haired Scottish actor, David McCallum as Illya Kuryakin and the ‘M’ type boss in New York, Leo G. Carroll’s Mr. Waverley. The series was not a success in its first season but would go on to become a very popular show that ran until 1968 and still has many fans and even a remake for the big screen in 2015 with Henry Cavill playing Vaughn’s character. As well as in the TV show Vaughn would play Napoleon Solo in no fewer than 9 films. Today, however, there is still a kitsch interest in The Man From UNCLE but they do look very cheap with obvious wobbly sets, hammy acting and obvious Californian locations doubling for France or Switzerland.

After The Man From UNCLE franchise ended in 1968, Vaughn went immediately into another key role as the ambitious DA in the popular film Bullitt once again playing alongside Steve McQueen earning him plaudits in one of McQueen’s best loved films. However, breaking away from the role of Napoleon Solo was not easy. He always wanted to be taken seriously as an actor and was not getting the parts that he wanted. In the war film, The Bridge at Remagen (1969) audiences found it hard to accept Napoleon Solo as a German officer in the Second World War. He wanted to pursue more Shakespearian roles and was given the part as Servilius Casca in the all-star Julius Caesar(1970), but this film was not a critical success. Arguably one of his best roles in the 1970s came with The Towering Inferno (1974) where he played (again with Newman and McQueen) a Senator, one of the doomed guests on the opening night of a new skyscraper.

It was on TV that Robert Vaughn continued to gain growing success, winning an Emmy as the Machiavellian political hatchet man in ‘Washington: Behind Closed Doors’ in 1977. Elsewhere on TV he would appear as a guest on many shows including ‘The A-Team’, ‘Hawaii Five-O’ and even returned as Napoleon Solo in a ‘The Return of the Man From UNCLE’ in 1983. In later life he appeared in episodes of ‘Law and Order’ and for 8 years as Albert Stoller in the British crime drama ‘Hustle’ as well as appearances in ‘Coronation Street’ in 2012! He considered the UK his second home and spent much time here, particularly in the latter stages of his life and career.

What is often forgotten about Robert Vaughn is how politically active he was. He was a very outspoken critic of Lyndon B. Johnson’s Vietnam War Policy and, as already mentioned was a critic of McCarthyism and blacklisting. He was also a friend of and worked with Robert F. Kennedy. Vaughn was devastated by the younger Kennedy’s assassination in 1968, coming only shortly after the assassination of Martin Luther King. All the more sad therefore, that the world sees the passing of Robert Vaughn at a time when his voice of reason is needed.