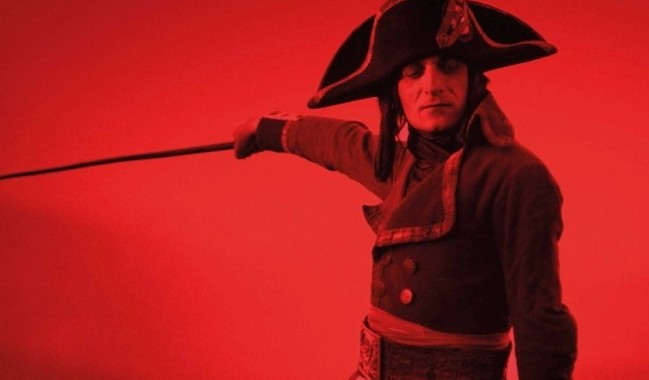 For the French Napoleon Bonaparte, seen by the British among other European nations as something of a conqueror and even a war monger, is for the French still perceived as a hero figure and the father of modern France. His star shone at a time when France needed someone most following the Reign of Terror that followed the bloody French Revolution and the end of monarchy. His tomb is in Les Invalides, Paris where he is buried in a classical tomb that can be viewed from above in the round with his famous hat and coat hung nearby in a display case. Abel Gance’s epic 1927 film Napoleon also portrays Napoleon as the Romantic hero and saviour of France, as heroic as David’s painting of ‘Napoleon Crossing the Alps’. The film begins with the young Corsican’s childhood at Brienne College with the young Bonaparte already forming himself as a leader of men in a snowball fight. Other symbols are also formed including a shot of teen Napoleon lying on a canon when his pet eagle, the coming symbol of Napoleonic Imperial France swoops down and perches itself on the canon (while the future Emperor is seen sentimentally smiling through his tears). The film then jumps to 1792 and the rule of the mob during the French Revolution with Danton leading that Revolution, Marat murdered in his bath and Robespierre (played by dramatist and poet Antonin Artaud) begins his dictatorial control. During this melee Napoleon, an officer in the army makes his way to Corsica to see his family. When Corsica’s President plans to give Corsica to the British, Napoleon is hounded out of the country and narrowly escapes with his life and escapes on a small boat, using a large French flag as a sail. Over the following years the little Corsican rises in stature in the army as he bravely defeats France’s enemies such as those who wish to conspire against France at the Siege of Toulon. He is not without his domestic enemies too, however, such as Saliceti whom Napoleon narrowly escapes from with his life and is forced into a life of imprisonment and poverty. Meanwhile, Saint-Just (played by Gance himself) and Robespierre are beheading with abandon during the Reign of Terror and through a shear act of fate he escapes the guillotine. Soon Bonaparte regains control and respect in the army becoming a general and marries Josephine de Beauharnais. The film ends with him inspiring the troops in the Piedmont region of Italy in his first successful campaign and putting him on the road of France’s saviour.

This film was originally intended to be the first of 6 films Gance would make on the life of Napoleon Bonaparte, but he was beset by financial troubles in getting this film made at all. As with such contemporary films as F.W. Murnau’s Sunrise (also 1927) and the earlier films of Sergei Eisenstein, this film represents the height of what is possible by film as art during the silent period and the advancements that could be made with cinema – during the silent era at any rate. Gance would be put off from pursuing this adventure with the coming of sound later that year, restricting the control of the filmmaker with new unwieldy equipment. Already during the making Gance was beset by such problems as his German financial backer dying and his Russian one pulling out leaving him with debts. Yet viewing the film is extraordinary, witnessing the inventiveness of what he was able to do with the camera and developing new filmmaking advancements as he went along: using the camera on a swinging pendulum during the Republic Convention and inter-cut with Napoleon caught in a storm at sea, hand held and body cameras and tracks for coming down staircases and surveying a scene (before Leni Riefenstahl adopted this for her pro-Nazi documentaries). This gives the film a dynamism that despite its length moves the film at a terrific pace. He had used this frenetic style of filming with fast editing and montage to great effect in his previous film, the brilliant tragedy and little seen La Roue (The Wheel) (1923). The film is epic not only in grandeur and scope but also in length. With 920 hours of footage filmed he paired it down to 5 hours (there have been many abridged versions released, but this is the nearest to Gance’s vision. Many versions were about 3 hours in length with one awful US release shorn down to 100 minutes) it may seem daunting, but Gance convinces us that its subject justifies this. The movement of the camera is not the only innovations present in the film. The final act in which Napoleon inspires the troops to fight against the odds in Italy is shown as a triptych, or more realistically in cinema terms an early example of Cinemascope as he placed three cameras side by side to give the impression of a continuous image, although is sometimes shown as a central image with each side or wing of the triptych being shown in mirror image each side. The final shot in the triptych is shown from left to right as blue, white and red panels, or the tricolore of the French flag. On the extras on the disc each panel of the triptych can be seen as isolated single films. While still impressive, much of the effect is lost on the small screen.

As can be expected the extras on the BFI release on Blu-ray are plentiful. The 2K restoration looks stunning with most of the marks, scratches and pops removed. There is a small short about that restoration and the digital clean-up of the film. Napoleon is a film that has risen phoenix like from the ashes. Since the arrival of sound Napoleon disappeared from significance until it was highly praised by the New Wave of filmmakers and critics, François Truffaut and Jean-Luc Godard. For years the film was shown in various truncated versions until years later a full 5 hour version of the film was assembled and a new important score added by composer Carl Davis. Given a re-release in 1980 following the painstaking restoration by Kevin Brownlow (proving itself to be something of a lifetime’s work) with the Carl Davis score, the profile of the film was raised further (an extra is Davis talking about how he wrote the score mindful of composers such as Beethoven and Haydn as well as inserting the Marseillaise at significant moments) and given a further restoration overseen by Brownlow in 2000 with further improvements in the version just released. As well as Paul Cuff’s commentary and 60 page booklet (written with Kevin Brownlow), there is a fascinating 1968 documentary called ‘The Charm of Dynamite’ that charts the story of this film and includes interviews with Abel Gance (he died in 1981) and Napoleon actor Albert Dieudonné, a friend of Gance’s. Once again released at the cinema as well as on DVD and Blu-ray by BFI this is a film once seen never forgotten. Napoleon was given a re-release at selected cinemas on 11th November and was released on Blu-ray and DVD by BFI on 21st November.