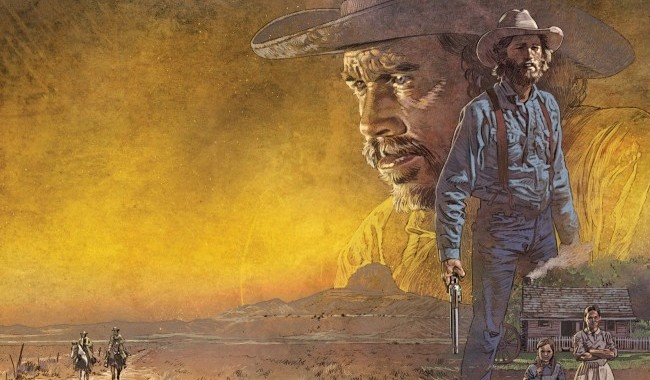 The Hired Hand (1971) is a western, but it is a very different and very gentle western to what one would expect. Made after Sam Peckinpah’s The Wild Bunch (1968) and following in the wake of Peter Fonda’s success in Easy Rider (1969) this western did not resonate with either the audience or the critics alike on its release. There is something very dreamlike about the film and as a result over the years it has gained some latent success with audiences and critics and has become a cult film over the recent years. The story is fairly simple. Three cowboys, two more experienced cowhand drifters and a young buck decide to quit the trail and return back home or travel on to California. One, Harry Collings (Fonda) plans to return to his wife whom he walked out on some 7 years previously. His partner and best friend is Arch (Warren Oates) whom he asks to go back with him. On the way back they stop at the dirt water town of Del Norte where their young travel companion is shot and killed by McVey, the creepy and sadistic pencil neck who runs the town. Harry and Arch get away but return later, surprising McVey they shoot him in both feet. Some 100 miles away they eventually arrive at Harry’s old farm where his wife (Verna Bloom) lives and works with their 8-year-old daughter. She doesn’t recognise him at first and greets him coolly, letting him know that she is not going to merely invite him back into her bed. They agree that he can work on the barn and sleep in the barn. However, the threat of him leaving and outside forces threaten his planned idyll.

Much of the criticism levelled at the film was that it was too arty or pretentious for a western. Westerns had for many years been fairly formula, from the Saturday matinees to the routine cowboy and Indian westerns being made in great numbers sincethe 1930s. Of course there were some great names in the genre like Anthony Mann and John Ford. Ford had made his own ‘arty’ westerns such as My Darling Clementine (1946), starring Fonda’s father, Henry; this was a film that the younger Fonda screened to the cast and crew of the film to give them some indication of what he was looking for. Pretentious was the accusation that a lot of critics threw at the film, mostly targetted at the slow motion work and the folksy soundtrack. Only a couple of years before Peckinpah used slow motion to highlight the action and violence in The Wild Bunch, but Fonda and cinematographer Vilmos Zsigmond used the slow motion to accentuate beauty rather than violence. The film opens a sunset scene overlooking a river and Fonda silhouetted fishing and the young Dan (Robert Pratt) running out of the river naked and stumbling. The scene is beautifully shot in slo-mo and played against Bruce Langhorne’s hypnotic folk soundtrack. There is also a look and strangeness to The Hired Hand that would also look similar to that of John Boorman’s Deliverance (1972); hardly surprising given that Zsigmond also shot that the latter film. Like Zsigmond, whose first film as a director of cinematography this film, so it was too for folk performers, this was his first soundtrack. The western had gone through some crisis or change of identity over the previous years. Audie Murphy had been one of the few making the more traditional western until Peckinpah’s had changed those conventions, already having been challenged by the so-called Spaghetti Westerns made in Europe.
Despite flashes of violence and revenge this is a much gentler film than some may have thought and marked an incredible directorial debut from Fonda. At the heart of the film is frontier life and a man wanting to reconnect with his wife. Bloom gives an outstanding performance as the Appalachian farm woman, plain looking and hard working. The look of recognition on Bloom’s face when the stranger turns up and she slowly realises that it is her long departed husband standing before her demonstrates an extraordinary piece of acting. Elsewhere there is some subtle and very smart understated acting. The film is jam packed with extras including two 2003 Sundance Film Festival extras, one including interviews with Zsigmond, Fonda, Bloom, Langhorne and production designer Lawrence G. Paull who have some great recollections of making the film including a heartfelt tribute to the late co-star Warren Oates by Bloom. The other is an introduction by Martin Scorsese. Released by Arrow Academy there is a commentary by Peter Fonda and he quite clearly shows his pride for this film. There are also many deleted scenes among several other documentaries and various trailers. The Hired Hand is definitely a western worthy of re-evaluation.
Chris Hick
Share
Tweet
Pin
0 Shares