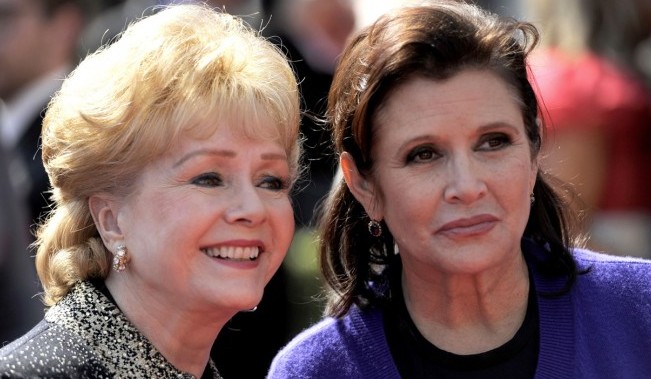 It’s not often that an obituary is written honouring two people at the same time. However, in the case of the recently deceased acting dynasty consisting of mother and daughter Debbie Reynolds and Carrie Fisher this seems appropriate. The shocking news that Carrie Fisher went into cardiac arrest on a flight from London to Los Angeles came out on 23rd December after she had been in London promoting her new book of memoirs. Over Christmas her fans were praying for her recovery until her heart finally gave out on December 27th. Debbie Reynolds’ death came not more than 24 hours after that of her daughter with initial reports suggesting a stroke as the cause. 2016 has been widely reported as a terrible year in which many beloved stars in film, television, sport and the music industries have been taken away from us. Many are even asking who is next in the last couple of days left of the year.

Born Mary Frances Reynolds 84 years ago on the 1st April 1932 in El Paso, Texas, Debbie Reynolds was the daughter of Maxine Harmon and Raymond Frances Reynolds, a carpenter who worked for Southern Pacific Railroad, both parents of Anglo-Irish descent. Reynolds was bought up in a poor and loving household. When Debbie was 7-years-old the family moved to Burbank, California in search of work. Whilst her childhood was fairly plain, she did show an interest in singing and dancing. She started as a singer before becoming an actor, releasing a couple of records and had some success before scoring her first hit in her third film appearance in the MGM musical Two Weeks with Love in 1950. She even sang a couple of her own hits in the film. This film received positive critical praise with her part securing Debbie for her famous role at just 19 years of age playing opposite Gene Kelly as Kathy Seldon in one of the greatest musical ever made, Singin’ in the Rain (1952). This one role guaranteed her launch into stardom as she hoofed alongside Kelly in such numbers as ‘All I Do is Dream of You’, ‘You Are My Lucky Star’ and ‘You Were Meant For Me’. Singin’ in the Rain is a musical about Hollywood and in particular the transition period between silent films and the Talkies when a great number of musicals of varying quality were made in the late 1920s. All the songs in the film date from this period in a brilliant parody of the flapper age.

For the next few years Debbie Reynolds would appear in several light romantic comedies and musicals before she met and began a relationship to singer and heartthrob Bobby Soxer Eddie Fisher; their relationship beginning in 1954. They married in 1955 and both became film fanzine favourites with their baby face and innocent good looks. They also acted together in a fluffy romancer, Bundle of Joy in 1956. The couple had two children, Carrie and Todd Fisher in 1956 and 1958 respectively. However, their marriage was not the model marriage that was promoted in magazines, but was beset by alcohol abuse and affairs. In 1959 they divorced following Eddie Fisher’s affair with Elizabeth Taylor whom he went on to marry (Taylor and Reynolds were also best friends at the time). Debbie Reynolds went on to marry two further times and had one more significant role as singer Molly Brown in the Titanic set musical, The Unsinkable Molly Brown in 1964 which earned her an Academy Award Nomination. She also made a number of TV appearances in such shows as ‘Golden Girls’ and ‘Will and Grace’, securing her status as something of a gay icon.

Debbie’s daughter, Carrie Fisher (born 21st October 1956) had many aspects to her career that mirrored that of her mother. At the age of 19, at the same age as when her mother was in Singin’ in the Rain, Carrie was chosen for the part of Princess Leia in Star Wars. She instantly became an iconic image with the signature white gown dress and the Germanic hair buns on the side of her head. Her character as a fantasy princess broke the mold in that she was a feisty smart mouthed princess and in many ways became a role model from the normal image of a fantasy heroine. Of course she would go on to play Leia in three Star Wars sequels, including last year’s Star Wars Episode VII: The Force Awakens. Fisher’s image as Leia, be it in white dress or the image of her in the metal bikini as a prisoner in Jabba’s lair it was shocking to hear the titters and sniggers when a distinctly older Leia first appeared in Episode VII compared to the cheers greeted by Harrison Ford’s Han Solo entry into the film. Does this say something about our attitude to older actresses, especially those who have been out of the limelight, or is this more to do with Ford’s staying power as an actor? Never the less the pressures of the role as a young woman, as well as growing up as a member of Hollywood royalty had a devastating impact on Carrie Fisher, leading her to turn to substance abuse. In recent years she has also written and discussed openly about her bi-polar disorder. Arguably more than her film career, Fisher’s honesty, plain speaking about such taboo subjects have given her a new respect as a different sort of role model. Meanwhile, her film career has always been overshadowed by her role as Princess Leia in the Star Wars franchise, but she has had a number of other worthy appearances in films but these were mostly in support roles such as in one of Woody Allen’s best films, Hannah and Her Sisters (1986), as well as a whole bunch of duds including the bizarre Rik Mayall comedy, Drop Dead Fred (1991).

The other part of her career that is less talked about is her work as a writer and script doctor. It has been revealed that she is one of the best script doctor’s in the business (who act as consultants to improve film scripts) and worked on such films as The Wedding Singer (1998). But her greatest achievement as a writer was her adaptation of her own book, Postcards From the Edge (1990). Starring Meryl Streep and Shirley MacLaine it is a very personal film about the relationship of two generations of actresses in Hollywood and their struggles with drug abuse and alcoholism, the pressures of fame and the relationship between a mother and daughter under the spotlight. The parallels with both Debbie and Carrie’s life and experiences were uncanny. Semi-autobiographical, Fisher seemed to have been graphically honest as she opened her heart in this book and film. The film received huge critical praise and two Academy Award Nominations, further highlighting the relationship between Fisher and Reynolds.

But it will of course it will be for her iconic role as Princess Leia that Fisher will be best remembered. Hopefully there will also be a new recognition for her struggles through the late release of her new book, ‘The Princess Diarist’ as well as other books she has written such as ‘Shockaholic’. The life of both are worthy of a film adaptation and prove what a destructive machine Hollywood past and present can be.