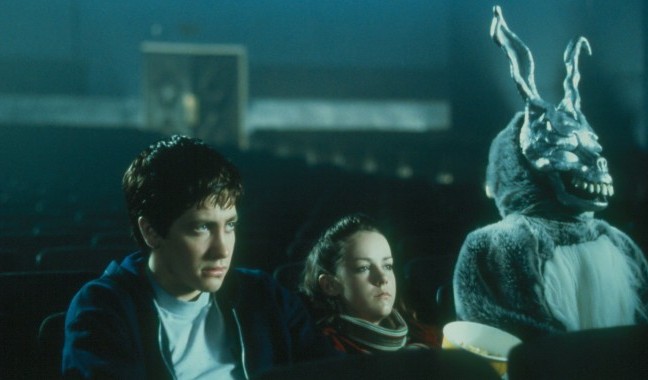 Donnie Darko was a critical and box-office cult success on its release in 2001. Over the years its cult status has grown into becoming a genuine classic. It launched the careers of brother and sister Jake and Maggie Gyllenhaal and was the feature directorial debut of the then 26-year-old Richard Kelly. Kelly also wrote the script and has since only written and directed one other significant film, Southland Tales (2006) this film does display a precocious talent in Kelly that has surprisingly been otherwise realised. Jake and Maggie Gyllenhaal meanwhile went onto great things.

The story is a complex one and for many a confusing one. The style of the film even draws in elements of Steven Spilelberg in its nostalgic background and focus on young people. Significantly though the story does not focus on kids but Gyllenhaal’s character is a confused, hormonal teenager with mixed wires. The film is beautifully shot by the prolific cinematographer Steven Poster (the new restored 4K transfer on Arrow Video perfectly captures Kelly and Poster’s vision). The film opens with Donnie waking at dawn sprawled on top of his bike in the middle of a country road in Virginia. Donnie sleepwalks and cycles back home with a grin on his face as the credits open to the music of Echo and the Bunnymen’s 80s indie classic, ‘The Killing Moon’. It is 2nd October 1988 and Donnie lives with his liberal parents, older sister (Maggie) and young sister in a middle-class neighborhood. Donnie seems normal but sleepwalks and declares to his psychotherapist (Katharine Ross, famous for such roles as the love interest in Butch Cassidy and the Sundance Kid, 1969 and Dustin Hoffman’s gal in The Graduate, 1967) that he has an imaginary invisible friend called Frank, a 6 foot rabbit. He tells her that Frank talks to him. One night Frank wakes him, tells him to go outside and tells him that the world will end in precisely 28 days, 6 hours, 42 minutes, and 12 seconds. At that moment a jet engine from a passenger plane falls into Donnie’s bedroom but his sleepwalking saved him. Later Donnie starts vandalising his school and becoming disruptive following instructions from Frank. But who is Frank? And what does the cryptic message about the end of the world mean? Even the films conclusion doesn’t answer all the questions.

Played out to its 1980s soundtrack including the aforementioned Echo and the Bunnymen, Tears for Fears, The Church and Duran Duran the film otherwise does not push its period setting too hard. Real life brother and sister Jake and Maggie Gyllenhaal play bickering siblings here and are supported by an eclectic cast that includes Drew Barrymore (who don’t forget first cut her teeth as a child actress in that other strange suburban film, E.T.: The Extra Terrestrial, 1982) playing a forward thinking liberal English teacher at Donnie’s High School, the aforementioned Ross and 80s heartthrob Patrick Swayze as a cheesy motivation speaker. To class Donnie Darko within a genre it would be fair to call it a horror film but it would equally misrepresent it. The horror seems to come largely from Donnie’s imagination. Or does it? We are never really clear what is imagined or what is real, given an extra layer by the films denouement. Frank too is not the seemingly cuddly invisible 6 foot rabbit who befriends James Stewart in Harvey (1950) but is instead a rather terrifying alien bug like rabbit that may well be someone in a Halloween costume.

The 4K transfer is beautiful to look at in this 15th anniversary edition released by Arrow Video. Before Christmas Arrow released Donnie Darko on an incredible 4 disc limited edition set. This has now been released again by Arrow as a 2 disc special edition on Blu-ray. The disc includes both the theatrical release version at 113 minutes and a Director’s Cut of 133 minutes with Kelly providing among others the commentary. Also included is his early short film, ‘The Goodbye Place’ made in 1996 that explores some of the themes seen in Donnie Darko. The film is filled with featurettes too numerous to mention including interviews with the cast and crew, as well as the music video by Gary Jules, his haunting version of the Tears for Fears song ‘Mad World’, beautifully and effectively played to a montage towards the end of the film. Donnie Darko will continue to haunt the imagination and I am sure will remain a favourite for many years.