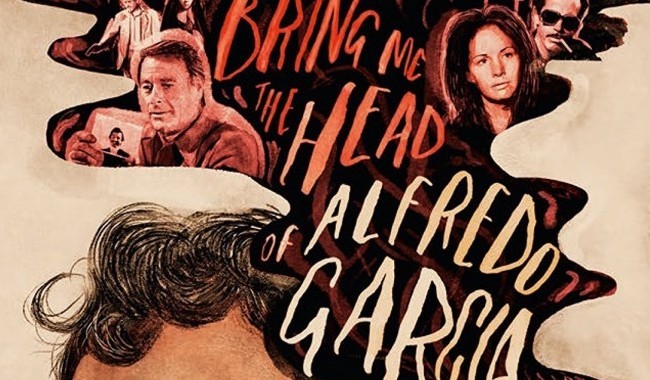 Bring Me the Head of Alfredo Garcia (1974) Blu-ray Review

In 1973 Sam Peckinpah received disappointing box-office returns for Pat Garrett and Billy the Kid and as a result he retreated to Mexico to make Bring Me the Head of Alfredo Garcia the following year and planned to stay there. This did seem to be a short lasting sentiment and decision as he moved back to Hollywood to make The Killer Elite in 1975. This film too performed poorly at the box-office but over the years has gained a cult following as well as having divided critics. In 1978 it was even voted as one of the worst films ever made. Harsh and unjust criticism, but only goes to highlight how divisive this film is. Later in the film it is easy to see where this criticism may lie.

A US-Mexican co-production (with many in the cast and crew being Mexican) from the opening scene it would be easy to be led to believe that he film is a western. In the bucolic opening shot we see a pregnant young woman kicking her feet in a lake admiring the nature round her. She is then summoned by El Jefe (meaning the Boss), her father. She is led at gunpoint by what look like armed bandits or vaquero to her father. El Jefe (Emilio Fernandez) asks her the father is and humiliated by being stripped naked and her arm twisted by her men. Her mother says that the father is a man called Alfredo Garcia. El Jefe is disappointed as this is the man who he has chosen as his successor and in true cliche declares “he was like a son to me”. El Jefe declares that the man who brings back the head of Alfredo Garcia and will offer $1 million as a reward. Two American hitmen search all over Mexico for Alfredo Garcia including Mexico City. They eventually come to a bar and speak to Bennie (Warren Oates), an American piano player who, as a fellow American they believe they can trust. (It so happens everyone in the bar knows Garcia.) Bennie takes up the offer to seek him out and later learns that his lover (Mexican star Isela Vega), a maid at the hotel where he plays had cheated on Bennie with Garcia, giving him further reason to hunt the man down. Elita also confesses that she knows that Garcia was killed in a car crash some weeks ago and she knows where he is buried. With this Bennie and Elita go on a roadtrip believing that this should be easy money, but don’t count on the obstacles that lie in their way leaving a trail of death and violence.

Many of Peckinpah’s key traits are evident in Alfredo Garcia, although there is less of the slow motion violence and action evident in most of his other films it does include a cameo appearance by Kris Kristofferson as a biker and stars Peckinpah regular Oates. Oates has often said to have been a popular and great guy and good friends with Peckinpah. However, the gruelling location shooting and Oates’ heavy drinking, both Oates and Peckinpah were working intoxicated for much of the time. This never drew anything away from either men, although has often been written that Oates became obsessed with Peckinpah, emulating many of his mannerisms and wearing the director’s sunglasses throughout the film. The violence in the film is, as with most of Peckinpah’s films brilliantly handled and edited.

The criticism for the film largely came from the scene where Bennie is on his own travelling with the severed head in a cloth sack (rotting meat was used in the bag, hence the heavy presence of flies) and ends up spending much of the rest of the film talking to it. Little wonder many (if not most) critics were uncomfortable with this, as well as the level of violence that was not unusual in 1970s cinema. Conversely for one of the most celebrated of many American critics, Bring Me the Head of Alfredo Garcia was one of the best films ever made. Peckinpah was not a director who had been previously immune to this divided criticism. Previously such now recognised classics as The Wild Bunch (1969), Straw Dogs (1971) and Pat Garrett and Billy the Kid had divided critics but are now recognised as established classics. The rape sequence in Straw Dogs was particularly challenging to commentators and critics. Was Peckinpah challenging those critics with the seduction/rape sequence in Alfredo Garcia? Not surprising, therefore, that this film should be released with its new 4K restoration by Arrow Video on a double disc release following the labels regular thorough re-evaluation of cult and sometimes forgotten classics. Also included on the disc is an audio only Sam Peckinpah lecture (recorded at the NFT) and the 1993 feature length documentary, ‘Sam Peckinpah: Man of Steel’ with a host of introductions by the participants. Whatever the viewer you have of Peckinpah, he was not dull.