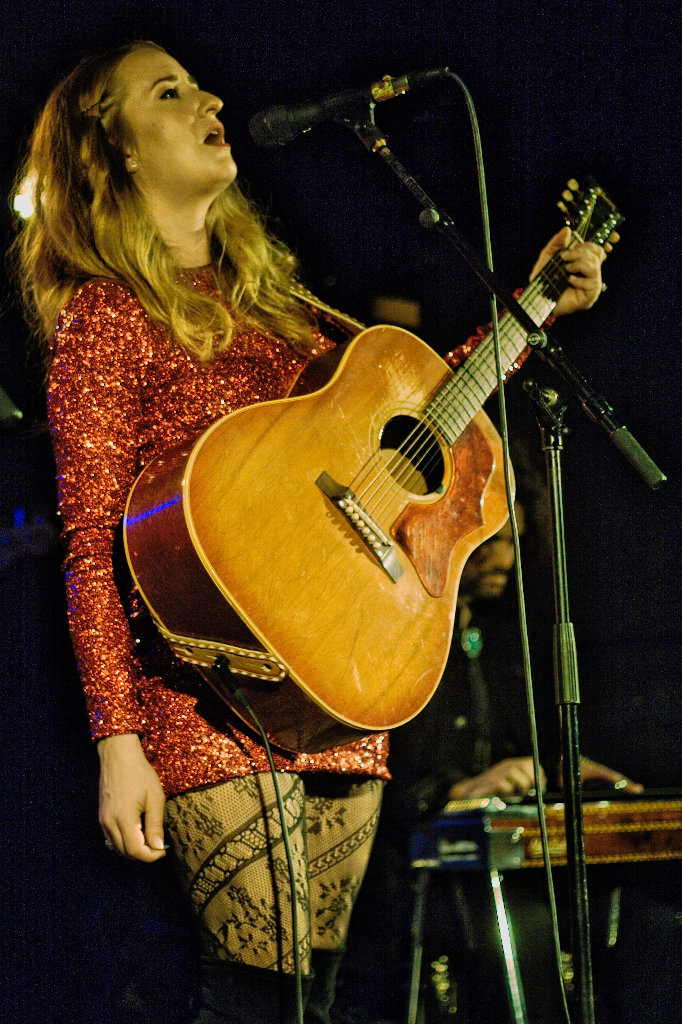 Two Nashville based musicians combined to create a special Glasgow night in another fine Celtic Connections show. Aaron Lee Tasjan is already veteran of several bands and is creating a stir as a singer and a songwriter, while Margo Price is one of the up and coming stars of the country music scene. Two very different sets thrilled a large audience in a show to be remembered.

Aaron Lee Tasjan strolled onto the stage carrying his acoustic guitar. With an easy going manner, some fine introductions and a few interesting tales, he stood tall in his cowboy hat. His country folk songs, delivered in a smooth voice with just a touch of grit, were passionate and entertaining.

Showcasing his excellent solo album Silver Tears, Tasjan established a good rapport with his audience, delivering the beautiful Memphis Rain and Lucinda’s Room, a song about a hotel in Portland where each room is themed for a musician. He stayed in one with a mural of Lucinda Williams, whom he supported in Los Angeles recently. Other tracks played included Twelve Bar Blues, introduced as a song about bars rather than blues, and Little Movies, which he claimed to have written while on an acid trip.

Also displaying some very good guitar technique, Tasjan’s set was much too short. He finished with Streets of Galilee, which included a humorous spoken section on the influence that The Beatles and Ted Nugent had on his music. It was a fine way to end an excellent performance.

This show was Margo Price’s Scottish debut, but judging from the many people singing along to every song she already has many fans here. One of country music’s new young breed, Price played a superb set full of energy. Mixing tracks from her stellar debut album Midwest Farmer’s Daughter with a few classic covers, Price thrilled with crowd with her strong, fervent vocals and her intensity, giving everything in every song. A word too for her backing band who were excellent all night, creating a strong rhythm and adding some lovely bursts of lead and steel guitar.

The early part of the set was all from Price’s album, with tracks like Tennessee Song and Desperate And Depressed standing out. She then played a couple of very good newer tracks. Paper Cowboy started slowly, the sweet vocals and steel guitar working well together, before it burst into life, and You Told Me With Your Eyes, a lovely acoustic love song.

A couple of covers were mixed in too: Dolly Parton’s Jolene was a throwback to the older country sound while Johnny Cash’s Big River was delivered with style in a very different arrangement that worked well. It was then back to the album for superb versions of the slow heartbreaker Hands Of Time and Weekender, a modern twist on the jail song. The closing Hurtin’ (On The Bottle) saw Price end her set dancing in the midst of the crowd before disappearing off to the side of the stage, leaving the band to close the song.

The band was quickly back for the encore, with a brilliant version of Me And Bobby McGhee a real highlight. Perhaps closer to the Kris Kristofferson original than the more common Janis Joplin cover, Margo Price’s vocals were quite superb, hitting every note and living the loss and regret in the lyrics. Her own Four Years Of Chances ended the night in fine style before Price and her band took a well deserved bow.

Margo Price is heading for superstar status in Nashville and this tour might well be the last chance to see her in a relatively small venue. Those who were lucky enough to share this experience will remember a fine night of music and a stellar display from an immensely talented performer.