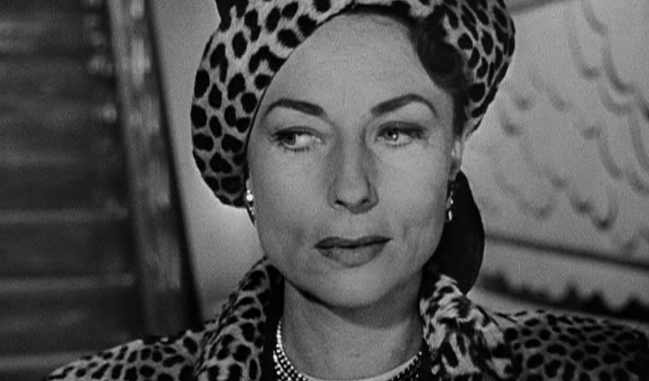 The Films of Agnes Moorehead

Agnes Moorehead is perhaps best known as the witchy mother Endora in the hit 1960s – 70s TV family comedy Bewitched!. This show came at the end of a long illustrious career in cinema that started in the stock company of Orson Welles. In fact her first three films were with Welles’ beginning with Citizen Kane (1941) in which Moorehead played in a small character role, that of boy Kane’s mother. This maybe a small part, but never the less a significant part with the childhood scene being a linchpin to the film and the famous ‘Rosebud’ as the film’s McGuffin. Her next film is arguably her strongest performance as the doomed in love older woman in The Magnificent Ambersons (1942), Welles’ classic turn of the century family saga. Already, even at this early stage of her film career, there is a pattern emerging of Agnes playing older dowager or spinster roles, something that she would master in various guises over the next 30 years. She was already 40 years old when she appeared in Citizen Kane, her first film. With her angular features, slim build and often seen to be looking down her nose this was a feature of her character parts.

Agnes Moorehead was an actress of great talent, both on the stage and the screen. However, her career would be stymied by some dreadful miscasting, most famously in one of the most famous miscast films of them all, The Conqueror (1955) which starred John Wayne as Genghis Khan (!) and with Moorehead in oriental make-up as a Mongol mother-in-law. This was not the first nor the last time that she would play such a role. She only starred in lead roles on a number of occasions. One such film was a B horror film called The Bat, which even by 1959 when the film was released was a dated murderer as a ghoul stalking in an old mansion kind of horror film. Having said that starring opposite Vincent Price the pair added a great deal of class to this cheap film making it something of a minor horror classic.

Despite never winning an Oscar (although was nominated 4 times, including as late as 1964 for Hush…, Hush, Sweet Charlotte) her career was consistent in that a couple of good roles and good films were interspersed with a string of duds. A good example of a key character film was in the Humphrey Bogart film Dark Passage (1947) in which Bogie plays a convict on the lam. After having plastic surgery he hides out a former lover’s (Lauren Bacall). A friend (Moorehead) suspects that the new stranger is really the gangster who has escaped when she ends up being the villain of the piece. Moorehead is at her bitchy best here and in many ways makes the character part a key role. But often she would play very much character or background roles such as in Douglas Sirk’s Magnificent Obsession (1954) where she was merely Jane Wyman’s nurse but in her next film for Sirk, All That Heaven Allows (1955), she is seen with her flaming red hair as the middle-aged and middle-class gossipy neighbour who comes good in the end.

Nissen’s book, separated, as any book that is titled ‘The Films of…’ into a chapter of 2-5 pages for each film dependent on the importance of the film or how big Agnes’s roles was. Within each chapter Nissen would cover some brief biographical references, marriages, travel and where she lived if it is relevant. Curious then that after her last film (as the voice of the goose for the animated family film Charlotte’s Web in 1973) that there the book ends abruptly without mention of when or how Agnes Moorehead died or her legacy as a coda or conclusion. The book is a well studied examination of a character actress and her films but doesn’t give too much in the way of biography and only gives a brief mention surrounding suspicions of her being a lesbian but this was never proven and was perhaps just Hollywood gossip. Having said all this there are other biographies on Moorehead out there, while the MO of this book is her films.