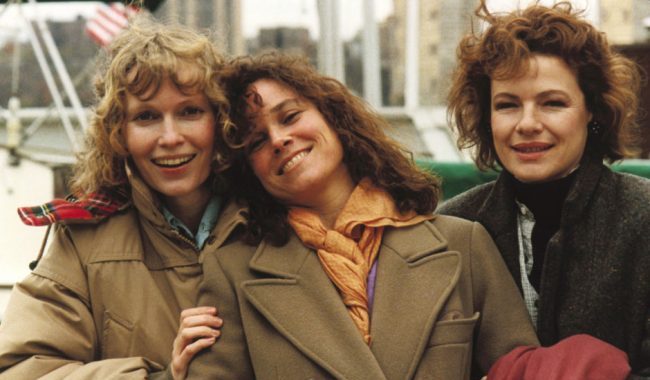 So, Arrow Academy have now released their third box-set of Woody Allen’s films, together spanning the majority of his career from 1971-1991, an oeuvre of 20 years. In the early set (1971-1978) there were some glaring omissions, namely films he didn’t direct such as Play It Again Sam (1972) (as fine an example as any of his films as he wrote it) and the political comedy, The Front (1976). However, also missing and a conspicuous omission was Take the Money and Run (1969), his first directorial, writing and starring effort. What is missing from the most recent set is the one segment he directed for the multi-story, multi-director film, New York Stories (1989). I suspect that this is the last box-set and won’t go any further with the films from Husbands and Wives (1992) on. Allen’s earliest films were made by United Artists before he moved to Orion Pictures in 1980, ending his relationship with this studio in 1991 with the last film in this current set, Shadows and Fog (1991).

As I mentioned in a previous review, each set includes an unqualified classic. The first set had Annie Hall (1977), the second, Manhattan (1979) and the current set has Hannah and Her Sisters (1986). Hannah and Her Sisters is the first film included in the box-set of 7 films (the previous collections had 6 films each). Like previous films, Allen surrounded himself with his familiar family, including his then long term partner and co-star, Mia Farrow in all 7 films, 3 with Dianne Wiest, all 7 films with regular editor Susan E. Morse, as well executive producers Jack Rollins and Charles H. Joffe (not forgetting the familiar old time soundtrack and the Windsor White Condensed typeface on black background on nearly all his films). Other regulars include Tony Roberts, best known for starring with Allen in Play It Again Sam, Julie Kavner (if her voice sounds familiar, she is the voice of Marge Simpson) and Sam Waterston.

Hannah and Her Sisters co-starred Michael Caine in an Oscar winning performance in a tragi-comic role as he plays a duplicitous respectable British New Yorker who seduces his sister-in-law (Barbara Hershey). In this film Woody successfully blends some of his most intelligent comedy in a comedy of errors. Most of the darker aspects of the film are broken up with Allen playing Hannah’s (Farrow) ex-husband and hypochondriac who goes from believing he has a brain tumor to discovering it was a false alarm. This leads him to question life and our inevitable destruction and his comical search for a faith (Mickey: “If there’s a God, why were there Nazis?” Mickey’s father: “How the hell do I know why there were Nazis? I don’t know how the can opener works!”) . Even usual Ingmar Bergman regular, Max Von Sydow as the cut off from society artist living with Hannah’s sister has funny lines, in more Nazi gallows humour (he is not known for his comedy): “You missed a very dull TV show on Auschwitz. More gruesome film clips, and more puzzled intellectuals declaring their mystification over the systematic murder of millions. The reason they can never answer the question “How could it possibly happen?” is that it’s the wrong question. Given what people are, the question is “Why doesn’t it happen more often?””

Chronologically the next film is Radio Days (1987), perhaps one of his most underrated films. Clearly drawing from his own childhood experiences, Woody narrates the story of his family growing up in Rockaway Beach, Long Island in the early 1940s. He talks of his radio heroes, the music he and his family would listen to while growing up and some of the incidents and characters in the neighbourhood they lived in, as well as the dream of going to Radio City Music Hall in Manhattan. Although this is a fictitious story, the blurring between real experience and fiction are perhaps more blurred than ever here.

The next two films in the collection are two of the most serious in the set; lesser known and generally lesser works: September (1987) and Another Woman (1988). Both of these films are feminist studies with the former a Chekovian drama (similar in plot to Chekov’s ‘Uncle Vanya’) about a depressed soul (Farrow, at her mousey best) who loves a man who loves her best friend etc. Another Woman has stronger singleton and writer Gena Rowlands becoming fascinated with the patients at a next door psychiatrist.

Another similar film in the collection is Alice (1990) which this times sees mousey Farrow as the WASP wife to well off William Hurt. Visiting an acupuncturist she is given a potion that makes her invisible leading her to uncover her husband’s affair.

Another classic on the disc is the tragedy Crimes and Misdemeanors (1989) with Allen hilarious sparring against his cocky and successful brother-in-law (Alda). This story, like Hannah and Her Sisters is off-set by the tragedy drama that sees a successful ophthalmologist (Martin Landau) being drawn into having his mistress (Anjelica Huston) murdered to save his own marriage.

The final film is marmite, even for Woody Allen fans. Shadows and Fog (1991) is a complete diversion from anything else he did previously (well since Zelig, 1983 at any rate) and is a hommage to 1920s German Expressionism. Set over one foggy night in an Austro-German city with Allen and Farrow caught up with a serial killer and sex murderer wandering the foggy streets. This film is a diversion from the usual Chekov or Bergmanesque dramas that Allen is best known for and instead references among other things Fritz Lang’s M (1931), Brecht, Arnold Döblin and 1920s sex crimes. Never the less critics and fans were luke-warm at best in a film that contained few classic Allen moments, but is far from his worst film.

Again there is clear development in Allen’s work and only intermittently would he reach the heights achieved in any of these three box-sets and never again would match the box-office returns. True, Woody Allen remains very popular in France and has a large cult and intellectual following in other countries for those who appreciate his WASP New York intellectual referenced jokes. I am sure that there is more to come from Allen though and it would be great to see him in a return to form.

Alas, there are no extras on the discs other than trailers.