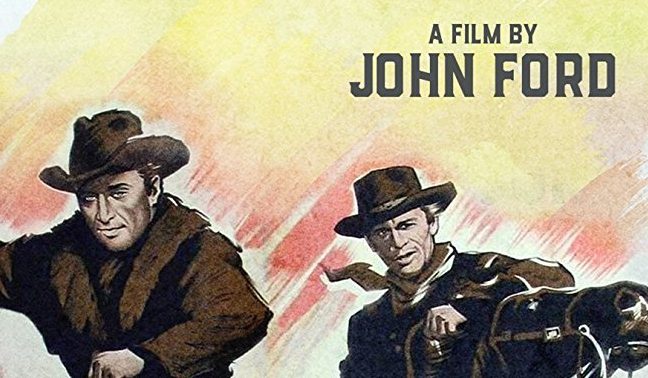 At face value and at the start Two Rode Together (1961) seems to be one of John Ford’s more light hearted westerns. The first part of the film would suggest as such at any rate. But as soon as the film gets to the meat of the story of white settlers paying bounties to have their long gone kidnapped family members and children brought back and freed from the Cheyenne, the film gets darker with each passing minute. It recalls themes from one of Ford’s most powerful and best known westerns, The Searchers (1956), in which John Wayne (the film in which Wayne is able to demonstrate his acting ability) plays Ethan Edwards who vengefully spends years hunting down the kidnapped child of a settler family and finds that she has become a Comanche squaw. On seeing this Edwards’ angrily wants to kill her. In Two Rode Together Ford returns to this theme and shows a similar attitude of what they see as race defilement from a society at large and not just the racism of one person. White settler abduction was currency among many Native American tribes and in this sense Two Rode Together accurately portrays this theme.

The opening of the filming is laid back and light. It begins in a frontier town with a stagecoach riding in and Marshal Guthrie McCabe (James Stewart) dosing with one foot on the porch pillar (recalling a restful Henry Fonda as Wyatt Earp in My Darling Clementine, 1946). A short while later a dusty troop of soldiers ride in led by Lieutenant Jim Gary (Richard Widmark) who makes his presence known to McCabe. The two men are both friends. The lieutenant persuades a reluctant McCabe to be escorted to the fort where Major Fraser (John McIntire) and Lt. Gary try to persuade him to liaise with Comanches to bring back white captives. The reason McCabe was welcomed to the fort by the camped settlers now makes sense to him. Initially McCabe angrily refuses but is persuaded at a cost. One by one the settlers give a description of their captives, most of whom were kidnapped by the Comanches as children. McCabe angrily makes them wake up to the reality that they will now be either brain washed slaves or fully integrated ‘savages’. He and Lt. Gary travel to the Comanche encampment where arms are traded with Chief Quanah Parker (Henry Brandon). (Chief Quanah Parker was a real life Comanche chief who traded white skins.) He is receptive to the exchange and two, a wild Indian ‘buck’ and an unknown Mexican woman and the wife to a rival of Parker’s are taken back. Two other women refuse to go back. Once back at the fort they are met with hostility (or in the Mexican girl’s case, doubly ostracised for being both Comanche and a Latino in white society.

Allegedly John Ford made this film as a favour to Columbia boss, Harry Cohn. What cannot be denied though is that once again Ford has made another western with a deeply intelligent background. In The Searchers the family welcome Debbie, the Comanche woman back into the family fold where she still has a memory. In Two Rode Together there is no such happiness with the captured boy brought back and [spoiler alert] is also lynched for murdering the woman who thinks he is her son. This lynching and the attitude of the settlers, as well as at the officer’s ball highlights that not only are the Indians portrayed as savage but also the white society, portraying them no better than the worst elements of the Comanches. Contrary to other Ford westerns, in particular those shot in Monument Valley such as The Searchers and She Wore a Yellow Ribbon (1949) it is filmed with big, but dark brooding skies across the plains and not the sunny desert vistas. A couple of years after Two Rode Together Ford was conscious of the injustice and mis-treatment that his films dealt out to the Native Americans and as a result in his last western, Cheyenne Autumn (1964) the Cheyenne are the protagonists and their struggles, plight and the injustice against them is thrown into relief.

The film is not awash with extras as with many in the Masters of Cinema series from Eureka! but one included here is a high quality video essay by Tag Gallagher (who also provided a similar video essay to the recent Arrow Academy release of My Darling Clementine) who gives a poetic appreciation to the film. The HD presentation is also very impressive with minimal grain on the film.