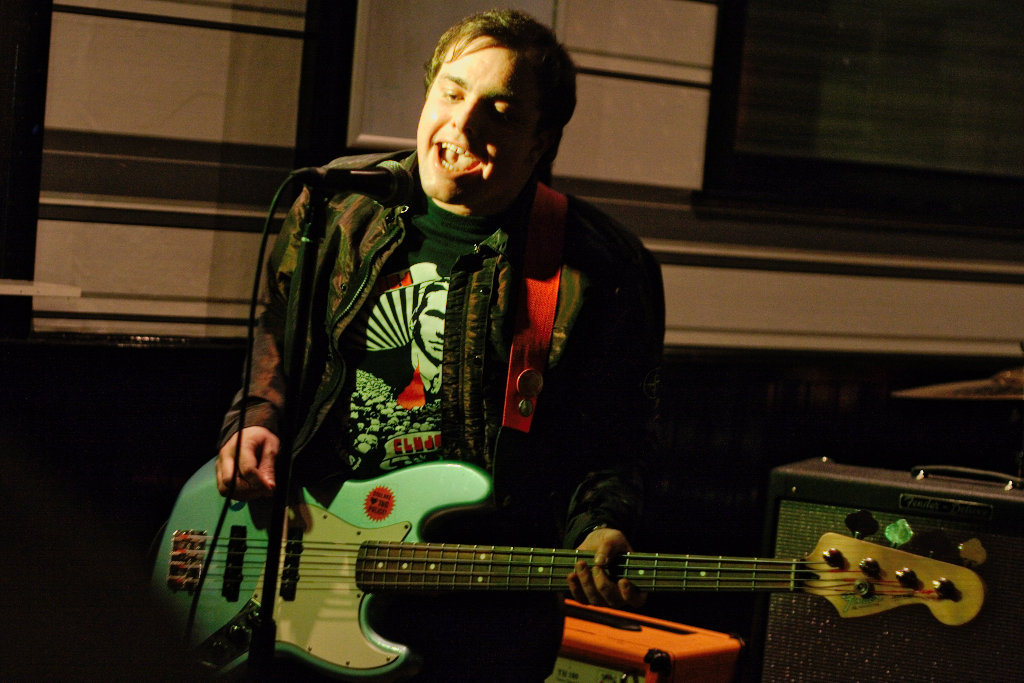 An all weekend festival. More than 30 live bands in 4 venues across 3 days. Hundreds of people paying to watch. It seems that Motherwell does Make Music. And the former steel town near Glasgow clearly has plenty of talent to display.

This new indoor festival was the idea of Derek Watson (pictured), bassist with Motherwell indie band The Banter Thiefs. Seeking a showcase for the many talented young musicians in the area he decided that the best solution was to put on an event himself. A great deal of hard work has now been rewarded with a very successful event.

Saturday night at a very busy Jack Daniels bar saw five bands play to an enthusiastic audience, who all appeared to be in good spirits. The drink flowed, the dancing started and more people seemed to pour into the small venue than was physically possible. It was four deep at the bar by the end of the night.

Jonny Jack got things started with some fast paced acoustic songs. Backed by bass and drums, his rhythmic and melodic music was entertaining, and he showed a very good vocal range, hitting the high notes well. The slightly slower track Long Gone was the best of a decent opening set.

Caulder were up next. The three piece indie band have a fast and furious style, driven on by a powerful drummer. Their high energy performance really engaged the audience, the now boisterous crowd seemingly including a fair few fans who sung along with every word. Their closing track Hollow, a big anthemic song, was one of several that were very well received.

Another young trio, going by the name of Dogtooth, continued in a similar vein. Their heavy indie sound made you wonder whether there were actually more than three musicians involved as the vocals soared over a fast beat. Some lovely guitar work added melodic colour and again their fans were front and centre, singing along. The band’s single Rebel was the highlight of a very good set.

Pyramids took things in a slightly different direction. Their rock sound is slower and with an electronic influence, a richly textured sound that resonates. They have a great deal of musical variety, with several songs building and falling and long instrumental phases. The five piece played a decent set, although it didn’t appear to engage the audience quite as much as the previous two bands had.

The Banter Thiefs headlined the show, closing the night in tremendous style. Their high energy indie sound is infectious and the audience was soon chanting along to the anthemic choruses in their songs. Recent line up changes have meant this is now a four piece band, but there was no lessening of the intensity or volume. Confidence and energy exuded from the band as they gave it their all. Old favourites Sly Tinnies and All Your Life stood out in a blistering set that had many dancing along until the very end, which was well after midnight.

So Motherwell does indeed Make Music – and some very good music at that. It was tremendous to see such a large crowd turning out to support an event that gave young musicians an opportunity to shine, and of course to see them take that opportunity so well. This was a fine night of music enjoyed by many.