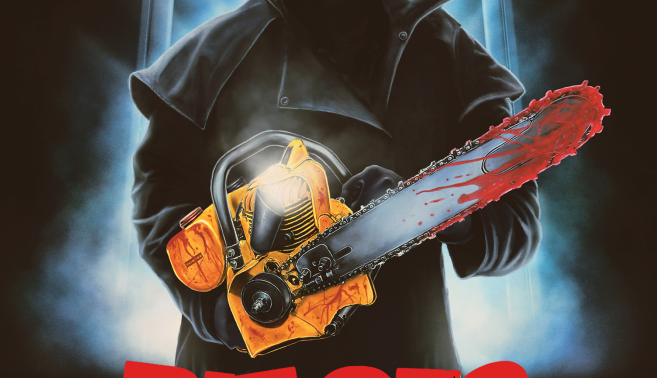 This schlocky horror from Spain draws in many elements from other horror films. There is a killer running around with a chainsaw (I don’t think I need to name that reference) as well as proper bogey man horrors like the Halloween or Friday the 13th franchise. But most significantly it is also a giallo film that recalls some of Dario Argento’s classic psycho stalkerfilms. Pieces was made in 1982 and is in many senses as a Spanish film a Post-Franco horror that comes at the tail end of a whole spate of horror films from Spain that challenged the authorities prevailing conservatism of the country. In the UK its release was buried among all the myriad of other exploitation horror films that were released in the early 1980s that swamped the VHS or Betamax markets. Over the years the film has grown in its cult status and this release by Arrow Video is a re-packaging and re-boot of their earlier release in 2011. However, this release has a whole new set of documentaries and source material accompanying it.

The plot of Pieces (released in Spain as Mil gritos tiene la noche) is standard slasher and giallo fare. The prologue opens in Boston in 1942 (actually it was shot in Madrid) and sees a young 10-year-old boy putting together a jigsaw puzzle on the floor of a naked woman. When his mother enters the room she is horrified at the depraved picture puzzle that her son is diligently working on and beats him. The boy gets up and takes an axe to his mother. When the police arrive they find the boy cowering in a cupboard while the chopped up limbs of his mother lie scattered amongst all the blood and carnage on the floor. 40 years later and a fresh bunch of killings begin to happen at the local University with students found dismembered with limbs missing. The victims are stalked by a black hat and coated figure wielding a chainsaw. The camera also shows the occasional gloved hand going through the same bloodied jigsaw puzzle. The film often presents the viewer with a number of red herrings as to the killer’s identity such as well known character actors Jack Taylor as a rather strange and mildly camp Professor at the University and the oversized loner gardner played by Paul Smith (one of his better known roles was as Bluto in Popeye, 1980).

Despite there being some American actors in this film, there are a few problematics that international films such as this one throw up, such as what language to watch it in. The film is presented here in both the original Spanish and American dubs and cuts. True that some of the more experienced actors are American and many of the younger cast members are Spanish, the dubbing is poor and annoying in either language, although it is probably better to watch in Spanish or a little trashier in English. If watched as a giallo in the tradition of Argento or other Italian psycho horror thrillers rather than a slasher it is a better viewing experience. Gory and bloody it maybe and the ultimate films conclusion is at times quite shocking. Yet like many exploitation films of the time it has the usual elements of teenage sex, plenty of boobs and lots of blood and dismembered corpses. An unpleasant experience at times it might be and its style and tropes might be verging on parody it will obviously only appeal to genre lovers.

Extras on the disc are plentiful, but best of all is the short appreciation visual essay on the film and a documentary about the director, Juan Piquer Simón who went on to make Slugs (1988), also recently released by Arrow Video. Some of the extras are a bit of a dirge to go through but an interesting giallo none the less.