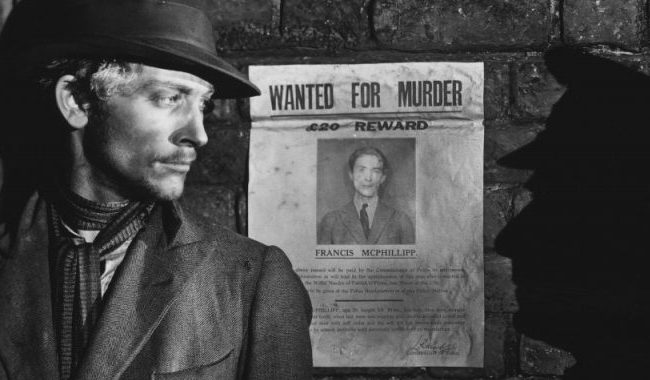 A newly restored version by BFI of a hitherto little seen film is quite a surprise. Released as a dual format disc the film is shown in both the shorter part-talkie version with the original synchronised sound and the (better) silent version with a new score by Garth Knox. Released in 1929 The Informer is an interesting thriller melodrama that deals with the politics and personal intrigues just prior to the national independence of Ireland which forms the backdrop to the film. In 1922 Sinn Féin won its independence over British rule following the 1916 Easter Uprising. It is in this heady period that the film is set. Set in Dublin, but filmed almost entirely at Elstree Studios the film opens with a meeting by a political group (the group is not named in the film but the insinuation is clear that it is the IRA) which comes under attack by machine gun and automatic weapon fire. In the ensuing melee one of the members of the gang, Francis McPhillip (Carl Harbord) shoots dead the Chief of Police. For his own protection the group send Francis into exile while the police search for him. They arrange for him to leave for the USA but before he does he wishes to say goodbye to his mother and ex-gal, Katie Fox (Lya de Putti). Katie, also a member of the nationalist group is now with Francis’s old friend, Gypo (played by Swedish actor, Lars Hanson). But when Gypo seees Katie and Francis looking close he becomes jealous and convinced that they are plotting to be together. In his jealous rage he goes to the police to collect the reward for Francis’s capture and go against the gang. Francis is cornered at his mother’s house where he is killed in a dramatic shootout on the roof with the police. Wracked with guilt Gypo confesses to Katie and what he had done and his reason. She protects him even if the gang, led by Dan Gallagher (Warwick Ward) suspect that Gypo may have been the rat. Another member of the gang sees Gypo with a wad of money and is convinced that he is the one they’re after. Gypo goes on the run, remaining full of guilt.

What is evident in viewing both the part-talkie sound version and the silent version is how much quicker the action is in the silent film, despite its longer length (at 100 minutes as opposed to 84 minutes). On one of the extras on the disc there is a scene comparison scene in which Katie is being questioned about the gang when the gang member states that he has seen the money. The dialogue is slow in the sound version, while the accents are totally off (Ward with a strong British accent and de Putti who was Hungarian was dubbed into English, not Irish). The accents are even clearer as Irish in the intertitles of the silent version – “I saw the money, so I did”. Knox’s new score also gives the film an Irish accent as he uses tin whistles, pipes and bodhran drums to good effect. (There is an extra on the disc and in the booklet the added value Garth Knox’s music adds is made clear.)

The film is a dramatisation of a 1925 novel by Liam O’Flaherty. It was more famously made by John Ford in 1935 with stoney faced Victor McLaglen playing Gypo, more similar in description to that in O’Flaherty’s novel. It so happened that O’Flaherty was also Ford’s cousin. There are many liberties taken with the novel in the film. It certainly has more melodrama elements to it and pushes the Katie Fox character to the foreground while neatly wrapping up the ending in the manner of any good melodrama.

The film also has an international flavour to it, as well as a contemporary British one. Boasting international leads in Hanson from Sweden, who had recently arrived in Britain from Hollywood having starred in a couple of hits with fellow Swede Greta Garbo and Hungarian de Putti (who was in Dupont’s Variety, recently released on dual format discs by Eureka!). The director was a German, Arthur Robison who had made the German Expressionist classic Warning Shadows (1923), while the cinematography was masterfully done by another German Werner Brandes, who the previous year shot the British classic, Piccadilly and worked with Fritz Lang. The shadows, chiaroscuro cinematography and close-up camerawork gives the film so much of its tension. Like another director who was becoming the leading light in British cinema at the time, Alfred Hitchcock much was being used learnt from the German filmmakers. Much of this artistic style was lost when cinema turned to sound, making the action much less fluid and more static. Hitchcock was one of the few working in Britain who was able to turn this to his advantage. Once again this is highlighted on the sound and silent comparisons on the disc’s extras.

BFI make the most of their ability to pull in a host of archive material on the disc, including 8 contemporary documentary shorts as well as well written essays discussing the film and its differences to O’Flaherty’s novel. A once overlooked film that will hopefully receive new recognition.