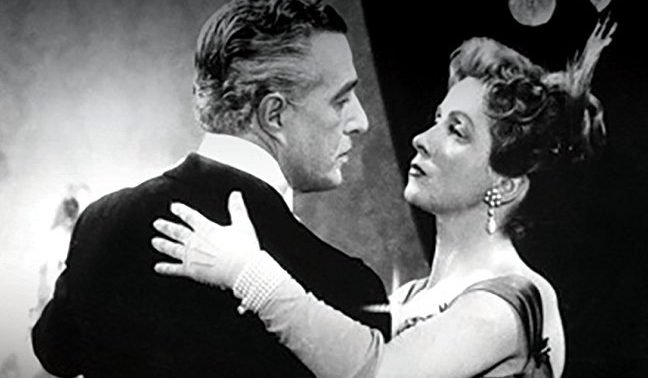 Three years before French director Max Ophuls made his penultimate film, Madame de… he made La Ronde (1950). In that film, based off Arthur Schnitzler’s fin-de-siècle play, the plot is a Viennese set drama opening with a prostitute who meets a soldier and spends time with her, he in turn meets a maid who falls in love with him and is abandoned and she is then swept up by her employer’s son and so on for the next 10 people until the story goes for full circle and ends back with the prostitute.

This ronde theme is repeated in Madame de… in which a set of diamond studded earrings end up doing the rounds, linking and bringing people together as well as pull them apart. Again, set in the belle epoque period, this time in France, the film opens with the wife of a general, Lousie (Danielle Darrieux) who is going through her jewellery and fur coats looking for something to sell to get her more ready cash. She decides on a pair of diamond earrings, a gift from her husband. She sells them to the jeweller who is concerned at what her husband will say. She will think of something she says. One evening Louise goes to the opera with her husband, the General (Charles Boyer). While sat in the opera box she tells him that the earrings are missing, worried that she has lost them, leading the General to retrace their steps and search the opera house for them. A scandal then threatens to break out that they have been stolen. The next day the jeweller informs the General his wife had sold him the earrings and he was concerned offering to sell them back to the General. Back home, he humours his wife’s story, conscious that not only is she continuing with this lie but also that she would sell this special gift, given to her by him the day after the wedding day. He in turn gives the earrings to his mistress as a gift when she leaves France for Constantinople. There, the mistress, Lola uses the diamonds to clear her gambling debts. The earrings again end up in a jeweller’s in Constantinople where they are eventually bought by an Italian, Baron Fabrizio Donati (Vittorio de Sica). At a railway station in Basel, Donati becomes enchanted with a woman he sees at the station and later bumps into her in France. She is the wife of the General and begins an affair with him when he gives her the gift of [her old] earrings, giving the earrings greater significance for her.

Max Ophuls, especially in his last films has something of the Lubitsch touch to them. Like Lubitsch, Max Ophuls was an emigree. Born in Saarland in western Germany he also lived in Alsace-Lorraine, the formerly disputed French-German territory. He later became French and, as a Jew made his way to Hollywood in 1941 as the Nazis swept through Europe. The ‘Lubitsch touch’ was the distinctly sophisticated European style that Ernst Lubitsch added to his films. This style brought with it a sophisticated, subtle caustic wit, an old European elegance and sex. These attributes can easily be accredited to Ophuls films, especially the later ones. There is a sumptuous attention of detail and Viennese style and elegance in Madame de… that is highlighted further by Christian Matras’s camerawork as he sweeps and cranes through the elegant interiors. Ophuls pushed his cameramen to make difficult to light sweeps such as those in the film. This is underscored and compliments the music of classical composer Oscar Straus (no relation to the more famous Strauss dynasty, although his name does add further elegance to the film) and Georges Van Parys, with its swirling Viennese style of waltzes. There are even plenty of balls for the viewer to enjoy.

The film stars some of the great French actors, including Danielle Darrieux, Ophuls favourite actress. She has the look and perfectly delivers the emotion required for the role and is one of France’s most popular actresses. On an extra on the disc it is said that Darrieux perfected a blank look on her face that also said much about the character she played and had a complicit working relationship with Ophuls. Her two co-stars are also big names. Charles Boyer had been a famous actor in France in the 1930s before he was lured to Hollywood where he remained for many years and became known there as the ‘French lover’, a title that he and Hollywood used to effect. Madame de… signalled his return to France, but his star pretensions didn’t warm to the crew on the film who, on extras on the disc, speak of the actor’s diva like behaviour and demands. The other big name in the film is Vittorio de Sica, who had multiple roles in the history of cinema as both an actor and a director, perhaps best known as the director of one of the greatest of all Italian neo-realist films, Bicycle Thieves (1946). As an actor he also appeared in over 100 films, both in Europe and Hollywood and in his later career he also directed many of Sophia Loren’s best Italian films. Here, in Madame de…, he is perfectly cast as the middle-aged, grey haired and elegant Italian ambassador.

BFI’s release of Madame de… gives absolute justice to the now almost forgotten brilliance of this film. The restoration of the film looks perfect and silvery on Blu-ray, bringing out the films bourgeois elegance and lighting on the actors faces as the camera moves gracefully like a waltz around the sets. Extras on the disc are also superb as surviving actors and crew members of the film recall its making and its director including a 2005 interview with Alain Jessua who was a young assistant director on the film and talks with great affection about Ophuls. There is also an hour long documentary on the Making Of the film as well as a booklet with some interesting essays by the likes of Laura Mulvey among others.