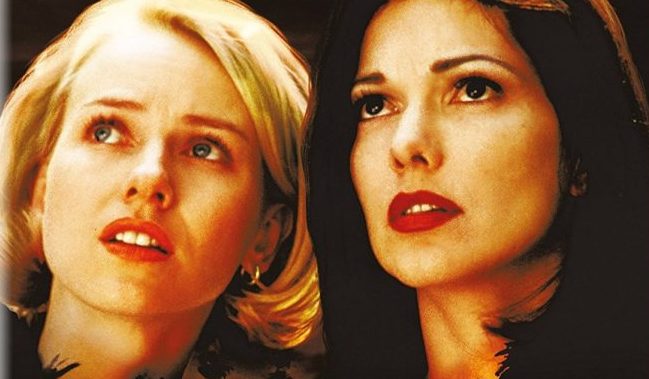 When ‘Twin Peaks’ finished its second season in 1991 Agent Cooper said that he would return to Twin Peaks in 25 years. Well true to his word (and David Lynch and Mark Frost’s) ‘Twin Peaks’ has returned to TV screens with much fanfare, well 25 years + 1; of course in 1992 Lynch did make the feature film of ‘Twin Peaks’, Twin Peaks: Fire Walk With Me. To mark the new TV series, Studiocanal have re-released Mulholland Drive (2001), Lynch’s Hollywood set neo-noir that was also originally conceived as a TV series. One theme that runs right through Lynch’s films is the bizarre that Lynch is able to bring out in the banal. Mulholland Drive is no exception to this with also sorts of strangeness running through the film.

The film opens with a Hollywood jazz scene, shot like a collage and resembling a Busby Berkeley number showing dancers jiving. The next shot is a noirish night-time shot of a car racing along the bendy Mulholland Drive high in the Hollywood hills when it suddenely crashes. A dark haired woman (Laura Elena Harring) crawls out and makes her way to an empty apartment that has been rented out to a starry eyed blonde actress called Betty Elms (Naomi Watts). Betty has just arrived in Hollywood to audition in a film for a romantic role. The dark haired woman has no recollection of who she is or where she lives or was going before the crash. On seeing a poster of Rita Hayworth in Gilda (another film noir reference) she decides that her name is “Rita”. When Betty arrives at the apartment she is naturally shocked to see ‘Rita’ there and helps her to find out who she is. Certain incidents start to prompt Rita and Betty to uncover who she is, such as seing the name Diane on a waitresses name badge prompting her to think the name ‘Diane Selwyn’ rings a bell. They go through the phone book to find Diane Selwyn. They eventually enter the house of a woman they believe is Diane Selwyn and find a young woman dead on a bed who has clearly been dead for a few days. Terrified, they return to Betty’s apartment and begin to morph into each other, entering into a lesbian relationship but the mystery of the dark headed woman deepens. Was she being chased at the time of the crash or is she bad?

In many ways this is David Lynch’s paean to old Hollywood, but as this is a David Lynch film it is also much more. It references film noir with Rita Hayworth, the old Spanish Hollywood villas, a dark haired femme-fatale and the appearance of Ann Miller, a regular support in many Hollywood musicals including Signin’ in the Rain (1952) in what was to be her last film (indeed Harring does look like Miller’s younger self). It is also an attempt to show Hollywood’s darker underbelly and contrasts this with seedier elements in Los Angeles and Hollywood society. As mentioned, this was intended as a TV series but was turned down by TV executives who allegedly didn’t get it. No surprise there then, without appreciating what a groundbreaking success ‘Twin Peaks’ had been. Lynch refused to give away to the executives how the plot was going to develop unless they bought the pitch. They refused and so he developed it further into a feature film. Many critics have cited Mulholland Drive as Lynch’s masterpiece, others have been less enthusiastic. The film does lose some of it thread in the last half hour and becomes less focussed and more confused, especially when it winds up in the strange Club Silencio. Indeed it does feel as though it is repeating too many motifs from ‘Twin Peaks’ including dwarves in nightclubs and there is a strange blue box (which also seems to reference the Pandora’s Box in the classic film noir Kiss Me Deadly, 1955) but never the less as a mystery and a neo-noir it is up there with some of the best and in its most coherent moments, one of his most accomplished films.

This release by Studiocanal is more than a cash-in on the new ‘Twin Peaks’ series as it is absolutely filled to the brim with extras including interviews with the cast and crew, an interview with the composer and Lynch regular, Angelo Badalamenti and is  now newly restored looking lusher than ever.