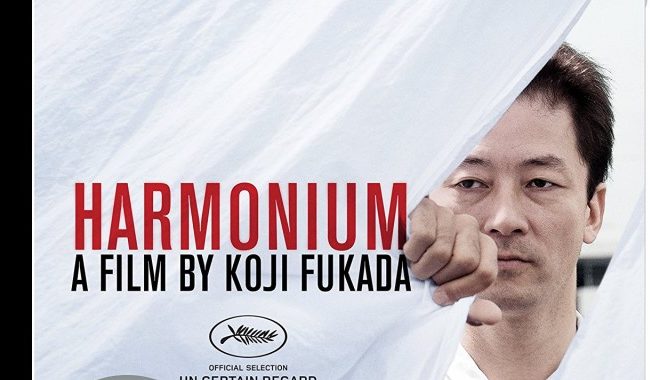 Over the past couple of years there have been some very good Japanese films set in suburbs, where the banality and normality of existence is either disturbed or something disquieting takes place. I am thinking of such films as I am a Hero, Journey to the Shore and Creepy (the last two also released on the Eureka! label). The film opens in a typical Japanese middle-class home where the family gather for breakfast. The mother, Akie tends to their 10-year-old daughter, Hotaru who has been practicising the harmonium for a school concert. Toshio, the husband meanwhile is disinterested and reading the paper. Akie and Hotaru say their prayers for Akie is a practising protestant, he is not. After he has eaten he leaves the table without saying a word. Despite being a family unit it would appear that not everything in this banal domestic home is not as harmonious the films English title would suggest. Toshio works from a garage by home where he runs his own metal workshop business. One day a man turns up looking for work. This is Yasaka, someone Toshio knew from his past. The pair have not seen each other for 11 years when he was sentenced, we later learn for murder. He has coming looking for work, which Toshio offers him, much to his wife’s surprise. He also offers him to move in as a lodger and in time he helps around the house with Akie learning to like him, particularly when he helps Hotaru with her harmonium playing. Yasaka confesses to Akie at what he had done and the guilt he had felt, writing regularly to the murdered man’s family. What he doesn’t tell her was that Toshio was an accomplice and escaped scott free.

When the family go with Yasaka to a picnic in the country, Yasaka and Akie are attracted to each other and begin an affair. He also tells Toshio how he feels about him being free while he was in prison. When they all return back home one day, returning from work Yasaka attempts to rape Akie. She rejects him and in his rage Yasaka assaults the couple’s 10-year-old daughter leaving her for dead with a traumatic head injury. Yasaka goes on the run. The film, now at the half way point has jumped forward 8 years. The family is now dysfunctional with Akie suffering from severe OCD and Hotaru as a virtually unresponsive quadraplegic. Toshio is now the assertive head of the family, apparently a nicer person but he still has embittered revenge on his mind.

Harmonium starts as a gentle domestic drama until it makes a dramatic turn when violence becomes very palapable in the air, even if we don’t see it. While the film starts with a slow and gentle pace it does develop into an engrossing thriller drama. It has a plot that could easily have derived from a film noir and would translate as a noir very well. The mise-en-scene of the film is well designed and thought out. The locations too are interesting, almost barren of any other life. The suburban streets are empty while we see traffic in the distance and there are no other people in the suburbs or the countryside. This reflects the loneliness of the characters in the film, that even in a marriage the characters are alone. Asano Tadanobu, who plays Yasaka has a sinister look to him that is subtle (as in the poster), always wearing a white, ironed buttoned up shirt, even in the countryside which gives him an edge. A Japanese-French co-production, the film was a winner at the Cannes Film Festival.

Extras on the disc include lengthy interviews with the films director and writer, Fukada Koji and the actor who played Toshio, Furutachi Kanji. The only other extra is the films trailer.