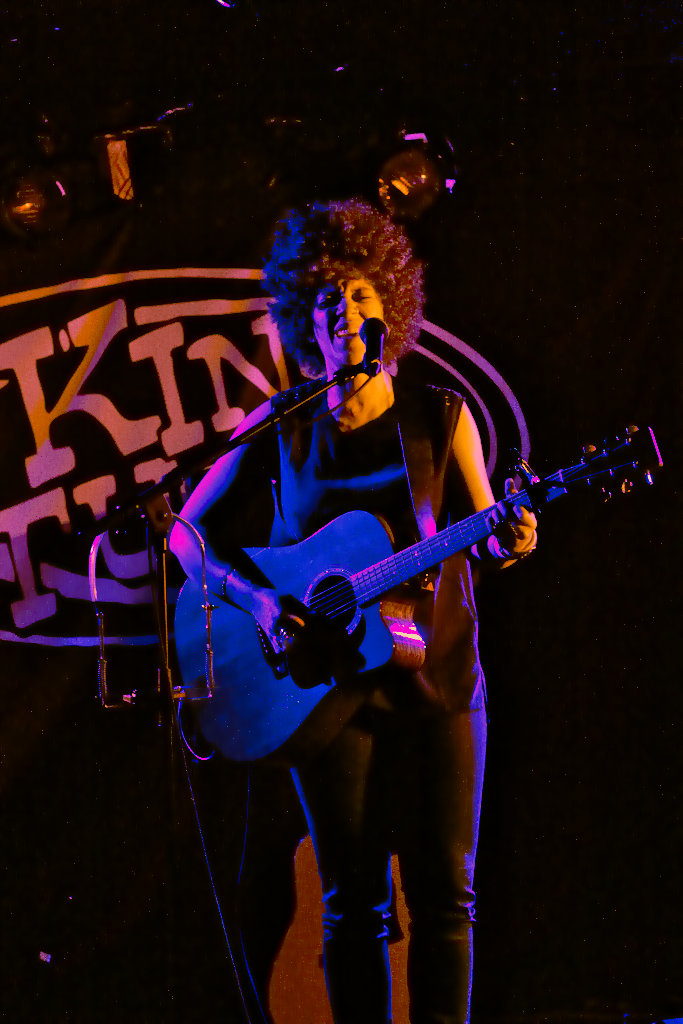 American roots singer Chastity Brown returned to Glasgow last night to play a fine set to a rather disappointingly small crowd. But Brown and guitarist Luke Enyeart still gave their all in an entertaining and highly enjoyable hour long set.

Local singer songwriter Taylor Wallace, originally from Canada but now living in Glasgow, opened the show. His solo acoustic songs showcased a strong voice with a good range. His cover of Mary Ellen Carter, an old Canadian folk song, was well received, as were several original tracks. And on You Show Me The Light he displayed some good guitar skills too.

Lanarkshire’s Amanda Bogle was next on stage, backed by Guy and Lee from the band Zulu on cajon and guitar. She seemed to have a fair few family and friends along for support, swelling the attendance noticeably. Bogle has a mellow voice and her original songs were melodic, with some good hooks. Alice and On The Side were perhaps the best of the short set, which also included a decent cover of Janis Joplin’s Call On Me.

Chastity Brown opened her set with Drive Slow, the first track on her recent album release, the excellent Silhouette Of Silence. The song is soft and passionate, before Brown’s vocals soared majestically. With Luke Enyeart adding some nice lead guitar work the song grabbed the crowd’s attention form the off.

Brown has a relaxed stage presence, introducing her songs and some of the influences, personal and political, that go into her work. She said that Lies was written after seeing the effects of the bankruptcy of Detroit on its poorer citizens. The song simmers with anger and again the vocal performance was quite superb.

Carried Away was explained as a song written after a period of deep darkness in the Minnesota winter, the strong emotions involved clearly displayed through her performance. How Could I Forget celebrates the distance Brown has travelled from her childhood in a Tennessee trailer park, but she was keen to stress that we must not forget where we have come from.

A couple of unrecorded songs featured on the set list too. The passionate Undone saw Brown giving everything, her voice straining but still note perfect. Finny’s Daughter was lively and faster paced, celebrating her Irish roots from her mother’s side. Other highlights included Lost, transformed from the album’s piano arrangement to a blues tinged acoustic song of heartbreak, and the upbeat Wake Up, which closed the set beautifully.

Chastity Brown has played in Glasgow a few times now, and this audience was untypically small. But her performance was still impressive and the acoustic arrangements of her songs allowed the space for her strong voice to shine impressively. Those who were present were treated to a fine set, full of feeling and commitment, from a very talented performer.