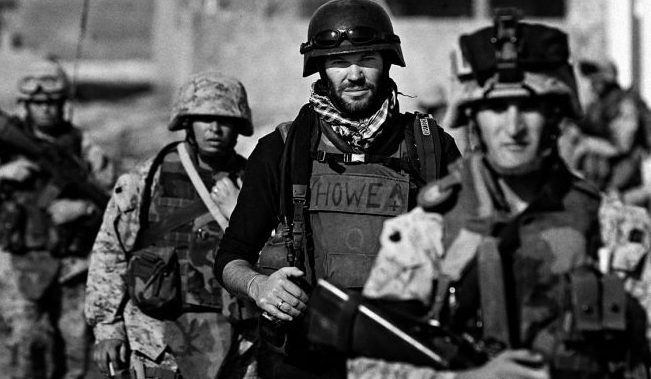 The title of Harold Monfils film is not referenced anywhere other than as a tattoo on the subject’s arm. Hoka Hey, A Good Day to Die refers to Native American Lakota warrior Crazy Horse’s cry before going into battle (“Hoka Hey” is Sioux for “let’s go”). The subject of the film is Jason P. Howe, a well known contemporary conflict photographer. The documentary opens in the Helmand Province of Afghanistan on the 11th November 2011 with Howe armed only with a camera and lenses as he is embedded with a British company who are dropped by chinook into hostile territory to clear IEDs. Howe describes the tension and adrenalin going into such a dangerous place and how in his job, clearly also identifying himself with the soldiers, is able to manage fear. He takes some superb photographs of the soldiers at work when suddenely one of the troop steps on an IED taking both his legs, or at the very least leaving them mangled beyond any possible repair. Howe continues to take photographs of the injured man as he is taken off by helicopter. This is where we may begin to ask the first questions with regards the possible moral turpitude in taking photographs of people in the most private and what may come to be their most defining moment in a person’s life.

Howe, supported by a number of other contemporary conflict journalists including Americans Eros Hoagland and Hector Emanuel goes onto candidly give his background story such as how he went from being a travel photographer to putting himself in the middle of the most dangerous zones in order to take pictures. His first assignments were in Colombia where he gained the trust of FARC rebels (Revolutionary Armed Forces of Colombia) and explains his feelings when rebels came across an abandoned coach that was connected to IEDs. The coach suddenely explodes and he sees and photographs the dead, dying and wounded for the first time. A while later, to get more of a complete picture he also became involved with different paramilitary groups elsewhere in this dangerous country. He met and fell for a village girl called Marilyn whom he later learns was a for hire assassin for a paramilitary group. Shockingly Marilyn is casual about her role as an assassin when Howe interviews her and she even offers for him to attend an assassination/murder. He respectfully and rightly declines. While in Colombia Howe became accutely aware that he did not just want to photograph lots of pictures of people with guns but to show the effect on everyday peoples lives. Later many of these photographs he shot were published in a glossy book called ‘Colombia: Between the Lines’.

Over the next few years Howe’s assignments take him back and forth between Colombia, Iraq and Afghanistan where he quickly learns the social cues, how to survive and rules for each theatre he is assigned to as a freelance journalist. He doesn’t seem to have any fixed abode during these years. Naturally he later explains that (after being badly affected by what he sees in Iraq and Lebanon) he acknowledged that he was suffering from PTSD – a common condition for many soldiers having been in conflict zones; as do his fellow war photographers. One of Howe’s, and other war photographers constant battles is the right to publish certain photographs, particularly of the dead and injured. The solider wounded in Helmand gave permission to publish the photos but the MoD didn’t, citing protection of the injured. But the real reason is the MoD fearing that this might be anti-propaganda, a stance they have maintained since the Falklands War.

War photo journalism really became established with the Vietnam War and this, as well as TV cameras highlighted the horrors of the war to the rest of the world. This is referred to in A Good Day to Die but only really to veteran Vietnam War photographer Tim Page who in many ways became a mentor to Howe and is interviewed in the film. Of course, perhaps one of the most famous of the Vietnam War photographers was Don McCullin but he is given no mention here.

All these photographers recognise that they maybe a little crazy with some kind of death wish to be doing what they’re do for a living. They live hard and play hard and any chance of a relationship is doomed. Interestingly the journalists seem less crazy for the story than the photographers and discuss the photographers and the war zones with some distance. This is a blood and guts and all documentary, quite shocking in places and I am sure there will soon be Hollywood companies looking on with keen interest. After all it has some cinematically re-created precedents if we think of Ernie Pyle’s (Burgess Meredith) embedded reporter in The Story of GI Joe (1945) as Pyle travels with the GIs from Messina to Monte Cassino in 1944, James Woods as Richard Boyle in war torn El Salvador in Oliver Stone’s Salvador (1986), Stephen Dillane as the ITN journalist Michael Nicholson caught up in the Bosnian War in Welcome to Sarajevo (1997), Mel Gibson as the journalist caught up in Indonesia in The Year of Living Dangerously (1982) and perhaps most famously of all the journalists caught up in the Cambodian genocide by Pol Pot in The Killing Fields (1984). But a dramatic film is still fantasy and a reconstruction, these guys are the real deal.