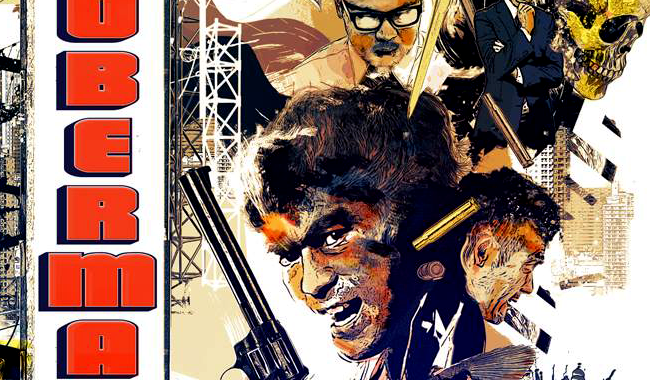 Released for the first time ever in the West, Kinji Fukasaku’s Doberman Cop (1977), is a Yakuza film and was made at a time when the cycle of such films was waning. It, like others it follows on from the cop/crime films that were being made in the USA earlier in the decade with the likes of the Clint Eastwood Dirty Harry films (that are referenced here). Fukasaku had made many of these type of films throughout the decade that began with the Battles Without Honor and Humanity series that began in 1973 (this cycle of films is also to be released next month by Arrow Video. Recently the label had also released Wolf Guy, 1975) and ended with Doberman Cop. His best known film is probably Yakuza Graveyard (1976), but by the end of the decade he had his attention to jidai-geki or historical samurai films.

Doberman Cop was adapted from a Manga graphic novel, ‘Doberman Deku’, the first such Manga novel adapted for a Fukasaku film. It is not to be underestimated how popular these graphic novels were and are in Japan. Written by Boronson, the film was adapted by Koji Takada. The story concerns a cop who arrives from the islands near Okinawa to the big city of Tokyo. His name is Jiji Kano (Shin’ichi ‘Sonny’ Chiba) and he arrives wearing a straw hat and carrying a pig under his arm and soon labelled a country bumpkin by his new tough urban inner city colleagues. Recently a girl has been murdered and her body badly charred as it had been burned. It turns that this girl had been a prostitute and Kano also discovers that she was also from somewhere near Okinawa. He wishes to take up the case but is denied. His colleagues start by mocking him for being, as they see it an ignorant country boy, naive of the city ways. The plot aso turns to a young member of a biker gang who is always in trouble with the police and is even accused of the murder of the prostitute as well as a yakuza boss who has turned his attention to his mistress, a classy singer, Miki who’s career he is trying to launch. Fukasaku also draws in police corruption into the plot.

Doberman Cop is no true classic. What it is though is a very enjoyable picture. It’s suitably tongue-in-cheek as Chiba’s Jiji Kano’s arrives on the scene with his pig from Okinawa. The scene with the pig running wild in the strip club is very funny although the film does painfully milk the scenes with the pig a little too much. As well as humour there are songs, an overflow of both glamour and sleaze as well as action, and plenty of it. This includes the sort of action that martial-arts fans loved, not to mention stunts as Chiba swings off building, chases villains on a motorbike and jumps from balconies. Dirty Harry (1971) feels present in this film as Fukasaku gives it a very Japanese feel. Like Eastwood and Don Siegel’s film the action seems to flow freely as it moves from one set piece to another.

The extras include an interview with Takada who wrote the script and his work on this film,  an interesting interview with Chiba who talks affectionately about Fukasaku, one of his great personal friends and on the films they collaborated on, as well as a tribute and story of the film by Fakasaku biographer Sadao Yamane. Chiba also recognises how films like this would be rightly influential on Quentin Tarantino.