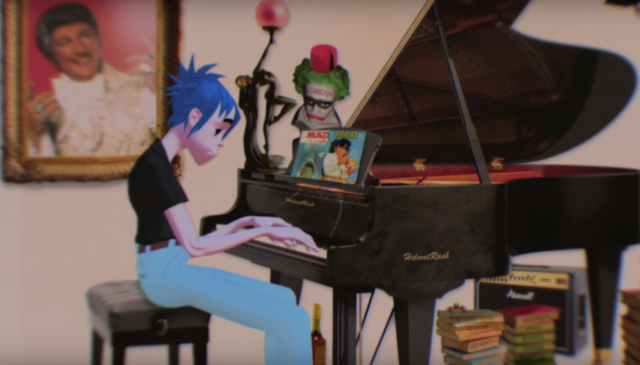 The track was initially discovered by fans, behind a pile of books in 2D’s bedroom in the Gorillaz app house he shares with bandmates Murdoc Niccals, Russel Hobbs and Noodle, and started trending immediately. The companion film for Sleeping Powder was filmed and directed by Gorillaz and features the musician at his familiar piano, enjoying a sugar buzz after eating one too many of his favourite mini fried doughnuts “that smell like heaven on earth”, ahead of the track’s debut live outing at Demon Dayz Festival in Dreamland Margate.

The “joyful apocalypse” that was Demon Dayz, the new one day festival curated by Gorillaz co-founders Damon Albarn and Jamie Hewlett, “took over the amusement park for a carnivalesque festival of great performances” (The Guardian) and featured a headline slot from Gorillaz, marking the band’s welcome return to the live stage in celebration of critically acclaimed new album Humanz. Demon Dayz sold out within minutes of the announcement and included performances from Kano, Vince Staples, Danny Brown, Popcaan, Little Simz, Kali Uchis, and Kilo Kish across three stages.

Gorillaz will return home to the UK for further live dates on the Humanz Tour later this year: