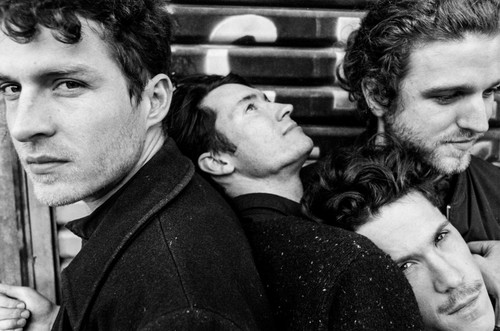 Australian label I OH YOU (DMA’s, DZ Deathrays, Violent Soho) is thrilled to announce the release of ‘Blood’ – the new single from Melbourne’s City Calm Down. The first taste of the band’s highly anticipated second album, ‘Blood’ was premiered on triple j and is out now.

In support of the single, the band have shared the official video clip, which was directed by Sydney-based Mclean Stephenson. On making the video, he says:

“With this one, I set out to play with the boundaries of a performance video. All of the FX were done via live, real-time manipulation of the feed, directly into the main camera (which was a technical nightmare). I also shot different mediums, including film, so I could vary the dynamics. I was aiming to create fast, frenetic look that built to a crescendo, thereby visually complimenting the song.”

Inspired by a standoff with a former employer, ‘Blood’ is all formidable, joyful crescendos – the push and pull of a day job versus touring commitments.

“I ended up quitting my job,” singer Jack Bourke explains. “My boss was being inflexible but I was also being self-absorbed, and the lyrics reflect that. They touch on the grind of work and how easy it is to isolate yourself from the people who matter to you by being too caught up in your own ambition and what you’re doing.

“This is a place I feel we ended up towards the end of recording the album,” he continues. “We were running late-night recording sessions during the middle of the week when we all had work the following morning, and we were all just emotionally exhausted by the end. Not to let an opportunity go to waste, we really tried to capture that sense of madness in the final chorus.”

For album #2 the band are reteaming with producer Malcolm Beasley (who helmed their debut). The meticulous ‘In A Restless House’ spawned singles ‘Son’, ‘Rabbit Run’, ‘Wandering’, ‘Your Fix’ and ‘Border On Control’, earning over 3 million streams on Spotify and scoring high rotation across triple j, Beats 1, and other national radio. Accolades from internationals such as NME, Stereogum, Consequence of Sound, Indie Shuffle and more; sell out national tour and support to Bombay Bicycle Club, alt-J and CHVRCHES. Now, after months of solid work, it’s time for City Calm Down to reveal their next step.

“The new record feels like a natural progression from ‘In A Restless House'” explains Bourke. “There are songs that expand on the themes and songwriting present on that record, and there are songs that mark a clear departure. It also feels much more cohesive… which is probably due to us having a clearer idea of how we wanted the songs to sound before we went into the studio.”