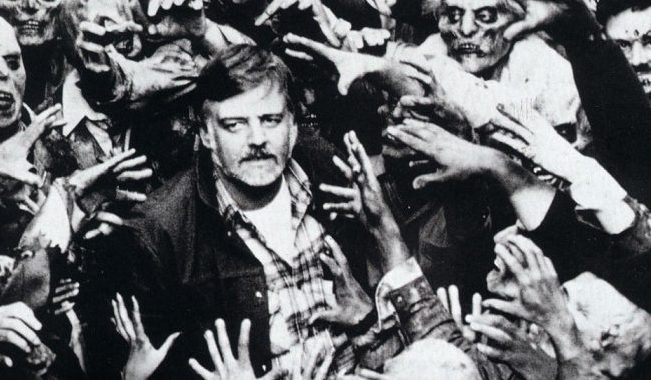 Horror movie fans were shocked to hear of the death of director George A. Romero at the age of 77. Not such a surprise that a 77-year-old dies, the shock being more to do with how relevant Romero still is and the long shadow he casts over the horror genre and especially the zombie sub-genre. My own introduction to Romero was not one of his zombie films but a late night BBC2 screening in the early 1980s of The Crazies (1973). The Crazies, as with many of his early films is set in around the town he settled in as a student, Pittsburgh and its environs. The film is about a biological release of a toxic chemical release belonging to the military turning those infected into mad ‘crazies’. Survivors are corralled aggressively by the military dressed in white hazmat outfits complete with gas masks and guns making them sinister agents of terror. A handful of survivors try and defend themselves from both the ‘crazies’ and the military. There is a consistency here with the plot of his zombie films; in fact he just stops short of making this into a zombie film.

Romero was born in The Bronx, New York in 1940 to a Cuban-Spanish father and Lithuanian-American mother. As a student he went to university in Pittsburgh. After graduating in 1960 Romero spent the next few years making short films until he made his ground breaking horror film, Night of the Living Dead in 1968. It is hard to underestimate how this film revolutionised the horror film and with this the modern zombie film was born. Again, as with his later The Crazies Romero’s signature film followed a similar story of a pandemic that turns people into slow, lumbering flesh eating zombies with a handful of survivors holding out. Filmed in black and white with a cast of amateurs and a budget of just $114,000 the film soon became a cult success.

It took several years before Romero was able to duplicate the success of Night of the Living Dead. He did make a minor cult hit, Martin (1977) about a man who is a vampire living in modern day Pittsburgh and addicted to blood. But it was his next film, Dawn of the Dead (1978) that became Romero’s next big success. It beat Night of the Living Dead, benefitted from a bigger budget and once again re-affirmed the director as the mover and shaker in the horror genre. This time the survivors are holed up in a mall. He claimed that the origins of this film was just by observing people in a mall and the way they were not interacting in the world. I think we can all relate to this. There is one line in which the main character echoes: “Some kind of instinct. Memory of what they used to do. This was an important place in their lives.” Of course this film was successfully remade in 2004.

Again, over the next few years Romero failed to repeat this success making such relative duds as Knightriders (1981) before having another success with Creepshow (1982), a portmanteau film with short stories scripted by Stephen King. But it was always the zombie films that brought him success and this pattern did not change with the next zombie film, Day of the Dead (1985), even gorier than his previous efforts. Naturally there were further zombie sequels with Land of the Dead (2005) which co-starred Dennis Hopper, the underrated Diary of the Dead (2006) and finally Survival of the Dead (2009). He was also critical on the more action filled zombie films such as World War Z (2013) in which the infection took over very quickly turning the living dead into fast running and strong flesh eaters. He always felt that their slow lumbered gait and the deadness behind the eyes were the key to their success.

In 2009 Romero became a Canadian citizen and lived in Toronto with his third wife, Suzanne Desrocher who he married just in 2011 having met while filming Land of the Dead. There has been talk of him directing a zombie mini-series and remaking Dario Argento’s films with the blessing of Argento’s family. This is testament to the legacy of Romero and what an impression he has had on the horror genre. There are so many zombie films made these days and all of them have the impression of George Romero all over them. Such zombie parodies as Shaun of the Dead (2004) and Warm Bodies (2013) continue to testify to this.

George A. Romero is survived by his third wife, Suzanne, and by his three children, Tina, Andrew and Cameron.