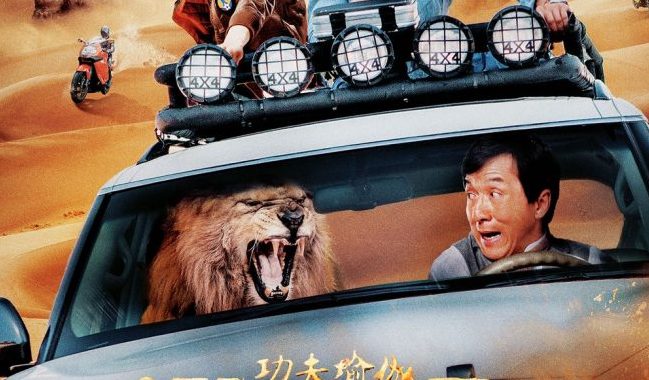 It is no surprise that Bollywood and Martial Arts action films in South East Asian cinema are the most popular national cinemas globally. Natural then the action of South East Asian cinema and the glamour and colour of do-called Bollywood cinema should meet in an Indian-Chinese co-production. The glamour is there as is the non-stop action. What could possibly go wrong? Yet, despite a huge budget thrown at the film (a reported $65 million) and multiple locations the result is a very silly film needed.

Kung Fu Yoga (the Mandarin title is Gong fu yu jia) was shot in multiple locations around the world: Beijing, Iceland (which doubles for Tibet), Dubai and Rajasthan. The story opens with a prologue about a missing treasure trove and the story of the Teracotta warriors. The main character is a renowned Chinese architect called Jack (Jackie Chan). She meets and teams up with a beautiful young Indian architect, Asmita (newcomer Disha Patani) who asks him for help to find the missing Magadha horde. Between their research takes them to an underground lake, under a glacier. There Jack, Ashmita and their friends find the treasure including a chest full of gold coins and a rare gem. There they are attacked by Randall (played by popular Bollywood star Sonu Sood) and his men. Randall claims that the treasure was taken from his family a few hundred years ago and that Asmita’s family had stolen it from them. Randall fails to take the gem and leave the friends for dead. Jack’s understudy, Jones (Aarif Rahman) What Randall didn’t count on was that Jack and his friends were martial arts experts who can more than adequately defend themselves. Once they escape, their chase takes the friends to Dubai where Jones is planning to sell the jewel in an auction. Randall is determined to outbid for the jewel or steal it, either way he wants it.

The film is, as the title suggests an Indian spiritual martial arts film with a Raiders of the Lost Ark kind of adventure story thrown in. Even more than Raiders there are some very funny what did I just see? moments. Quirkiest of all is the car chase scene in Dubai that equals anything in the Fast and Furious films where Jack is chasing Randall’s Ferrari in a high speed chase. To add to Jack’s problems, unbeknownst to him he takes a car at the Dubai hotel has a lion in the backseat. Needless to say that this is a CGI lion and at times some of the CGI is a little obvious but this scene does provide the film with its signature moment. The humour is cringingly bad, but the action is well handled and suitably over the top even if the heroines in the film are reduced to squealing women trying to run in high-heels and helpless in the action scenes, reducing them to the weaker sex.

Primarily it would not surprise anyone that essentially this is a Jackie Chan film, despite the Bollywood stars. Released in Asia earlier this year, set for digital download in the UK and a DVD release later in the year, it would not surprise that it has done better in Asia than it’d be expected to do in the West. Flash popcorn stuff.