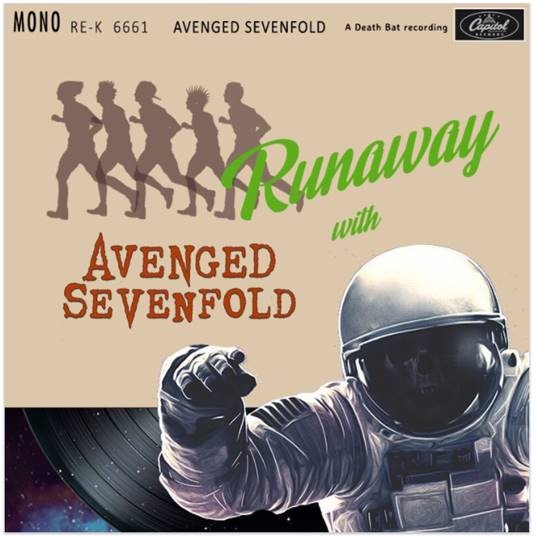 “When we decided to expand the album and add new tracks, everyone in the band chose a song that would be interesting to cover,” says Avenged Sevenfold vocalist M. Shadows. “Zacky came up with the idea of doing a punk rock version of the Del Shannon classic. While in the studio, Synyster brought up our old friend Warren Fitzgerald, saying it’d be great to have him play on the track and give the song the kind of reckless abandon he’s known for with The Vandals. With Warren on board, Zacky wanted to have a crack at singing, which really put the song over the top. I do a little talking thing with him in the middle of the track, but that’s it. The rest is all him and it came out great.”

“I’ve always loved ‘Runaway’ and the dark undertone hidden behind the upbeat doo wop track,” says Zacky. “You can hear sincere anguish in his voice. I raised my hand to add a little punk rock flair to the vocals, have some fun, and give the fans a little something to talk about.”

Adds Fitzgerald, “I’ve known the Avenged Sevenfold guys for years and obviously Brooks [Wackerman, A7X drummer] played with The Vandals, and our bands are both from Huntington Beach, so the ties run deep. But I was still surprised and honored that they asked me to play on the track. I think it’s a really cool choice for a cover and the guys were very generous in the studio. They’re all incredible musicians and to have them say, ‘do what you do,’ was really flattering. So I did, and we had a blast, and I’m tickled to death with how it all turned out.”

“Runaway,” which marks the first Avenged Sevenfold recording featuring someone other than M. Shadows on lead vocals, follows the band’s rendition of Mexican folk song “Malagueña Salerosa,” a reimagining of Mr. Bungle’s “Retrovertigo,” and original track “Dose.” The latter saw them teaming with mobile game developer/publisher Gameloft for a sneak preview of the song as a special level in “Dungeon Hunter 5,” the latest episode of the successful hack and slash series.

THE STAGE is the band’s 7th studio album and first for Capitol Records. Co-produced by A7X and Barresi, it is a work of immense scope and ambition, featuring 11 panoramic tracks tied together by an Artificial Intelligence theme. Inspired by the writings of Carl Sagan and Elon Musk, the album is the band’s first thematic release. Its epic 15-minute-plus closing track, “Exist,” features a guest appearance by award-winning astrophysicist Neil deGrasse Tyson giving a spoken word performance he penned specifically for the album. Guitar World, who spotlighted Gates and Zacky Vengeance with a cover story, lauded the disc for being “the most surprising and ambitious album of their career.”The Guardian and NME each gave it four stars, with the latter calling the album “their best yet,” adding that “they’ve truly arrived.” Q called it the group’s “boldest album yet” and Classic Rock called it “a metal masterpiece.” Avenged Sevenfold recently released a video for a second album track, “God Damn,” which already has 3.3 million views. The album hit No. 1 on Billboard’s Rock, Hard Rock and Alternative Albums charts, No. 4 on the Top 200 and debuted Top 5 on iTunes in over 35 countries. Its title track hit Top 5 at rock radio and its companion video has amassed over 18 million YouTube views to date.