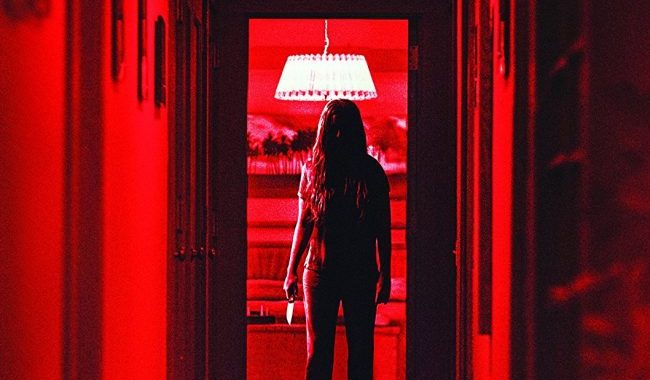 Wolves at the Door opens and tells us the film is set in August 1969. Ping! Ah, okay this is ‘inspired’ by the Charles Manson Family murders which took place on the night of 8th August 1969. The prologue to the film is fairly effective as a couple get ready for bed when they hear and see intruders enter their house. They call the police but sense the intruders getting closer and tormenting their middle-class victims. The police arrive in time but the home invaders have left having scrawled and graffitied the words “Pigs” on the walls. This was a Manson Family trait as they believed that there were messages for revolution in The Beatles White Album (there is a song on it called ‘Piggies’).

We then get to the main meat of the film and the famed Sharon Tate murders. Prior to this infamous crime the Manson Family had already committed to a couple of other murders, yet this film doesn’t mention Charles Manson or any of his Family. Nor does it mention Roman Polanski, the wife of one of the victims, actress Sharon Tate. Despite being told at the films open that it was inspired by the events of 8th August 1969 it never the less concludes with a statement by Manson in black and white footage and stills and an explanation of those murdered and the perpetrators. (It also says that this is the Summer of Love, which was actually 1967.) It also makes no effort to hide the names of the victims. At the time Sharon Tate was murdered she was 8 months pregnant and Wolves at the Door makes exploitative mileage of this fact. The way the story is told is that on the fateful evening the four people in the house were preparing for dinner and an evening in. Sharon (Katie Cassidy) talks about her anxiety about being an expectant mother and confides in Abigail (Elizabeth Henstridge). Also in the house are Wojciech (Adam Campbell) and Jay (Miles Fisher). Living in the lodge house at the bottom of the garden is William (Spencer Daniels), a stoner who is so busy listening to his music and getting stoned that he doesn’t hear anything.

The home intrusion comes slowly as Abigail is in the kitchen and sees a shadowy figure move across the hallway. She pursues but can’t find the female intruder who had waved at her. And so the slow torment and eventual murder of the victims begins. As on the cover of the DVD case the perpetrators are only ever seen as shadowy figures or as a pair of feet and we never get a full view of them adding an extra horror dimension to the film. The murders are for the most part accurate to the story such as the murder of Wojciech as he lies resting on the sofa. Elsewhere, the film really milks the horror such as shots of a sledgehammer being dragged along the driveway.

There is little sense in the film that this is the 1960s. Hearing Tommy Shondell’s ‘Crimson and Clover’ or The Zombies’ ‘Time of the Season’ alone does not alone give the film a 60s ‘look’. Cassidy’s Tate looks more 21st century than Tate’s very 60s beautiful look. The Manson Family were the dark side of the 1960s and very endemic of that dark side as the drug fueled madness of the hippie dream took a dark turn. Of course the Manson Family also had a counter-culture link to the music of the time as the previously mentioned Beatles White Album and Family members knowing Beach Boy Dennis Wilson who lived nearby Cielo Drive where the murders took place. Unfortunate, therefore, that this film could not either be a straight home invasion horror (really only inspired by the Manson killings) lost in all the other similar such torture porn or a proper re-telling of that terrible night.

Released by Warner Home Video this is a bare bones release with no extras.