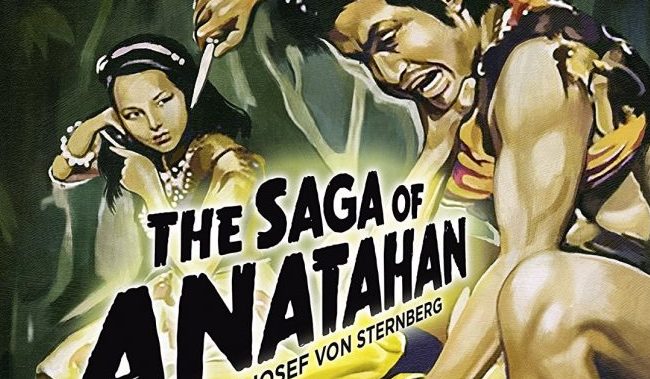 In June 1951 a group of Japanese soldiers surrendered to the US Navy having not realised that the war had been over. They had been there since 1944 when they fled to the interior before the Americans left the island. The story of these Japanese soldiers made international headlines and had lived and survived alone on the island with one native woman from the island. The island itself is a small volcanic overgrown island and a part of the Mariarna Islands sitting on top of the Mariarna Trench, the deepest part of any ocean in the world and, as the prologue tells us on a map it looks like a thousand scattered crumbs. It is near Guam which apparently is currently in North Korea’s firing line. Veteran German and then Hollywood film director Josef von Sternberg was fascinated by the story and went on to make The Saga From Anatahan from his own funds in Japanese with a voiced over narration by himself. This would prove to be von Sterberg’s final film.

The film with a narration (in English) all the way through and in the early scenes we are introduced to the crew of a Japanese merchant ship with 12 semen on board who are forced to abandon the ship when it is bombed by an American plane. They swim to the nearby island of the title, Anatahan where they find a not too friendly plantation farmer and more significantly a young woman, Keiko (Akemi Negishi. She would go on to act in a number of Akira Kurosawa’s films). Time passes, the war has come and gone, the bomb is dropped on Hiroshima and Nagasaki but these events pass these survivors by. Year after year the survivors get drunk and each of them try to seduce Keiko and presume dominance by living in the (Tarzan like) tree house with a couple of found pistols. A King and Queen of the castle if you like. But this position of being with Keiko puts everyone in danger in their battle for survival. And here we see a typical von Sternberg trope of the way man changes when he lusts after women.

Von Sternberg was a master of emotion from visual expression and body language. That gift as an artist and director is not lost in this film either. He could not speak Japanese, nor could his cast speak English. The director would communicate the film to them through storyboards and eve a flow chart showing each character’s relationship with Keiko. Yet the American accented narration struggles to carry the film on its own with minimal dialogue from the actors. He focuses mostly on the relationships, less between the men and more the jealousies from those pursuing Keiko and less on the struggle of survival that runs through say Daniel Defoe’s ‘Robinson Crusoe’.

Based off the novel by Michiro Maruyama from his own memoir, needless to say that von Sternberg altered the facts. For example in the real story there were 30 survivors from the ship and 45 natives of the island; they also lived in a number of communities around the island rather than in one tightly knit community. The lone woman is also amazingly true, but her name was changed from the real-life Kazuko Higa to Keiko. This is an all lilklihood what attracted the director to the film.

The film will mostly attract von Sternberg completists. His career from the classic prison drama Underworld (1927) through to his remarkable films with Marlene Dietrich mark the best of von Sternberg. After he made his last film with her, The Devil is a Woman in 1935 and the unfinished Roman epic, I, Claudius (1937) his films were patchy and unremarkable at best. For this, his final film it is clear that the director has returned to familiar themes gives an idea that this was a rare project von Sternberg wanted to work and that is clearly reflected in the number of extras on the disc. Yet, it’s very low budget and that everything is set bound and obviously so, displays the films limitations. Because of this The Saga of Anatahan is not von Sternberg’s Tabu (1931), that also happened to be F. W. Murnau’s last film. The extras on the disc includes a lengthy study of the film by Asian film historian Tony Rayns, a typically wonderful and poetic visual essay by Tag Gallagher and an interview with von Sternberg’s son, Nicolas. Elsewhere there is also original footage of the Japanese after they were lifted from Anatahan. The film shows a lot of nudity for its date and of course faced cuts so, as well as the cut version of the film there is also a scene comparison of the censored and the director’s cut version.