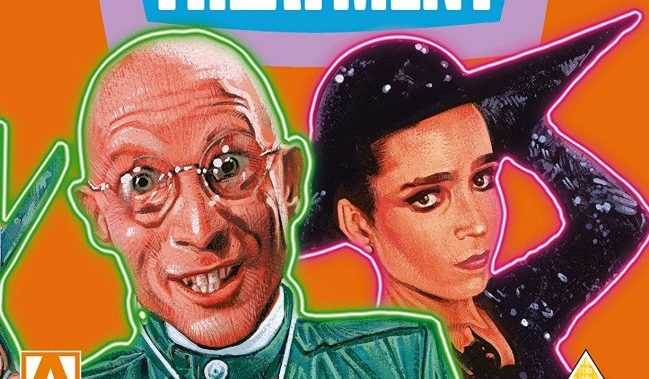 “It’s not a sequel… it’s not a prequel… it’s an equal…” – so ran the ad marketing campaign for Shock Treatment (1981), the much anticipated follow-up to that giant cult success, The Rocky Horror Picture Show (1975). Shock Treatment had a lot to live up to and the creators of both knew it. Once again written, starring and co-music writer Richard O’Brien, although aware this was going to be a tough one, had trouble getting director Jim Sharman back on board. He was eventually persuaded to go for it, but only after O’Brien made massive changes and did not try to emulate or repeat Rocky Horror. With Tim Curry not wanting to get on board and return as a Frank-N-Furter character or a return of the Rocky character, a fresh look was required. In fact there were both many similarities and many differences. The characters of Brad and Janet returned, but this time were played by Cliff de Young and Jessica Harper, rather than Barry Bostwick and Susan Sarandon. O’Brien and the eccentric Patricia Quinn returned, but in different roles, with O’Brien looking less like a hunchbacked Brian Eno as he did in Rocky Horror and more an egg-headed, bottle top glasses wearing mad scientist with a penchant for dressing in women’s clothes; sinister, but in a different way. Many others returned, also in different roles and these would of course be identified by the legion of Rocky Horror fans.

O’Brien and Sharman had big ideas and ambitions for Shock Treatment. They wanted to give a Midwest flavour to the setting and the songs. Once again set in Denton, the production company went and did a recce to Denton, Texas, just north of Dallas, but due to a union strike and budget limitations they were forced to film entirely within the studio in the UK with the result only giving a very stylised impression of living in Denton. This of course changed the look and story of Shock Treatment. The final story once again returned to Brad (de Young) and Janet (Harper) as they attend a local TV station in Denton and appear on the show ‘Marriage Maze’, representing the model good Christian married couple. The show is hosted by the creepy and sleazy Bert Schnick (played by famous Australian Barry Humphreys, better known as Dame Edna Everidge). On this show and others, Brad and Janet are seduced into the consumerist world of television. What is more, Janet receives the lecherous attentions of fast food tycoon, Farley Flavors (also played by de Young). He conspires with a pair of eccentric psychiatrists, Cosmo and Nation McKinley (Eno and Quinn) who put Brad in an asylum. Meanwhile, Janet is moulded into a vixen, while the cast of characters are frenetically whisked into a world of reality TV.

Shock Treatment is not as good as The Rocky Horror Picture Show and for many of its fans was often very confusing as it moved away from the original film’s camp horror background. The camp is retained and the film is ahead of its time in it’s deconstruction of reality TV before reality TV became a thing. Even the cast and crew though were unclear what is going on. It was widely reported that Harper and Charles Gray (again returning from Rocky Horror, but this time not as the psychoanalyst narrator) among others, would often whisper to each other, “psst, do you know what’s going on?” “No”, the reply would come. Unfortunately, it does at time look as though they are playing along, unaware of what was going on. The sets are overly stylised, which works less well in it’s favour than in the first film and, dare I say it looks very 1980s and at times very much like a now dated pop video. The film does include some early appearances by such 80s icons as a young Rik Mayall and Ruby Wax.

I know ‘Time Warp’ is an undisputed classic but, controvertially I would say that the songs in Shock Treatment are better than in Rocky Horror. These songs included the title song, ‘Bitchin’ in the Kitchen’, ‘Lullaby’, ‘Me of Me’ and the camp ‘Little Black Dress’. Shock Treatment was not well received on its release and was even condemned along with other 1980s musical duds as Can’t Stop the Music and the decidedly odd Xanadu (both 1980), but over the last couple of years it has started to achieve some cult status since a successful 2014 stage productio, and after all it did take some time for ‘The Rocky Horror Show’ to become successful, but then again it takes more than a few decent songs to create a cult winner. Far from being an equal then.

As ever with Arrow Video the Blu-ray will be released with both the ‘Cosmo’ and ‘Nation’ cover art as limited editions with the usual exhaustive number of extras now expected on an Arrow release. As well as commentaries by Quinn and Nell Campbell, who plays the nurse, extras includes a whole bunch of featurettes including a funny Q & A between Mark Kermode and eccentric Quinn, fan featurettes and many behind the scenes and making of documentaries. Not to mention the CD of songs to sing along to. Bitchin’ in the Kitchen indeed.