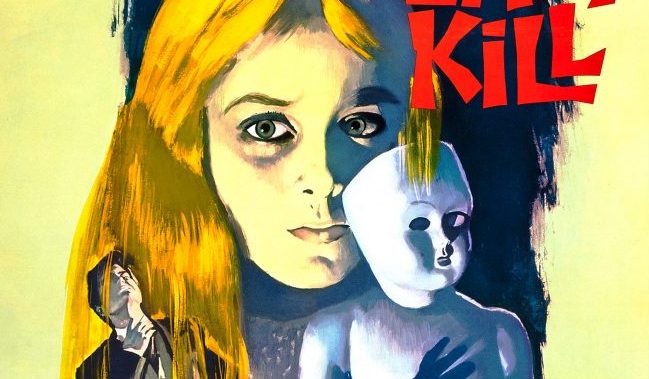 The opening scene of the latest release on Arrow Video, Kill, Baby… Kill! (1966) has an opening scene that has the look of a Hammer film, more familiar to many in the UK than this Mario Bava film. We see a young woman in a late 19th century/early 20th century country dress running in a twilight sky, chased by something unseen who makes her way into an old crumbling villa. The trees bow in the wind as she runs across a sky in a shot very similar to the dance of death scene from Ingmar Bergman’s The Seventh Seal (1957). The woman suddenely stumbles and falls from a window, ending impaled on a fence. A very gothic scene.

Kill, Baby… Kill! is set at the start of the 20th Century in a Carpathian village (where all good Gothic horrors are set). A young doctor, Dr. Paul Eswai (Giacomo Rossi Stuart) arrives at the village to carry out an autopsy on the young woman who has died at the films prologue. During the autopsy he finds a silver coin that has been embedded in the dead woman’s heart, relating to a saying by the locals. Paul believes that witchcraft is at play here and learns of a local witch called Ruth (Fabienne Dali) who uses superstition to ‘help’ the frightened locals. The doctor is staying at the local inn when the daughter of the innkeeper is chased and frightened by the ghost of a dead child. The girl is taken to her bed where she is ‘protected’ by Ruth and even flagellated by sage brush and wrapped in hawthorne. The doctor believes that all this is superstition until he receives a visitation by the ghost himself. On investigation the ghost of this pale, blonde anemic 8-year-old girl in a white dress carrying a ball is girl who’s death was partly the fault of the villagers and is killing them for revenge. The ghost child (actually acted by a boy) is truly scary and the scenes in which she appears at the window truly memorable.

The story of Kill, Baby… Kill! is unusual and has many similarities to Hammer, and for that matter the Universal horror films from the 1930s – 1940s. But it also has many departures. Hammer’s gothic horror films mostly featured some monster or other or else it’s lesser well known films might be psychological thrillers. It never really ventured into the ghost story territory that Bava’s film does, nor did thet have the child the central ‘monster’. These days, we

are more familiar with the child/ghost story horror with the likes of the J-Horror films that came out of Japan in the late 1990s and the noughties, as well as earlier precedents such as, of course, The Exorcist (1973) and it’s many other interpretations and incarnations. Yet, Kill, Baby, Kill has closer ties to Henry James, whose novel, ‘The Turn of the Screw’ had been adapted in the brilliant The Innocents (1961), the Victorian ghost story of a sexually repressed governess looking after a couple of odd children. But there also the usual gothic Hammer horror types: an innkeeper, young virginal girls, a bland young male hero, gravediggers and a Mrs Haversham type widow. The mise-en-scene of the sets too are similar to the earlier Hammer films. But much of the film is shot on location in the medieval old town of Faleria, north of Rome. It is shot, mostly at night to great effect, with the director using his trademark garish colour gels to good and artistic effect. The film was released in Italy under the title, Operazione Paura (which literally translated as Operation Fear) and in (West) Germany under the even more laughable exploitative title, Die toten Augen des Dr. Dracula.
Bava was, by 1966 distinguishing himself as a director of horror films. He had, of course come to the attention of the world with the black and white gothic horror, Black Sunday in 1960. In 1963 he made the portmanteau horror piece, Black Sabbath. In one of the story’s within, ‘The Wurdalak’, Bava again provided some gothic chills with Boris Karloff even making an appearance. Kill, Baby… Kill! is the director’s most gothic and Hammer-like piece, but as already seen made a number of clear departures. Where he went beyond the Hammer factory and identity is with his subject and the vivid colours and rapid, almost eccentric movements of the camera. What is more, there are more genuine scares and chills than in any Hammer film, as much as the style of the British counterparts is universally loved. May Bava’s reputation endure on.
The film looks superb on this 2K transfer by Arrow Video, while extras on the disc hit the spot just right. There is a fascinating visual essay by Kat Ellinger who traces the films precedents and influences, a location guide to the shoot by Bava’s son, Lamberto Bava, who was assitant director on the film, an interview with the heroine, Erika Blanc and a commentary by the author of the book, ‘Mario Bava: All the Colours of the Dark’, Tim Lucas.
Chris Hick
Share
Tweet
Pin
0 Shares