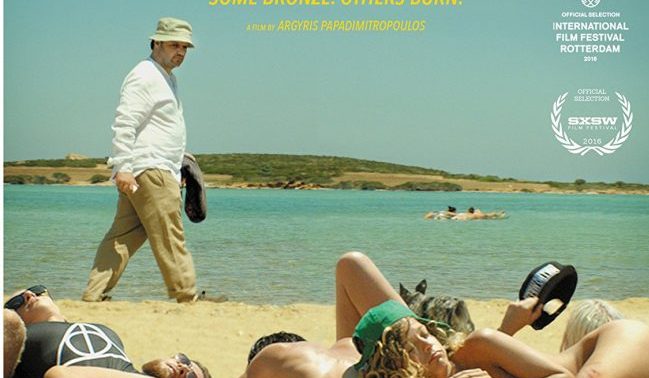 The last rays of the Summer sun are on the horizon, so why not take in a film set on a Greek island called Suntan (2016) and recall a sunny escape from reality (for those lucky to have been able to). Although the film bears no relation to Josef von Sternberg’s The Blue Angel (1930), either in time, location or society, but never the less that films story of a university professor, Immanuel Rath becoming obsessed and led along by cabaret singer Lola Lola (played by Marlene Dietrich) until he is literally made into a clown as well as a cuckold. The central character of Suntan is Kostis (Makis Papadimitriou), a doctor who arrives on the small holiday island of Antiparos with his suitcase at Christmas time (during the off-season) in advance of the busy Summer period. Kostis is an overweight balding middle-aged man and is shown around the island by the local mayor. He lives frugally in his small flat and drinks with some of the locals, including a vulgar guy who wastes no time in advising him of the availability of “pussy”. Although we don’t get any background to Kostis we get the impression that he is something of a loner and awkward in the company of women.

Once the season commences early on he treats a young Greek woman, Anna (Elli Tringou) who has injured herself after coming off a rented motorbike. Anna is gently flirting with Kostis which he coyly responds to, even when her friends are being disruptive in the room and he is trying to push them out. A short while later Kostis makes his way to the beach where he sees Anna and her other 20-something friends, bronzed and naked frolicking and relaxing on the beach. By contrast Kostis is fully dressed and when strips to his shorts, his hairy white body while covering himself with thick greasy white suntan lotion. Soon Anna and her friends let him into their group. He plays with them, gets drunk and has fun with them at nightclubs. There is the impression that Kostis is amusing them and this is not going to last long once the novelty has worn off. In one scene he kisses Anna and then her male friend goes to kiss him which he rejects. She tells him, “kiss everyone, or no one”. Their hippy free love behaviour is their culture, during their holiday on this hedonistic island at least. Inevitably Kostis does have a personal sexual encounter with Anna (for a few seconds at any rate), but equally inevitably she begins to find him clingy, verging on obsessive.

Suntan builds to a tense conclusion and once he is rejected there is an air of danger in his downfall, Of course he puts himself and others at risk in the neglect of his responsibilities as a doctor and his pride is soon washed away. The film spends a good deal of time (at the beach anyway) contrasting Kostis’s body with the naked physicality of those of the young hedonists. There is little erotic in they way their bodies are displayed, except in one scene in which Kostis and Anna are waist deep in the sea. When Anna does a hand stand in the water her genitals are central to the screen, which of course draws Kostis’s eyes in. The performance by Papadimitriou as Kostis is good and shows no pathos but instead a mixture of being self-conscious without a lack of self awareness as to what he is getting himself in to. His collapse is not sudden but happens in time, much like that of Professor Rath in The Blue Angel.

The location of the film could be any one of the wonderful Greek islands, but is specifically Antiparos, an island familiar and regularly visited by director, Argyris Papadimitropoulos, who states on an extra on the disc that he had visited the island regularly since he was 16-years-old and clearly stories he had heard and behaviours he had observed on the island formed a basis to the film as well as his own consciousness at getting older. The picture quality of the film, released by Montage Pictures through Eureka Entertainment is superb, is sharp and very textured. Extras on the disc include an interview with Papadimitropoulos and a Making Of featurette.