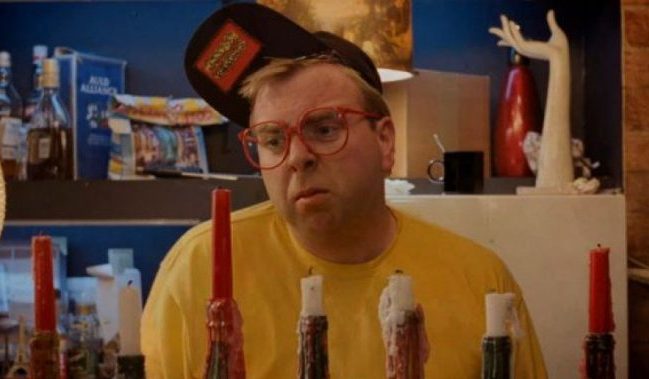 It’s interesting to compare the films of Mike Leigh with Ken Loach and their respective views of class; working-class in relation to Loach and the lower middle-class with Leigh. There are as many things the two directors have in common as there are that separate them. BFI are releasing Leigh’s Life is Sweet (1990) the same date they are also releasing Three Films by Ken Loach: Riff-Raff (1991), Raining Stones (1993) and Ladybird Ladybird (1994). There is a great deal of humour in both director’s film, maybe a litle more with Leigh, but what they do have in common is wonderful social observation. Some writers have also observed that in Leigh’s case he is slightly mocking his characters, but then brings it round with at least one great outburst of well targeted anger in his films. In one scene towards the end an example of this is bought to the fore, highlighting Steadman’s acting abilities as she frustratingly admonishes Nicola for not recognising she has a problem.

Life is Sweet is set over a few days one summer in the North London suburb of Enfield. Opening with the credits we are introduced to Wendy (Alison Steadman) as she teaches a children’s dance class while the annoyingly joyful tune, ‘Happy Holidays’ plays. We then meet the rest of the family, equally happy-go-lucky husband Andy (Jim Broadbent) and their twin daughters, tomboy Natalie (Claire Skinner), who works as a plumber’s mate and the out of work messed-up and fidgety proto-feminist Nicola (Jane Horrocks). Andy is invited out for drinks with his dodgy dealing mate Patsy (Stephen Rea) who cons Andy into buying a rundown and trashy burger van. Andy is an eternal dreamer and opportunist who wants to get away from his job as a chef that he hates. He also considers himself a DIY enthusiast, but leaves all his jobs unfinished (the walls of the hallway landing have been stripped of wallpaper but at no point has there been any wallpapering done). Meanwhile, another friend, Aubrey (Timothy Spall) comes over to show them his new restaurant venture that he is preparing to open, although he has done zero promotion. Andy and Wendy go over but don’t aren’t hopeful that he will do well.

As can be surmised from the above summarised synopsis, not a great deal happens in the film, but what a brilliant, funny and slightly tragic family character study this is. On one of the extras on the disc Horrocks explains the process Leigh used in preparing the characters. Each actor described people they knew and these would form the basis for their own character in the film, including Horrocks’ Nicola, as exaggurated as she might seem. Steadman and Broadbent are both wonderful, with a quirky naturalness, but not in the same way that Loach’s character would be with their silly laughs at double-entendres and their funny character voices.

Food is central to the theme of the film from the title to the candy colored credits, suggesting a sugary sweet taste. Within the film Andy is employed as a chef in a large kitchen and wants to run a burger van as his business; Aubrey tries to open his restaurant The Regrette Rien (under the restaurant sign it tells us it is Tres Exclusive), a restaurant that caters for nouveau riche cuisine in Enfield (he also brings a pineapple over to the family as a gift) and daughter Nicola is bolemic, eating chocolate late at night to make her sick. She also has a perversion with her boyfriend (David Thewliss), in which she likes him to tie her up and lick chocolate off her. Yet life is not always sweet in this film. We see people both happy with their lot while at the same time quietly dissatisfied and not able to break out of their rut. Gently aided by Rachel Portman’s beautifully waltzy score, the film is both funny and sad with many dark elements, not least of all Aubrey’s kidult, slightly disturbing misogony and weird pecadilloes, such as his bizarre dress sense (even for the 1980s).

Not its intention on the films release, but Life is Sweet also acts as a time capsule and has grown over the years, as it portrays that time of late Thatcherist Britain and continues to endure and, hopefully find a new audience. The picture quality looks superb on this BFI release with a host of extras including an interview with Horrocks, a Guardian Lecture interview between Leigh and film critic, Derek Malcolm, as well as Leigh’s commentary on the film. The most significant extra is the short film, A Running Jump, made by Leigh in time for the 2012 London Olympics. This short follows a working class family’s hectic life, including a taxi grandfather (Sam Kelly) and his dodgy car salesman son (Eddie Marsan). As interesting as it is, next to Life is Sweet it sadly doesn’t hold a candle.