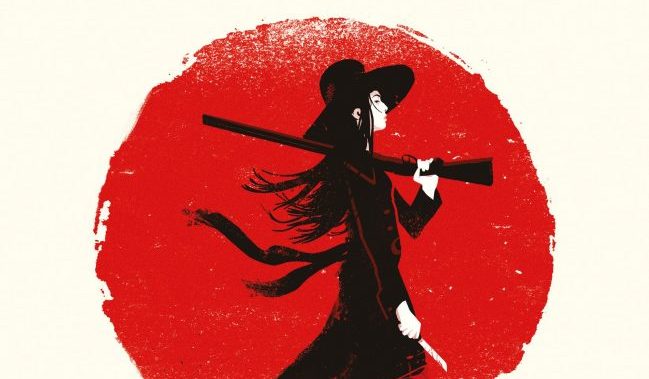 With a handful of films in the early 1970s Meiko Kaji was Japan’s greatest female action star. Scratch that, she is arguably the foremost female action star. Period. Her petite frame, model good looks and stylish looking, long flowing hair belie this. Not only that, she enjoyed later fame thanks to Quentin Tarantino’s Kill Bill as Uma Thurman referencing Kaji as she slashes her samurai sword around knocking out the villains. In interviews some critics were also quick to see how the revenge plot and some scenes bore more than a passing resemblance to the Lady Snowblood with one fight sequence in a snowy twilight garden. Now released by Arrow Books in their book arm this publication perfectly pitches the action star with a fine balance between a well illustrated book with lots of glossy stills and good coverage of her career without going into too much detail.

Meiko Kaji began her career as a teenager in the 1960s working for the Nikkatsu Studio, a studio she would stay with for several years, making a series of youth movies. It wasn’t until she appeared in the quirky and eccentric martial-arts film, Blind Woman’s Curse (1970) in which she played a tattooed member of a female clan that she was really recognised as an (unlikely) action star. By 1971 Nikkatsu was moving into what were known as pink films, that is films in which nudity played a part that she fell out with the studio and moved to Toei. She was not wholesale against nudity, so long as it was particular and relevant to the role. For even though Kaji became an action star she also wanted to be recognised as a serious actress. Before leaving the studio she starred in the exploitation series of films that were known as Stray Cat Rock. Kaji starred in (different) roles in four of the five films. These were a female Japanese version of the 1950s type of youth exploitation film, with Kaji playing a different character in each film and often came to a sticky end. It was after these films that Kaji moved to Toei and made the first of another series of films she would undertake, the cult classic Female Prisoner Convict #71: Scorpion (1972). Once again she would star in four of these films. The first was quite shocking for its age and while there was once again nudity involved in the role, the film has the look, plot and action of a run-of-the-mill exploitation film; it never the less has a great deal of style. The plot is set in a women’s prison after Kaji had been betrayed by her boyfriend and winds up being abused and raped in prison and as a result of her treatment plots her escape and revenge.

After making two gangster films that were known as The Wandering Ginza Butterfly (1972) and couple of other franchised yakuza films she appeared in: Battles Without Honor and Humanity: Hiroshima Deathmatch (1973) and New Battles Without Honor and Humanity: The Boss’s Head (1975), Kaji would go onto appear in her best known couple of films, the aforementioned Lady Snowblood films (1973 and 1974). Based off the Manga graphic novel, both these films follow the classic samurai revenge story pattern. Set in the late 19th century, ahe plays Yuki (Kaji), who’s mother is gang raped and dies after giving birth. Yuki grows up with revenge on her mind as she after she goes after the rapists . It’s classic samurai action film, but of course benefits from a female assassin who’s feminine looks, while wearing a classic kimono make her an unlikely but effective heroine. The follow-up film, Lady Snowblood: Love Song of Vengeance (1974), follows along similar lines. Now set in the early 20th century, Lady Snowblood is arrested and forced to become a spy when her loyalties are soon tested.

After the mid-1970s Meiko Kaji’s relatively short career shone less brightly and despite her move to more serious roles and moving into television work, which is less covered by the book. The book also has some focus on her music career; the theme songs to both Lady Snowblood and Female Prisoner Convict #71: Scorpion were both sung by Kaji and were used in Tarantino’s Kill Bill. Certainly in Japan, Meiko Kaji was a style icon and suitably the book has plenty of production stills. The book includes as well as a filmography, also has a discography and is layed out in such an easy read way while also an enjoyable read, making for a first rate introduction to the popular Japanese cult star. There are also sections that cover some of Kaji’s best known and regular directors.

It’s not a random release, but rathere a targeted one . 13 of Kaji’s films are available on Arrow Video as stand alone releases or as a part of a set. The book is written by Tom Mes, an authority on Japanese films who’s previous publications have included books on Takashi Miike and will appeal to aficianados and as an introduction to Meiko Kaji’s films alike.