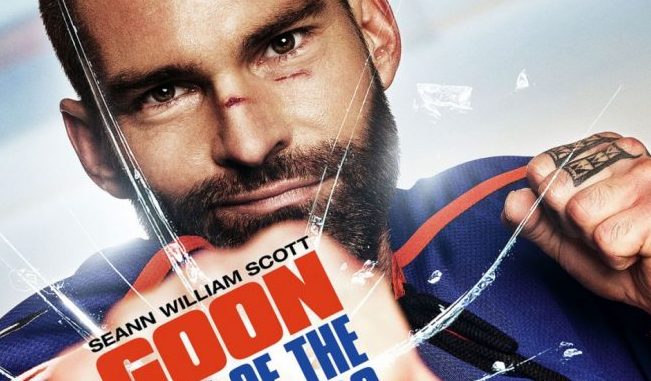 In 1977 George Roy Hill made a film called Slap Shot. This film was a black comedy about a failing ice hockey team and starred Paul Newman as the team’s tired and worn out coach. They find success by resorting to violence and outbursts of violence during matches. The film became a cult success that, while it might not exactly be Newman’s best known film was never the less one that has a popular following. The release of Goon (2011) and its recently released sequel Goon: Last of the Enforcers followed along similar lines, although, it has to be said is less successfully.

Goon: Last of the Enforcers follows on from where Goon left off. Doug ‘the Thug’ Glatt (Seann William Scott) has been promoted to the captain of his ice hokey team, the Halifax Highlanders and in his maiden speech as captain gives a singularly uninspiring speech that confuses his equally ill educated team mates. He is now married to his sweetheart from the first film, Eva (Alison Pill) who respects his love for his team and his passion for ice hockey but is growing increasingly concerned with all the violence he takes on the rink. She also reveals to him that she is pregnant and he is to be a father. Early in the new season Doug faces off against a rival team and is beaten senseless by their star player, the brick shit house sized Anders Cain (Wyatt Russell), who also happens to be the son of the Highlander’s owner (Callum Keith Rennie). To please his wife Doug reluctantly decides to take a job in an insurance company. He is given a desk in the basement in filing where he does menial tasks that sold to him as the ladder of success. Meanwhile, winos are peeing by the window and hookers are operating outside. Doug secretly quits his job and joins in an ice hockey fighting league (coming home each night smelling of hot dogs) where he bumps into his old rival, Ross ‘the Boss’ Rhea (Liev Schreiber) and the pair become friends. Doug’s right shoulder had been wounded in the knockout by Cain and has now become weakened, becoming his Achilles Heel, yet he still yearns to return to his old team mates who, sliding down the league are losing consecutive matches.

Like Slap Shot, both Goon films make light of sport injuries (that have in the past been fatalities to NHL players) and also portrays ice hockey players as lacking intelligence, much the way a black comedy about football or rugby might be played out in the UK (it should also be highlighted that these films are Canadian, with ice hockey being a national sport there). The original Goon film did offer a few surprise laughs. There are fewer genuine funny laughs in the sequel and, typically does not really develop the characters but instead does the lazy thing in repeating the formula of the first film. As ever Seann William Scott is the standout in the film, as he was in his most famous role in a gross out comedy, that of Stifler in the American Pie films. There is more depth to his character in the Goon films than Stifler and he does the vacant, but nice idiot quite well. Goon: Last of the Enforcers is not a bad film, it’s well acted with some but the script does let the film down and can have done with more black comedy rather than the lowest common denominator with its gross out comedy.