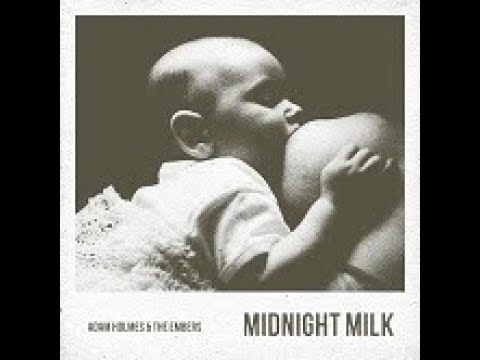 Midnight Milk is the third album from Edinburgh’s Adam Holmes and the Embers. Its mainly soulful feel gives it a soft and warm air, but there are plenty of other influences on display too. And a wide variety of instrumental backing across several genres sits behind Holmes’ tender vocals.

Despite its scope, Midnight Milk’s ten songs were recorded by Holmes in his bedroom. This is no lo-fi, acoustic, demo sounding collection. Rather there is a sweeping scope to some big songs that come with clear folk, reggae and hip hop influences. A brass band and even a children’s choir also show up – although we are assured that the choir was recorded externally as it wouldn’t fit into Holmes’ flat.

The concept of Midnight Milk is one of contentment and completion, we are told. This is achieved by babies through mothers’ milk (hence the album cover), but as adults we all have to seek it in different ways, looking for the rare moments of individual satisfaction that should be savoured. The songs represent Holmes’ own particular themes of desire and reassurance.

Opening track When Will I Be Free starts slowly before bursting into life with a hip hop style spoken vocal. Don’t Worry then takes things in a reggae direction, with deeper vocal delivery and a carefree feel. The album’s first single No Man Is An Island has a calypso beat and a warm feel, a good song with a clear message.

Big Blue Sun is soft and uplifting, its ska guitar rhythm combining with a big chorus to give it an inspiring quality. Strange Weather is similarly upbeat, displaying some nice wordplay in the lyrics. Whatever It Is You Do exhorts listeners to make the most of life, yet with a gentle air that speaks of a hard learned lesson passed on.

Adam Holmes has a deft songwriting touch and his warm, clear vocal delivery suits his music perfectly. Midnight Milk is a lovely collection of varied songs that fit nicely together. It’s not a concept album, but the themes running through the ten songs bind them together to form something that feels bigger and more significant.